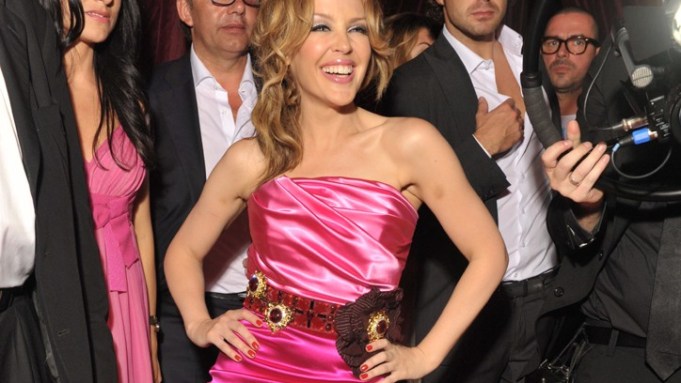 “Cannes is like the opening season; when there is Cannes, then summer begins,” declared Stefano Gabbana who with Domenico Dolce gave a lesson in party-throwing Friday night when the duo hosted their much-anticipated annual “Fabulous in Cannes” soiree.

As they arrived at the palm tree dotted Baoli club, dark shades were handed out to guests, including Eva Herzigova, Claudia Schiffer, and a pack of London It kids, led by Peaches and Pixie Geldof. “All the movie stars wore sunglasses in the Fifties,” continued Gabbana coolly as he sipped a vodka and tonic before being swept onto the mirrored dance floor by admirers. “And at the end of the night when you’re drunk, it’s always better to have a pair.”

Making a fashionably late entrance, Kylie Minogue, who had just performed at the VIP Club, entered the party in a hot pink Dolce & Gabbana bustier dress. “I am so glad to be here finally!” said the singer.

“[Just] don’t be the host,” said actress Paz de la Huerta, whose movie “Enter the Void” premiered earlier that day and who can also be seen in Jim Jarmusch’s “The Limits of Control.”

Alice Dellal said she’s more a partygoer than thrower. “If I did throw one it would involve a wicked DJ with lots of metal rock, a pick ‘n’ mix sweet corner, popcorn, strobe lights and a photo booth,” said the part-time model, decked out in jewelry by Dominic Jones, for whom she acts as creative director.

Model Portia Freeman, one of a handful of guests outfitted in Dolce & Gabbana frocks custom-made for the event, had her own ideas. “You need great music, to let people smoke so they don’t disappear and a mirrored dance floor,” she said. Check, check, done.