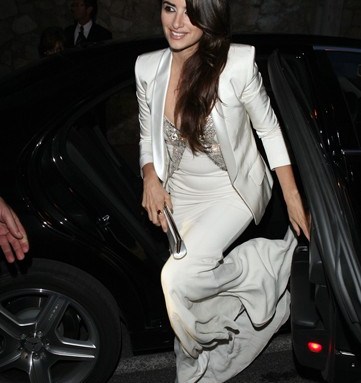 It doesn’t take much to confuse Paris Hilton. The heiress found herself confounded Monday night in Cannes when confronted with the Hollywood Domino charity tournament.

“I thought dominos was where you lined them up and they all fell down, but then my boyfriend was like, ‘No, there are numbers,’” said a perplexed Hilton. Luckily, the other guests at the Cannes House villa — including Lily Cole, Penélope Cruz and Elsa Pataky — seemed to understand the concept, and got into the spirit of competition as waitresses served up mini hamburgers and vodka shots.

Across town, Evangeline Lilly slipped into the Baoli club just in time for a bauble-laden fashion show at the Chopard Trophy party.

Earlier in the night, Hilary Swank and Marion Cotillard presented the Chopard Trophy Award — which knights hot new talent — to actor David Kross and French starlet Léa Seydoux at a ceremony at the Martinez hotel. All the stars and parties were just what young German Kross had been hoping for.

“Cannes is just as I had imagined with all the boats and the glamour — it’s crazy,” he said.

“The sets are so grandiose and there are four cameras rolling at once. It’s an incredible experience,” said the actress.

Swank took the opportunity to take a breather — and grab some food.

“I’m starving and the music’s so loud I can’t hear a thing,” shouted the actress, who was cramming handfuls of nuts into her mouth, her origami-esque silver Giorgio Armani Privé dress folded around her.

Asia Argento, meanwhile, said she was enjoying being in Cannes as a jury member rather than to promote a film. “It’s heaps less tiring as you don’t have to do interviews,” she said.

And presumably, it leaves more time for partying.