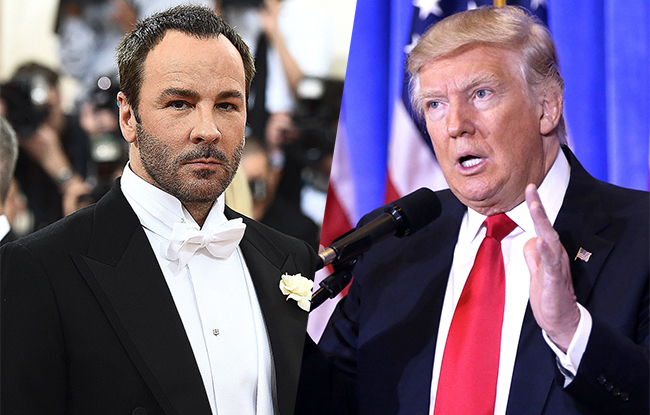 Thursday afternoon, the day before he will be sworn in as President of the United States, Trump was speaking at the Leadership Luncheon held at Trump International Hotel in Washington, D.C., when conversation turned to the designer Tom Ford. Once most of the media had been cleared out of the room, sources said that Trump began discussing how several musicians claimed to have turned down offers to perform at his inauguration, but were never invited to perform in the first place. He then made the jump to designers who have come out against dressing the Trump women.

“Tom Ford came out and said he was not dressing Melania,” Trump said, according to a source inside the luncheon. “He was never asked. I never liked him or his designs. He’s never had something to dress like that [pointing to his wife, who was in the room at the time].”

In an appearance on “The View” in November, promoting his film “Nocturnal Animals,” Ford was asked if he would dress Mrs. Trump. “I was asked to dress her quite a few years ago and I declined. She’s not necessarily my image,” Ford said. “Even had Hillary won she shouldn’t be wearing my clothes, they’re too expensive. I don’t mean that in a bad way; they’re not artificially expensive, it’s how much it costs to make these things. I think the first lady has to relate to everybody.”

Ford’s name is not the only brand to have voiced preference against dressing the soon-to-be first lady. There is a contingent of fashion designers, however, who have pledged to outfit the first lady as she likes, calling it an honor and even a duty. “Melania deserves the respect of any first lady before her,” said Diane von Furstenberg. “Our role as part of the fashion industry is to promote beauty, inclusiveness, diversity. We should each be the best we can be and influence by our example.”

“I think Melania is a very beautiful woman and I think any designer should be proud to dress her,” Tommy Hilfiger said of his willingness to dress Melania.

As WWD previously reported, Melania is expected to wear designs by Karl Lagerfeld and Ralph Lauren for upcoming events.

WWD reached out to a representative for Tom Ford for comment and didn’t hear back at press time.