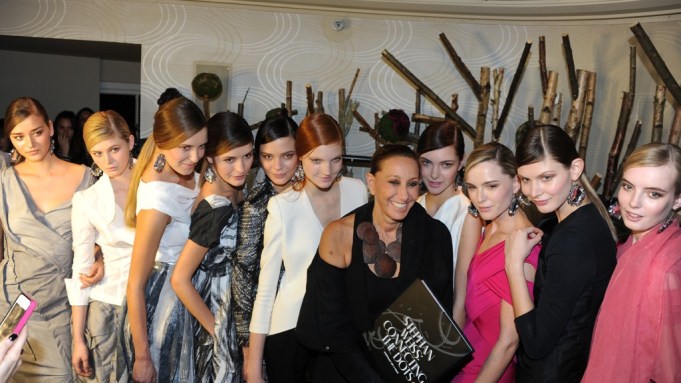 “You have a cool prince,” Donna Karan told a gathering of fans at Harvey Nichols. “I know Prince Charles, and it’s nice when your prince understands what you’re talking about.”

Karan, who made a flash visit to London this week to connect with customers, retail staff and local friends, was talking in particular about holistic health care, a pillar of her Urban Zen Foundation and a topic about which the British royals — especially Queen Elizabeth II and her eldest son — are passionate.

It was her first work trip to London in five years, and Karan spun like a top through the city, high on sun salutations, green juice and Starbucks’ chai latte. She flew around streets to appointments, hugging, enthusing, persuading, shaking hands and peppering all of her appearances with a big white smile and a chirpy, “Hi! I’m Donna.”

She snapped pictures on her iPad and gushed about her loves: Her late husband, guru and muse Stephan Weiss; her recent book about him “Connecting the Dots” — “It took me 11 years to do, I needed to be ready — he was my guy”; Haiti’s artisans, who made her favorite papier-mâché carryall; skinny stretch jeans; Balinese furniture, and yoga. “Maybe we should do a yoga studio and cafe on the top floor? I miss the cafe,” she said of the newly refurbished DKNY store on Bond Street, where the ground floor eatery has been replaced by a new handbag space.

By Wednesday night — during the closing cocktail party at the Donna Karan store on Conduit Street — she was chatting away dressed in a black drapy top and stockinged feet. She eventually put her black boots back on, but her toes were killing her.

Touching down at Heathrow early Tuesday directly from Los Angeles, where she was dressing Barbra Streisand in black sequins, Karan dropped her bags at the Halkin hotel (owned by her pal Christina Ong) and hopped across Belgravia to meet another old friend, Maureen Doherty, the founder and owner of Egg, the famously chic and minimal clothing and lifestyle shop on cobbled Kinnerton Street.

“I love Maureen; I feel at home there. She’s so pure. When I think of Urban Zen, I think of Maureen,” said Karan, referring to her charitable foundation. They sat on the floor and ate pizza.

The freewheeling conversation ranged from shoulders — “The only place you never gain weight is on your shoulder. It doesn’t get wrinkly, it doesn’t get fat. I LOVE shoulders,” she said — to health care, her weakness for bittersweet dark chocolate, conscious consumerism, Haiti and Hurricane Sandy. “Haiti is a metaphor for what is happening today. It doesn’t have to be Haiti for people not to have any homes,” she said.

Dinner was at Nobu with friends and the team, and the next morning she was up in the air — on the London Eye — for part of a television interview.

“It’s brilliant, better than a plane,” the designer said of the Ferris wheel a few hours later at the DKNY store on Bond Street, which was raising money for Urban Zen’s Hope, Help & Rebuild Haiti initiative.

Guests, who were invited to decorate papier-mâché hearts in aid of the cause, included Francesca Versace, who was meeting Karan for the first time. “I’m really excited,” said Versace, the niece of the late Gianni and a graduate of Central Saint Martins, who’s set to unveil her first design collaboration with an Italian brand early next month.

While Karan had high hopes for that afternoon, including a stroll through Mayfair — “I love the fact that you can see the sky in London; you can feel closed in in New York” — she spent her window of free time talking to customers and her DKNY retail and sales team.

There was only time for a lightning visit to Selfridges before she had to rev up again for a talk with VIP clients at the Donna Karan store, followed by cocktails and later dinner at The Arts Club on Dover Street.

She’ll be back, though: Karan has already said her dream is to start an Urban Zen in London. “I do think it’s time for London right now — I’ve seen it grow. It’s such an inspirational city.”