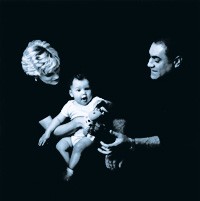 LONDON — Alison Jackson, the award-winning English photographer famous for her voyeuristic, celebrity portraits and short TV films featuring look-alikes of Marilyn Monroe breast-feeding; Queen Elizabeth on the toilet with her underpants around her knees, and Elton John undergoing colonic irrigation, is taking on U.S. politics.

“Election Year 2004,” which opens tonight at the Julie Saul Gallery in New York, features such images as a President Bush employing Tony Blair, posed on all fours, as a horse mount, or using posters of Osama bin Laden and Michael Moore for target practice.

“I’m trying to get under the skin of the public mind and look at what’s in there,” says Jackson over a cup of tea in the sitting room of her airy Chelsea home. A fire is roaring and Slipper, her Prince Charles spaniel, is snoring beside her on a white sofa.

Jackson caused a furor — and made her name — in 1998 when, as a master’s student at The Royal College of Art in London, she created a family portrait of Princess Diana and Dodi Al Fayed look-alikes holding their “child,” a dusky baby with a full head of black curly hair.

“When Diana died, it was a major moment in terms of English culture and photography. Diana had sold a construction of herself: a beautiful clotheshorse, a blonde icon, and I realized the public was mourning a set of photographs,” she says.

Jackson’s goal is to expose how manipulative that imagery can be. “We are living inside a world of photography, and I am proving that photographs lie, or they tell only a part-truth.”

She recently took a double of the British soccer player David Beckham to Tokyo for a shoot, and the crowds went wild, even after she revealed the man was a look-alike. “They didn’t care. They still wanted to sit on his lap and kiss him. In Madrid, they chased him down the street.”

The photos, which are often blurry and grainy as if they’ve been shot by one very lucky paparazzo, each take a week to create. As for the cast of doubles, they come from agencies or from Jackson’s own scouting missions, when she happily chases potential look-alikes down the street.

Jackson doesn’t like being called a satirist. “I’m an artist and I’m trying to say something,” she explains. “I’m not trying to ridicule anyone, and I’m not necessarily trying to be amusing — but I do find that humor is a useful tool.”

As for the coming U.S. presidential election, she’s already found a Kerry look-alike in case he wins. “We’ll photograph him having his hair blown dry — and sprayed,” Jackson laughs.