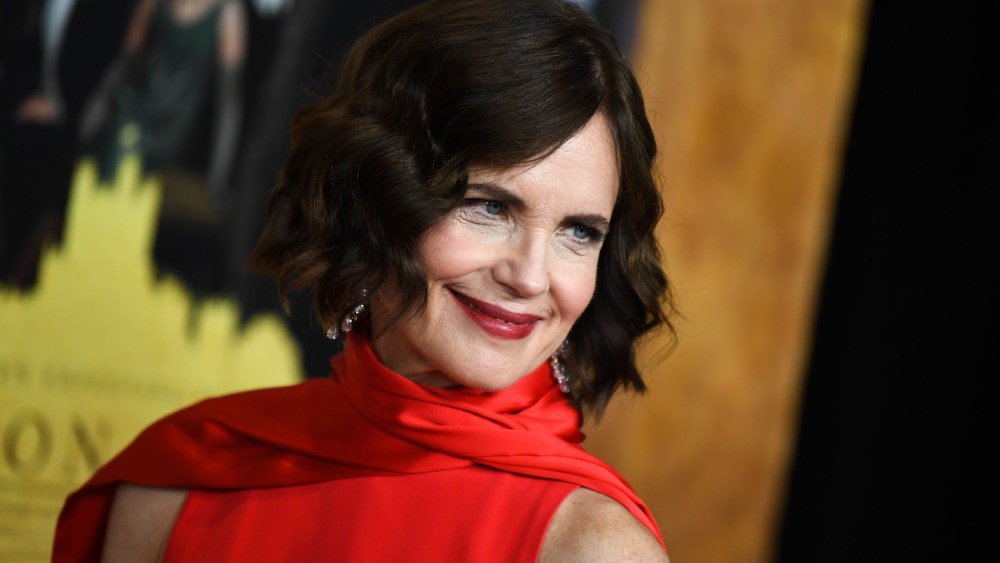 True to its montage of characters, classes and conundrums, Monday night’s “Downton Abbey” movie premiere in Manhattan required a certain degree of dressing for the part.

Leads like Elizabeth McGovern, Michelle Dockery and Laura Carmichael made the rounds in designer gowns and guests attending the Alice Tully Hall screening suited up in New York City’s unofficial coat of arms: all-black ensembles. In a sequined blue gown, Sophie McShera, aka Daisy Mason, palled around with Lesley Nichol, aka Mrs. Patmore, who had ditched the apron for black Lurex. Wearing a three-piece pear green-colored linen suit on the red carpet, Hugh Bonneville looked like the eye of a dart board. The Lord Grantham actor explained, “We were told not to wear tuxedos because apparently in America that sends the wrong signals. We insisted on wearing tuxedos on the London red carpet because that’s the British style. So here we were told to go a little bit more bonkers. Since Lord Grantham is the most conservative of the characters, I thought, ‘Let him be more bonkers.'”

And so it goes, Bonneville kiddingly trumpeted his designer choice. “I’m wearing Mat Whitley. Mat Whitley of London. Whitley of London.” Flashing the interior of his jacket in search of a label, the actor shrugged. “It doesn’t even say it. Probably they forgot it. Anyway — Whitley.London on Instagram, I think. Check it out.”

Raquel Cassidy, who plays Miss Baxter, was less certain about the provenance of her multitiered spaghetti strap dress. “OK, that’s the one question I can’t answer. I am so sorry. I should know this. I have all of it. It’s written down. I would like to say I’m drugged up to the eyeballs, because I’ve got a really bad cold and that that’s my excuse. It is in my phone but my phone doesn’t fit in this bag. I will never do this again on the red carpet,” she said.

In a shop-bought sapphire blue suit, Kevin Doyle, aka Mr. Molesley, said his butler-turned-footman role had its advantages. “Men’s dressing was easier than the women’s dressing. When this show started in 1912, everybody was sort of corseted up and made to look sort of stiff and proper. I can’t imagine getting through the day like that. But they did. And they would change clothes six or seven times a day. Can you imagine that? It must have been intolerable, having to dress for breakfast, dress for lunch, dress to go out and then dress for dinner? Men have it a bit easier, but they still have to get changed. The servants have an easier life. They don’t have to change.”

In an Amanda Wakeley striped gown, Phyllis Logan was unrecognizable to her Mrs. Hughes character. Although she does not know the British designer, the actress said, “I’m hoping to get to know her personally because I’m loving my dress.”

All along the uncharacteristically civilized red carpet, the cast sportingly and earnestly responded to questions. The man who made all of this possible — writer and producer Julian Fellowes — said, “We’re living through such a strange present at the moment. Sometimes we feel the past must have been calmer. I don’t think it was particularly. Actually, the period we’re depicting was one of great social change, which we do touch on in the movie. Sometimes looking at other periods seems to give you a kind of comfort. I suppose that’s true a bit of ‘Downton,'” Fellowes said. “The main appeal of any series — whatever it’s about — is the characters. If you’ve got the right mix of characters and actors playing them — key factor — then people come back for more. They’re curious. How is it going to work out? Are they going to be happy? Are they going to be OK? I think that’s true whether it’s ‘Mad Men,’ ‘The West Wing’ or ‘Downton Abbey.’”

Although Maggie Smith sat out the New York premiere, Fellowes gamely agreed to share his favorite bon mots from the Dowager Countess. “I like in the movie very much when she says — it sounds rather vaguely braggart for me to do this — any way. ‘I never argue, I explain.’ Because it reminds me of lots of people.”

Penelope Wilton showed how millinery can be used to make a point. As Lady Isobel, her costumes were originals or remakes of originals culled from the John Bright Collection in London. “Hats can do things that nothing else can. If you dislike somebody and want to end a conversation, you can completely cut them off,” she noted, turning slightly as if wearing a side-brimmed hat. “I don’t watch many royal proceedings, but they do wear wonderful hats. I think hats should make a comeback.”

One eagle-eyed media type spotted Highclere Castle’s current owner George Herbert, 8th Earl of Carnarvon, on the red carpet with his wife. Another Downton Abbey-related IRL couple included Carmichael and Michael Fox, who acts as the servant Andy. Wearing an Oscar de la Renta thigh-baring gown, Carmichael admitted that she ended the series with a keepsake. “On my last shooting day, I took a handbag. I was given it, I have to say. I sound like I stole it. The costume designer had been up all night so maybe her judgment wasn’t as strong. But she let me have it from the scene at The Ritz with Bertie. It is a beautiful, original, beaded purse. I treasure it.”

Imelda Staunton turned up with her husband Jim Carter, who plays Mr. Carson. A newcomer to the cast as Lady Bagshaw, Staunton said the job made for a welcome commute. “It was nice to go in the car together in the morning. He was at one end of the dining room and I was at the other so we didn’t really get to work together as such. It was such a thrill just to go into work together.”

Other freshmen on the set were Max Brown as Richard Ellis and Simon Jones as King George V.

Jones said, “Being a king really depends on the way other people respond to you — you are just there. There is quite a lot of regalia, and that was also custom made. That gives you a certain status. But the status is what people give you. You don’t have to do anything. In fact, [it’s what] the royals do even today. I kept asking things like, ‘Look, when I go into the house, am I going to leave all this gravel in the hallway?’ ‘Yes,’ said our royal adviser. ‘Somebody else will pick that up.’ I asked, ‘Should we put the lid on the pen?’ ‘No, leave it — somebody else will do that.’”

Jones continued, “That explains why Princess Diana got rather annoyed with Prince Charles — to say the least — when she saw he threw all his clothes on the floor. And he was completely mystified when she complained, because someone there would pick it up. If you pick it up, you are taking away their job.”

As for whether any of the cast will have reason to work on a “Downton Abbey” sequel, Fellowes said fans are already asking about a follow-up. “But I don’t think we can make any real decision about that, until we know how this movies goes over really. Then I suppose we will sit down, if it does goes well, and have a conversation.”