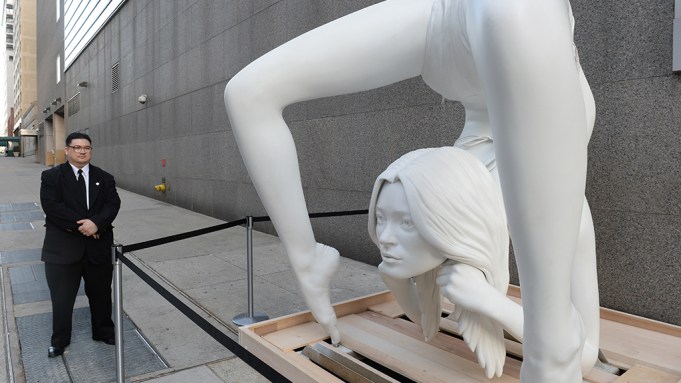 At the ripe age of 28, Aubrey “Drake” Graham has accomplished more than many artists dream of: three platinum albums, including “Take Care,” which was certified double platinum; four hit headlining tours, including one with generation-defining peer Lil Wayne; and one very scandalous make-out with Madonna. That’s a feat many can claim, but none with nearly as much controversy as our dear Canadian heartthrob. When the Queen of Pop kissed him at Coachella, his reaction was so comically absurd, it’s still generating headlines and memes.

Now Drake is adding curator to his list of career highlights. He personally selected music to accompany each of the works from contemporary black American artists at Sotheby’s new exhibit, “I Like It Like This.” So on Thursday, when the exhibit opened, you could take in a black and white abstract Glenn Ligon painting or one of Kehinde Wiley’s exuberant canvases while listening to Drake’s own “Wu-Tang Forever” or A$AP Rocky’s “Multiply,” respectively. Even Drake’s on again, off again girlfriend Rihanna got placement, with her latest single “B—h Better Have My Money” paired with a collection of paintings, including one of a mermaid and another that simply read, “They tried to whisper sweet nothings.” Perhaps a hint that the relationship is currently back on?

Good luck asking Toronto’s favorite native son about that. For the first hour of the exhibit’s opening, he remained secluded in an unseen “green room.” When he finally materialized, a pair of burly bodyguards blocked his every move. The million-dollar Jean-Michel Basquiats on display may have been accessible, but Drizzy was defiantly not, which of course, made him more alluring to the crowds who turned out to see him.

“I heard Drake’s not even doing selfies,” said one plebe, dejectedly taking a sip of her martini. She wasn’t alone. “I have every one of his albums and mixtapes,” said a gushy Michael Strahan, who along with Jacquelyn Jablonski, Hanne Gaby Odiele, Swizz Beatz, Scout Willis, Cynthia Rowley and Kate Foley, seemed content with snapping Instagram shots of “Champagne Papi” from afar. “I have all of it. I can’t say any particular one, because then I’ll be mad that I limited myself.”

After chilling out by the DJ, the artist formerly known as Aubrey took off around 9 p.m., right on cue. There were new hit songs to record, aging pop stars to kiss, and, for what it’s worth, RiRi was in town.