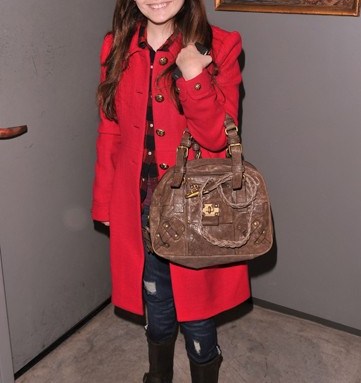 Pretty actresses under 30 don’t exactly have a hard time finding roles in Hollywood. Which is why it’s remarkable that at least five screen starlets have chosen to tackle more challenging roles and tread the boards on Broadway. From budding theater buff Alison Pill to the barely PG-13 Abigail Breslin, these ladies are out to prove their talents lie beyond bright eyes and dewy complexions.

Ever since her first film, the 2002 “Signs,” in which she played Mel Gibson’s daughter, Breslin has racked up some pretty famous on-screen child guardians. In “Little Miss Sunshine” (for which she scored Oscar, SAG and BAFTA nominations), Toni Colette and Greg Kinnear supported her beauty pageant dreams; Kate Hudson gained custody of her after her mother’s passing in “Raising Helen,” and last summer Cameron Diaz and Jason Patric struggled when she sought medical emancipation from them in “My Sister’s Keeper.” And coming soon, she’ll add Elisabeth Shue to her list in “Janie Jones.”

However, in her stage debut in “The Miracle Worker,” the parental units fall to the wayside, as the 13-year-old takes on the role of Helen Keller in the first Broadway revival of William Gibson’s famous play.

“The Miracle Worker” begins previews Feb. 12 at the Circle in the Square Theatre, 235 West 50 Street.

With her moon face and waifish physique, Pill has lent a dose of wrenching vulnerability to a slew of darker-than-average fare. She made her Broadway debut in 2006 in Martin McDonagh’s blood-ridden comedy “The Lieutenant of Inishmore” (earning a Tony nomination) and a year later was going head-to-head with Jeff Daniels in the pedophilia-themed “Blackbird.” Neil LaBute put her to excellent use in the off-Broadway version of “Reasons to Be Pretty,” in which she spouted more expletives than a truck driver; Theresa Rebeck’s “Mauritius” had her sparring over a stamp collection, and on the big screen in “Milk,” she infused her lesbian gay rights activist character with both fortitude and sweetness.

Come February, the 24-year-old Toronto native will return to Broadway as the consummate caregiver, Annie Sullivan, in “The Miracle Worker.”

“The Miracle Worker” begins previews Feb. 12 at the Circle in the Square Theatre, 235 West 50 Street.

Don’t let that innocent, porcelain-skinned face fool you: Wood clearly has a taste for the moody and macabre. Her Golden Globe and SAG-nominated breakout in Catherine Hardwicke’s 2003 “Thirteen” had her drugged and drunk as her stricken mom (Holly Hunter) looked on. She’s also worked her good girl-bad girl skills as one fifth of the dysfunctional family in “The Upside of Anger,” a naughty schoolgirl wreaking havoc in “Pretty Persuasion” and a pill-popping shrink’s daughter in “Running With Scissors.” And then there’s her personal life: current flame Marilyn Manson (to whom she is reportedly engaged), and a past rumored relationship with her “The Wrestler” co-star Mickey Rourke.

But Wood can do more than just sulk and consume illegal substances on screen, as she proved in Julie Taymor’s musical film extravaganza “Across the Universe.”

The 22-year-old Raleigh, N.C., native is teaming up with Taymor again for “Spider-Man Turn Off the Dark,” a Broadway musical with a score by U2’s Bono, in which she plays the clean-as-a-whistle Mary Jane Watson.

Though often seen capitalizing on her ripe lips and curves for directors like Woody Allen, Sofia Coppola and Brian de Palma, this New York native actually got her start off-Broadway in “Sophistry” when she was a mere eight-years-old. Her blossoming film career has since seen her seducing audiences as everything from a traumatized equestrian in Robert Redford’s “The Horse Whisperer” to a homesick wanderer in “Lost in Translation,” which earned her a BAFTA award (to add to her four Golden Globe nominations). The 25-year-old has also seen her assets celebrated in print, topping more “Hot Lists” and “Sexiest Woman Alive” compilations than most of her contemporaries combined. For her Broadway debut, she stars in the revival of Arthur Miller’s “A View From the Bridge” as Liev Schreiber’s 17-year-old niece, Catherine, with whom he is madly in love. When she falls for another guy, disaster ensues.

It would be easy to chalk up Kazan’s prolific career to a bit of nepotism. Mom and dad are both screenwriters-producers-directors and she is, after all, the granddaughter of Elia Kazan. But the girl’s clearly got some game of her own. In the past three years alone, she’s appeared in the films “The Valley of Elah,” “Revolutionary Road,” “The Private Lives of Pippa Lee” and “It’s Complicated,” and has hit the floorboards in “Things We Want” (where she met current flame Paul Dano), “Come Back, Little Sheba” and “The Seagull.” She’s also penned some plays of her own — including “Absalom,” which premiered at the Humana Festival of New American Plays in Louisville, Ky., last year — and has shot the upcoming flicks “Meek’s Cutoff” with Michelle Williams and Dano, and “HappyThankYouMorePlease” opposite Malin Akerman and Kate Mara.

Next month, the 26-year-old will call on her seemingly limitless energy in Martin McDonagh’s “A Behanding in Spokane.” Christopher Walken plays a man searching for his missing hand and Kazan stars as one of two young con artists out to score some dough.