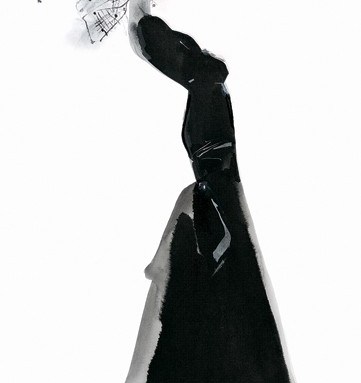 Digital cameras and cell phones may be viewed as the golden recorders of today’s blink-and-miss-it fashion age, but, armed with nothing more than the humble brush-pen and ink, David Downton is on a mission to defend the noble art of fashion illustration.

During London Fashion Week, Downton launched his second magazine dedicated to the craft and its masters. Dubbed Pourquoi Pas? (or Why Not?), the 76-page work features golden-oldie profiles of René Gruau and Tony Viramontes, one of the defining illustrators of the Eighties, seen, respectively, through the eyes of fashion critic Suzy Menkes and milliner Stephen Jones, as well as a Q&A with the contemporary illustration “genius” Christian Lacroix.

In lieu of watercolors or ink, Lacroix is one of the few established designers who have perfected the technique of computer-generated fashion sketches. “What used to paralyze me—the wasted paper, the irreversible or ill brush strokes, the uncoverable blunders—have all evaporated,” Lacroix says.

Next spring, Downton will stage a fashion-based exhibition of black-and-white large-scale drawings at London’s Mayor Gallery on Cork Street. “Illustration is still extremely popular with designers and the public alike, but remains generally undervalued and under the wire,” says the artist.

A hunched front-row fixture on the couture circuit, Downton regards illustration as a unique means of immortalizing the spirit of a collection or event, that’s equally as valid as images produced by the pack of snappers camped at the end of each runway. “It’s another point of view—with the best illustrator, you have a single vision. That old cliché of eye, hand and heart is what you engage with drawings; it’s a really personal sensibility,” he continues, adding that very few tools are required. “Whereas photography [involves] a whole production process, here you have somebody drawing. It’s that elemental.”

A prolific fashion illustrator, Downton’s accomplishments in the field include being invited to “record” Chanel’s métiers d’art collection in December 2007, as well as a couture spread for V magazine in 2005 featuring Linda Evangelista. The seven-hour-long sitting took place at Paris’ George V hotel. “I got to pick the clothes. It was like fashion illustration once was, with hair and makeup…the works,” recalls Downton, who churns out hundreds of drawings for his series before returning to his studio, based in a former newspaper office in Brighton, England, to work on the final selection.

Unceremoniously usurped by photography in style magazines during World War II, fashion illustration continues to flourish across a variety of media including flyers, textiles and posters. The last two years in particular, according to Downton, have seen an upswell in interest, with a variety of artists tapped for brand collaborations. These include James Jean for Prada’s fairies collection this spring, and Tanya Ling, whose prints feature on Louis Vuitton’s cruise 2009 collection.

Like the dramatic art-world ascent of once-off-the-radar graffiti artists such as Banksy, the niche genre of fashion illustration is set to take off with a spurt in collectors of original works. “There is a market for it, but because these artists are principally focused on fashion illustration, they’re often categorized out of exhibiting opportunities, so I’m filling that niche,” says William Ling of London’s  FashionIllustrationGallery.com, which opened in April 2007. He adds that, whereas historically illustration was a hand-drawn or painted art, new takes center on hybrid digital and hand-drawn techniques, either done by hand or computer. Ling discloses he’s busy working on what he claims will be New York’s biggest fashion illustration exhibition, due to open in February at an undisclosed venue.

“Fashion illustration is all over the place, but it’s not in the place where you used to find it,” comments Downton, alluding to the craft’s heyday in the early 20th century when leading artists—including Georges Lepape, Etienne Drian, André Edouard Marty and Erté (Romain de Tirtoff)—were the first port of call for fashion magazines such as La Gazette du Bon Ton, Harper’s Bazaar and Vogue. “They were the Mario Testinos, the Steven Meisels [of the day]. Paul Poiret commissioned several fashion drawings and textile print designs from artists including Paul Iribe, Georges Lepape, Raoul Dufy and Erté. At the time, photography was not considered an art form but a method of recording,” says Downton, citing as example the illustrator Carl Erickson, who enjoyed a 30-year contract with Vogue from the Twenties to the late Fifties.

Erickson’s delightful watercolors included one of two bathing beauties in front of a striped beach tent, commissioned for the cover of Vogue’s “hot weather fashions” issue of July 1, 1934. “[Erickson] would stay at the Ritz and charge shirts from Turnbull & Asser. They were artists and had a first-class lifestyle,” marvels Downton.

With a new generation of photographers nipping at its heels, illustration’s spell over fashion began to fade during the mid-Forties, with Vogue’s Edna Woolman Chase declaring illustrators too costly and difficult to deal with. “In the Thirties, photographers such as Man Ray were exploring extremely innovative ideas with photography and were trying to apply it to fashion,” says Cally Black, author of 100 Years of Fashion Illustration. Photographers, in hot demand, successfully bumped illustrators from the front covers of style bibles, with the genre largely relegated to the accessories and lingerie sections by the Sixties. But it was René Bouché’s death in 1963, according to Black, that truly marked the end of an era.

A few nods to the art have surfaced since, including the avant-garde style magazine Vanity in the Eighties, edited by Anna Piaggi, and La Mode en Peinture, the illustrated fashion magazine in the Eighties published by Assouline.

Downton’s own accidental foray into fashion illustration can be traced to July 1996 when, as a 37-year-old freelance illustrator, he was sent by The Financial Times to sketch a Versace couture show held at the Ritz hotel in Paris. “It was like stepping into Narnia. I had no idea that this spinning universe existed,” he says, recalling with a guffaw his bungled attempts to capture the likes of Kate Moss, Naomi Campbell, Linda Evangelista and Shalom Harlow sashaying across a marble catwalk stretched across the hotel’s swimming pool. “I couldn’t get the rhythm of it at all well,” he says, adding that even today the form is hit and miss—producing one drawing for every 10 that are “rubbish.”

Downton honed his craft by “bluffing his way into off-limits fittings and show rehearsals where he would knock out preliminary skeleton sketches using a brush pen and Rotring ink or “anything that will make a fast, indelible mark.”

But for all his support and creative liberty at a time when the art has no received style, no one way of working, Downton concedes that it’s unlikely that illustration will ever rise again to become fashion’s dominant recorder.

“What is fascinating is that everyone loves it, but they don’t know what to do with it. Valentino would allow me in to draw because he loves drawing, but he wouldn’t necessarily have used it in a campaign,” says Downton, recalling an exchange he had recently with a model backstage at a Dior couture show. “She saw me sketching, came over and exclaimed, ‘Oh, that’s so new,’ and I thought, no, it’s so old,” says Downton. “I found it quite sweet. It is sort of unusual, I guess.”