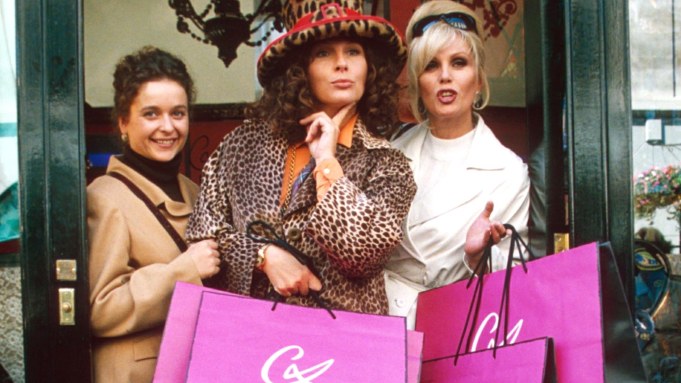 LONDON — Costume designer Rebecca Hale created the lavish looks for the cast of the British TV series “Absolutely Fabulous,” which aired on BBC from 1992 to 2012 — and she’s come back for more. Hale has created the wardrobes for the upcoming film, looking to emerging and established British designers to dress every member of a cast that includes Jennifer Saunders, Joanna Lumley and Jane Horrocks.

Here, Hale talks about how dramatically fashion has changed since the first episodes of AbFab aired, and how social media has shaped her creations.

WWD: How did you prep for the movie?

Rebecca Hale: I did an initial mood board and I looked at all the current collections and also the graduate, postgraduate and the arts school shows because I really wanted to incorporate the latest young designers, as well.

WWD: Did you take the actors’ opinions on board?

I then talked to all the actors about the images they liked. You gradually start to build costumes. I went to vintage fairs, looked at old clothes, new clothes, current collections and I approached designers. For Jennifer, although she always used to wear [Christian] Lacroix, we thought it would be great for her to always be either in Vivienne Westwood or Stella McCartney and playing with other designers like Ashish and Henry Holland.

WWD: How did you shape the wardrobes of some of the other stars?

R.H.: With Jo [Joanna Lumley], we approached more classic people, people like Mulberry and Jaeger and also the high street because she likes to wear high street a lot. We looked at pieces from Topshop.

Bubble [Horrocks] was a completely different thing, I saw how fashion has changed since I did “Ab Fab” in the early 2000s. At the beginning of the Millennium, the high street became sophisticated, they started to pinch ideas from every single top couture designer. There was the explosion of Topshop and Zara. I thought that was something to look at and also social media and reality TV, which have all exploded since then.

WWD: Can you talk more about how you dressed Bubble?

R.H.: With Bubble I wanted to create a costume that somehow evoked social media and then I looked at reality TV shows, of course the obvious one last year for me was that all they ever seemed to do was talk about the size of a certain Kardashian’s bottom, whether it was Khloé’s or any other member or Kim’s, all those famous shots. So I had this idea of making these shorts with a much larger bum for Bubble and then I collaborated with Vin + Omi and they created the “hashtag” outfit.

She has other things, as well, but I wanted that outfit to have a selfie stick, so that’s really a nod to how life has changed so much. Everyone is so much more self aware, they like taking selfies with each other or of themselves, their bottoms. Everything is much more self-obsessed than it was 15 years ago, so that was one aspect of it.

WWD: What did you do for Saffy?

R.H.: There’s the contrast with looking at someone like Saffy, who hasn’t really changed. She’s just grown a little bit more mature and her daughter, Edina’s granddaughter, is just like a normal kid, really a little teenager, a kid who’s brought up in London. So there were all sorts of variables that I looked at and I wanted it to be a large brushstroke over society really.

WWD: How much did Saunders and Lumley get involved in the wardrobes?

R.H.: It’s interesting, they’re very involved — but they’re very free. They give you a huge amount of creative license so my inspiration really was looking at where “Ab Fab” originated, so that was back in the Nineties. I looked at how they were in the Nineties and in those days everything looked much more outrageous. What Edina wore looked much more outrageous, whereas the fashions have caught up. I looked at all the big Chanel necklaces, the tailoring, the Lacroix and I thought that there’s a lot out there now with other designers. Then I thought I’ll make something sleeker, toned-down because everything is much more outrageous now. So that was kind of my inspiration. There were some pieces from Vivienne Westwood that were tailored and Stella does beautiful tailoring that Jennifer looks good in, and then some vintage pieces from Gaultier because she’s always worn Gaultier as well.

WWD: What about Lumley?

R.H.: If you look at the original series, everything was by Betty Jackson, essentially, so I tried to have elements of Betty in the clothes that we picked. We used a piece from Mulberry and it was a longer, lined jacket with beautifully cut trousers, all in cream. Then I had a longer Lanvin cardigan, so it’s very soft, although she acts tough, so it’s quite interesting with Patsy. You can see that all the snarling and the cheering and the drug taking contradicts how she looks in a funny way and people’s impression of her isn’t that. But if you were to really analyze what she wears, it’s generally a lot softer and Jennifer is more about the sort of outrageous, brighter, ridiculous looks.

WWD: How are the real-life designers involved in the film?

R.H.: Giles Deacon very kindly allowed us to film all of his fashion show, and that was pretty amazing, and we had another instant where, in the film, Patsy, along with the magazine that she works for, was putting on a fashion party for this designer, a minimalist designer. So again, I wanted to include younger designers so I asked the University of East London to create all the designs. We collaborated with them, we had a sort of think tank going and they produced everything for that party. For Bubble’s outfit, I used Yasmeen Udin. Her postgrad show was amazing and she’s fresh out of college so her outfit was perfect. I don’t really want to describe it too much because it would spoil the surprise. Then also Sibling, and Ashish was worn by Edina.

WWD: Can you talk about outfitting the supporting actors and cameos? Did you dress them as well?

R.H.: I dressed everybody. I did some mood boards for [the American actor] Chris Colfer who was playing Christopher and he loves all of that. The thing is you never have any time when you get them. He literally flew in, I fitted him the night before, he loved it, thankfully, and he was on set the next day. My inspiration for him was fashion bloggers like Bryan Boy and anyone you see in the front row, although he’s meant to be a hairdresser. That’s where I got my initial inspiration from.

Then for Lola, who goes to France with Jennifer and Patsy on this adventure, I put her in Topshop and Zara, Kids Zara and very ordinary clothes: jeans and trainers. But when she goes to the fashion party, I wanted to use Shrimps because I think that’s a current, young brand and it’s very easily identifiable.

I used Shrimps a lot throughout the movie for the background cast as well. For the fashion party everyone was really generous, all the British designers, the natives, gave clothes to be worn.

WWD: Did you do any bespoke designs?

R.H.: For some people, I did make bespoke clothes. I designed everything and we just had everything made for Magda — the character is played by Kathy Burke. She wore capes, Jennifer gave me the nod toward Glenda Bailey, who always wears capes and sort of simple lines, so that was a really nice look.

WWD: What was your greatest challenge working on the movie?

R.H.: Prepping a movie from Sept. 1. It was badly timed. Every single designer was taken up for four weeks and you’ve got no feedback really because they’re busy either selling or doing their fashion shows. The challenge was not knowing what I was going to get or whether I was going to get it or whether it would fit. The rest was a joy.

WWD: In addition to the fashion, what other entertainment does the film have in store?

R.H.: Well, the normal ridiculous things that they get up to, they’re very naughty! It’s much more glamorous because it involves going to the South of France. So you’ll have the normal “Ab Fab” — but with a lot more glamour.