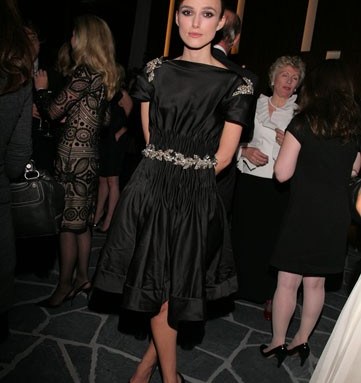 Smack dab in the middle of fashion week, the Cinema Society teamed up with Vogue and Chanel on Wednesday to host a screening of “The Duchess,” starring Keira Knightley.

“She was a huge fashion icon so I would hope she would approve [of the timing],” said the starlet of her onscreen persona, 18th century British royal Georgina Cavendish.

“My ribs have just about recovered,” said the actress of the heavy-duty corset she wore throughout, “but in the film you can see marks it left on my back.”

Certainly, there were many in the fashion-heavy crowd at the after party at the new Cooper Square Hotel who could sympathize with suffering for the sake of style. Coco Rocha, for one, will be wearing a corset in the Zac Posen show tonight.

“It takes me about two hours to get into those,” said the model, “once you factor in time for the smelling salts.”