In Chicago for a concert, the band's bassist John Taylor talks about longevity, performing — and why fashion matters. 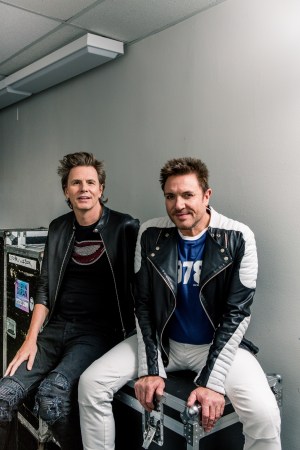 CHICAGO — “I don’t really feel that we’re pioneers. We just stepped on the train at a certain point,” said John Taylor, cofounder of Duran Duran, the legendary New Wave band that helped define the MTV era of the Eighties with hits like “Girls on Film,” “Hungry Like the Wolf” and “Rio.”

Taylor — who is touring with fellow band members Simon Le Bon, on vocals; drummer Roger Taylor, and keyboardist Nick Rhodes, who missed the Chicago concert to return to the U.K. for a family matter — says the band still considers itself music trailblazers. In Chicago, Rhodes was replaced on keyboards by MNDR, a friend and Duran Duran collaborator.

“You really don’t know for years how something is going to stand up and for so many years we rated our music by how well it sold and now we’d be a fool to do that,” says bass player Taylor. “‘Paper Gods’ has put vitality into the fan base for sure. Talk about uptick. We’ve had a massive uptick from the last time we were touring America.”

The band is touring with its opening act, disco band Chic and Nile Rodgers, and they performed two nights at Ravinia, each show drawing crowds of more than 15,000 people with young Duranie fans in the audience. Taylor credits the Internet and the way people are listening to music now for giving the decades-old Duran Duran hits an ageless, contemporary feel.

“Radio had a way of putting music in a time,” he says. “‘We’re going to go back to ’78 now for blah, blah, blah.’ ITunes’ shuffle has flattened out time. For us, our older music doesn’t sound so old.”

“It’s true to our roots. It’s groovy pop with a dark underbelly,” Taylor says. “We don’t feel tied to a sound that is one particular specific style. That’s one of the blessings of being in this band, but it’s also one of the challenges.”

For a band that originally shunned electronics in favor of showcasing their instrumental talent, the album shows Duran’s electronic dance music muscle with tracks like “Last Night in the City” — sending fans in the audience on Saturday jumping and singing all the lyrics: “I’m not going to sleep tonight/Till the morning fills the sky/No one’s getting left behind/This is our time/This is our time.”

Whether to use electronics is a constant battle, Taylor says.

With a roster of chart-topping hits like “Rio,” “Save a Prayer” and “Hungry Like the Wolf,” the British rockers could have rested on their pop music laurels, but that’s not in Duran Duran’s DNA, Taylor says.

Taylor, who grew up listening to The Beatles, Rod Stewart, Queen, Roxy Music and David Bowie, says his experience seeing bands early on helped define the look and sound of Duran Duran.

While Bowie had to unveil a new look for every album, Duran Duran had to create a new look for each video, Taylor says. Take “Rio.” To this day, the music video, featuring the band in colorful Antony Price suits on a sailboat in the Caribbean, remains one of the most iconic of all time.

“Fashion, we just soaked it up, all of us,” says Taylor, adding that the band is wearing pieces from Saint Laurent and Balmain on the current tour, mixed in with band T-shirts designed by Alex Israel, a Los Angeles artist who created the album cover. “Bowie looking the way Bowie looked, Freddie Mercury looking the way he looked and Johnny Rotten looking the way he looked: How could you not think what you wear isn’t important? It wasn’t enough to be just a great artist. You had to have a look that defined you, that put you apart. That was good for us.”

And he and Le Bon are surrounded by fashion all the time, given that Taylor is married to Gela Nash, cofounder of Juicy Couture, while Le Bon is married to model Yasmin Le Bon and their daughter Amber is a model in her own right.

Touring with Nile Rodgers, a Grammy award-winning artist who has worked with everyone from Daft Punk to Madonna, has been unbelievable, Taylor says.

“I don’t want to ever play with anybody ever again,” Taylor says. “It’s just amazing. It puts me in touch with where I’m from and from when I first picked up the bass guitar and I wanted to sound just like that. It makes us appreciate how far we’ve come that Nile still wants to be on the road with us. He’s a superstar.”