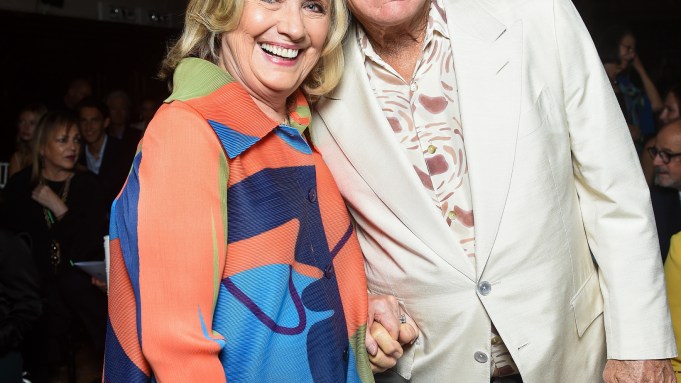 VENICE — “We all share the fact that we never want to be victims, we may lose our health, our wealth, our family but we never lose our character,” said Diane von Furstenberg before bestowing the DVF Awards on Thursday evening here, and surely the women on stage and in the stunning frescoed salon of the Scuola Grande San Giovanni Evangelista were the embodiment of resilience and drive.

“We don’t have power, we are power,” said Ava DuVernay, who received the Inspiration DVF Award from the hands of Dame Donna Langley, chairwoman of Universal Pictures. The “Selma” director is currently writing, directing and producing the film adaptation of Pulitzer Prize winner Isabel Wilkerson’s bestseller “Caste: The Origins of Our Discontents.”

Von Furstenberg recalled how it was her son Alexander who first suggested creating the awards more than a decade ago — joking that she wondered if they could ever become as popular as the Nobel Prize. “I did not invent dynamite like Alfred Nobel, but I invented a little dress that makes women feel like dynamite,” she said to a round of laughter and cheers.

Former secretary of state, first lady and presidential candidate Hillary Rodham Clinton was in high spirits, posing for photos and chatting with the honorees. The evening before she had walked the red carpet at the premiere of director Noah Baumbach’s film “White Noise” as the DVF Awards coincided with the Venice Film Festival, which runs until Sept. 10.

“I had such a good time and it was exciting to see the film festival back in full force after COVID[-19], and I thought the turnout, not just the people associated with the movies, but the press and the fans, everything was so exciting,” Rodham Clinton told WWD on the sidelines of the awards.

When told that she was very popular on the red carpet, with many women shouting out their appreciation for her work, she admitted it was “very gratifying,” but she added that “there is still so much work to be done.”

This was the first time she attended the movie event in Venice, but she underscored her passion for films, noting that she will be in Toronto for the International Film Festival on Sept. 9 with her daughter Chelsea to promote “In Her Hands,” which she co-produced through their HiddenLight Productions company.

“It is the really incredible story of a young Afghan woman who served as the mayor of her town, and we started shooting it before the Taliban came back but they were always after her and then of course we have the evacuation and even some footage after that,” Clinton explained. “Netflix bought it, it’s an incredible story.” Also on Sept. 9, she said, the eight-part documentary “Gutsy” will premiere on Apple TV+, which follows the mother and daughter team as they speak with women artists and activists who inspire them, from Gloria Steinem and Dr. Jane Goodall to Goldie Hawn and Megan Thee Stallion, among others.

Asked about staying in Venice, Rodham Clinton said she was “getting more familiar” with the city. “I was here in 2019 last time and I went to the Biennale that year with some good friends, we walked and boated everywhere and I love this city. I will be back many times in the future, I hope, and maybe if we are really lucky we’ll have a film in the film festival here,” she said, smiling.

She attended the awards on behalf of Vital Voices Global Partnership, which she founded in 1997, whose mission is to invest, connect and amplify women leaders taking on the world’s greatest challenges. Von Furstenberg described these as all “bada– women.”

Taliban restrictions on women’s education, employment and freedom in Afghanistan, following the U.S. withdrawal from the country, took center stage during the ceremony, as did the Russian invasion of Ukraine and climate change.

The International DVF Award was bestowed to 10 women from Afghanistan and Shabnam Hassan Khan received it on their behalf, underscoring the pain of being a refugee while continuing to love her country as she and the other honorees commit to using their voice for empowerment.

Ukrainian educator, reformer and entrepreneur Zoya Lytvyn received the International DVF Award and recalled her escape from Kiev as her house was bombed. In a moving speech she underscored how “education is the only reliable” value that will stay with you no matter the circumstances. The $100,000 award will be channeled into 15 scholarships for children that have been affected by the war.

Several members of the extended von Furstenberg family were in attendance, in addition to the designer’s husband Barry Diller and the couple’s longtime friend Annette de la Renta.

“My aunt is an extraordinary woman, she has always been there in difficult moments,” said Lapo Elkann of von Furstenberg. “She is probably one of the most important women in my life, she is like a second mom. I have a respect and a love for her that is unique.” He was flanked by his wife and rally champ Joana Lemos, with whom he now lives in Portugal.

Christian Louboutin also made sure he would be present. “I am here to support [von Furstenberg], this is her second award event outside America, and sadly I did not make it in Paris, so I could not not be here for her. I am very excited and I am loving Venice,” he enthused.

While the issues at hand were weighty, the general mood was one of hope, and there was a sense of familiarity among the women, and several light-hearted moments. Case in point: before the ceremony, when DuVernay noted von Furstenberg’s balance on sky-high red stiletto sandals, the designer laughed and said it was even more surprising since she hadn’t worn shoes for six weeks as she sailed the Mediterranean.

The yearly DVF Awards were created in 2010 by the designer and The Diller-von Furstenberg Family Foundation to recognize and support extraordinary women who are dedicated to transforming and inspiring the lives of other women.

This year the Lifetime DVF Award was given to Christine Lagarde, president of the European Central Bank since 2019, who spoke through a video recording.

The International DVF Award was granted to Hindou Oumarou Ibrahim, a member of the Mbororo pastoralist people in Chad and founder and president of the Association for Indigenous Women and Peoples of Chad (AFPAT), focused on promoting the rights of girls and women in the Mbororo community.

Comparing Venice to a legendary and eternal woman, von Furstenberg said “it makes all the sense in the world” to stage the awards in the city, after New York, Washington, D.C., and Paris. “It’s going to be hard to do it anywhere else,” she concluded.