"I have to take muscle relaxants to do this," lamented Annie Lennox after fumbling a few keys on the grand piano during a performance of "I Only Want to Be... 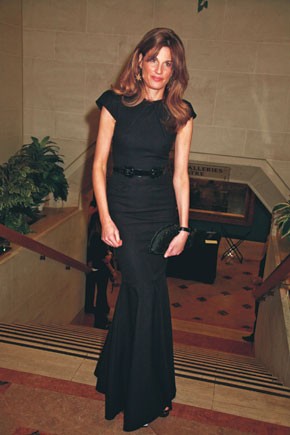 “I have to take muscle relaxants to do this,” lamented Annie Lennox after fumbling a few keys on the grand piano during a performance of “I Only Want to Be With You” Thursday night. Lennox quickly recovered and won a huge round of applause from an adoring audience at Quintessentially’s The Feast of Albion at London’s medieval Guildhall. The crowd of 400-strong, including Mick Jagger and L’Wren Scott, Sophie Dahl and Jamie Cullum, Jemima Khan, Richard E. Grant, Colin Firth, Jasper Conran, Zac and Sheherazade Goldsmith and Tom and Sara Parker Bowles, raised money for The Soil Association, which promotes sustainable, organic food and farming.

“It’s a down-to-earth affair tonight,” said the very earnest celebrity chef Hugh Fearnley-Whittingstall, whose menu included herring from the Thames, line-caught pollack that he smoked himself and vegetables carted in from the countryside on tricycles, rather than trucks.

“Do you think if I ordered nettle soup and Thames herrings the next time I’m in New York, that Quintessentially could get them for me?” deadpanned William Devine of Bedat & Co., which co-sponsored the evening.

A few nights later, Kevin Spacey ambled down memory lane before a Grand Classics screening of “The Apartment” in aid of the Old Vic Theatre Trust in London. “When I was 13 years old, I got to act with Jack Lemmon,” Spacey recalled. “He put his hand on my shoulder and said, ‘That was terrific! Who the hell are you? You should go into the profession.'”

Now, of course, Spacey is getting critical acclaim for his performance opposite Jeff Goldblum in “Speed-the-Plow” at the Old Vic.

Halfway across the globe, San Francisco socials turned out for the fifth annual Mid-Winter Gala for the Junior Committee of the Fine Arts Museums of San Francisco, co-sponsored by Oscar de la Renta. In addition to Lucy Buchanan, Laura Cunningham, Kimberly Bini, Shannon Bavarro and Sloan Barnett were Katie Traina, who flew in from Los Angeles for the event, and Eliza and Alex Bolen, who arrived from New York.

Vanessa Getty pulled an Angelina Jolie by revealing her baby news via wardrobe choice: a formfitting cream silk jersey dress she designed herself. “It’s a girl,” whooped Getty, who already has two high-energy boys. Accompanied by her limelight-avoiding husband, Billy Getty, she swept into the Legion of Honor gallery for the sold-out gala, which she chaired with Trevor Traina. “I was a bit nervous about my gown fitting,” admitted Vanessa, who said the design was inspired by a glittering vintage necklace she used for the shoulder strap. “My dressmaker delivered it at 4 p.m., and we hadn’t had a fitting for a week.”