With today’s opening of the exhibition “Ecritures Silencieuses” (“Silent Writings”), Louis Vuitton is penning a new chapter or two. 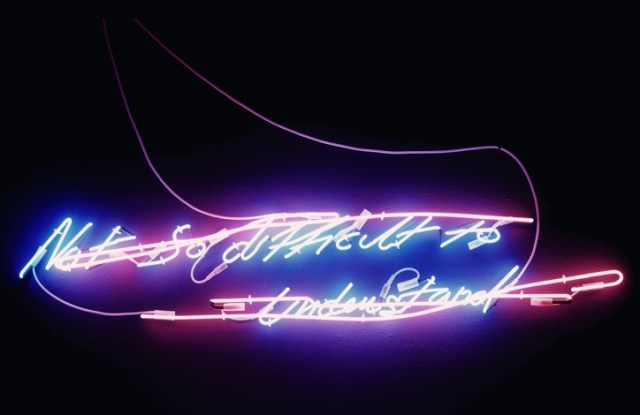 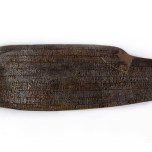 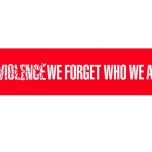 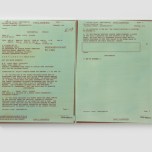 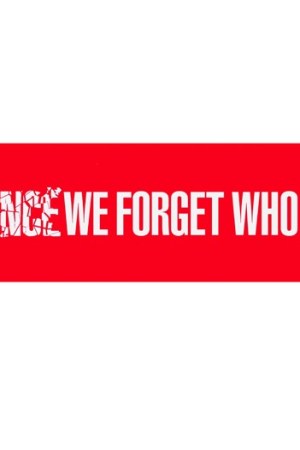 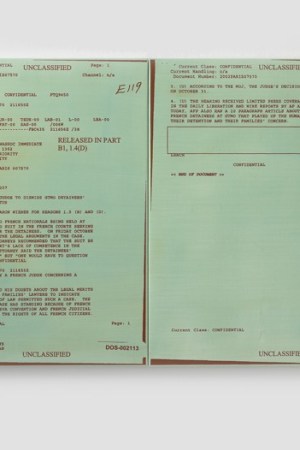 PARIS — With today’s opening of the exhibition “Ecritures Silencieuses” (“Silent Writings”), Louis Vuitton is penning a new chapter or two in its own history with art and travel.

At the show’s crux are three inscribed Rongo Rongo tablets from the Polynesian volcanic island of Rapa Nui, more commonly known as Easter Island. The sole relics of a history and tradition now lost, replicas of the tablets are making their first appearance outside the Vatican, which became their custodian in 1925.

Using these as-yet-undeciphered glyphs as a point of departure, the show, which runs through Aug. 23, explores the theme of language and the power of image through the work of 15 artists, including Jenny Holzer, Tracey Emin, Giuseppe Penone, Barbara Kruger, Claude Closky, Idris Khan and Ni Haifeng. Most pieces were selected or adapted from existing works, but a handful — such as sculptures by Penone and Khan, “evolving” works of graffiti by artists such as Sun7 and André, and a video installation in the rotunda by Kruger — are original to this event.

“It’s our most ambitious project to date,” noted exhibition curator and LVMH Moët Hennessy Louis Vuitton art consultant Hervé Mikaeloff. “Usually we present up-and-coming artists. For this show we contacted outstanding established ones, which makes for a truly exceptional gathering.”

Mikaeloff’s own impromptu visit to Easter Island, on a friend’s recommendation, was decisive in shaping the project. There, he met with artist Marco Nereo Rotelli, whose large-scale mosaic is presented in the windows of Vuitton’s flagship on the Rue Bassano. Extensive research into the tablets was followed by six months of negotiations with the Vatican just to glimpse pictures of the replicas.

Created between the 17th and 19th centuries, the tablets are thought to blend writings from Tahiti and Chile, but the deportation of half Easter Island’s population to Peru as slaves, in the mid-1800s, erased all traces of the language and its heritage.

For the artists displayed here, the notion provided rich terrain, from a colorful treatment of declassified government documents concerning Guantanamo detainees by Holzer, to a neon sign with a barred-out “not so difficult to understand” by Emin or a wall of books by Haifeng with a video projection of a hand writing, and in so doing erasing, its own script. For Khan, whose repertoire has involved mostly photography and film, it was a chance to explore sculpture through sandblasting, on a four-ton metal cube bearing the score for “Quartet for the End of Time” by Olivier Messiaen. Not incidentally, the composer wrote the score on a cell wall while imprisoned in a camp during the Second World War.

“Sandblasting is very violent, but what you’re left with is very delicate,” the 30-year-old Khan observed.

Elsewhere, the link with Vuitton is more explicit. Known since the Seventies for his work with prints, Penone created a large-scale piece from six cowhides selected at the Vuitton atelier in Asnières, which he imprinted using tree trunks and anchored horizontally with a split tree branch in bronze — a visual echo of the raw materials used by the luxury house.

Art is not the lone connection between Vuitton and the world’s most isolated island: There is also travel. But since distance, not to mention a lack of infrastructure, prevents much of the world from visiting Easter Island, LVMH, as an initial sponsor and fund-raiser for the creation of the Rapa Nui Foundation under the aegis of UNESCO, is bringing the island’s most famous emblem to the world. For one week in spring 2010, Parisians and tourists will be able to stroll through the Tuileries and admire a Moai head, which will be erected near the Carrousel du Louvre.