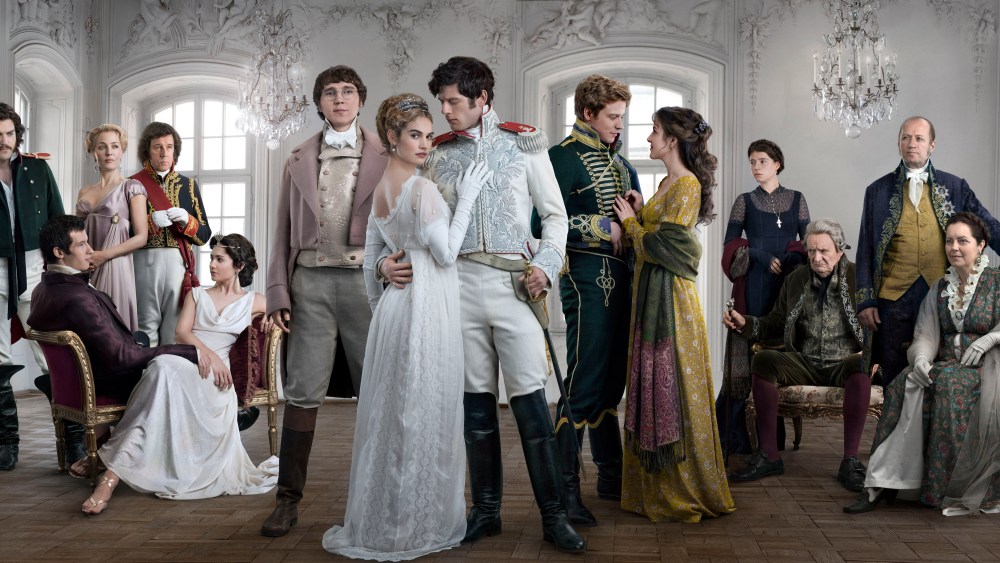 Costume designer Edward Gibbon said he tried to capture the “essence and feelings” of Leo Tolstoy’s “War and Peace” when creating the wardrobe for the BBC TV drama, which is airing in the U.S.

Like the book, Andrew Davies’ adaptation of Tolstoy’s masterpiece unfurls in Russia during Napoleon’s 1812 invasion and focuses on five aristocratic families and all the drama that the Napoleonic Wars drum into their lives.

The cast includes Paul Dano, Lily James, James Norton and Gillian Anderson and the four-part mini-series is airing on the A&E, History and Lifetime channels in the U.S. In Britain, it ran earlier this year as a six-part series on the BBC.

Gibbon, whose credits include “The Honourable Woman” and “Secret Diary of a Call Girl,” has also worked with the Almeida Theatre and the Glyndebourne Opera. Here, he talks about conjuring the mood of early 19th-century Russia on the small screen.

WWD: What was the inspiration behind the costumes?

Edward Gibbon: The inspiration is always from the script. Then it’s trying to design around the characters that are written so brilliantly by Andrew Davis and Tolstoy. Then we researched the period. We looked at what was happening. We were trying to capture the essence and the feelings of the book. It’s not a documentary, it’s not a historical re-enactment, it’s a piece of fiction.

WWD: Where did you source the majority of the production’s wardrobe?

WWD: What was the process of dressing the cast?

E.G.: I think always for me it’s trying to create a different look for all of them, and just trying to establish the characters as well. So I think some are slightly more obvious, very fashion-forward, Helene — and the outrageousness of her — contrasted with the innocence of Natasha and the sort of journey that she goes on.

Obviously, with Pierre and his socially awkward way that he presents himself, he’s not bothered, so there is a certain slap-dashness to his clothes. There are a lot of characters. I think with Paul, it is the fact that his character isn’t interested in clothes really. He’s got bigger things on his mind. He’s kind of socially inept at the beginning, he doesn’t really fit in and he doesn’t know who he is. So again, all of them go on a journey throughout the story and I think his journey is one of this social awkwardness and then when he gets in with Helene she kind of puts her stamp on him, but he’s never very comfortable in his clothes and then only by the end does he sort of achieve some sort of naturalness in his look.

And I think for Lily, who plays Natasha, it’s the journey of growing up. There’s this moment in the sun when she just realizes she’s beautiful and she’s being admired. Then there is a realization of the reality of life and then she becomes slightly less obsessed with how she looks.

WWD: Was there a costume or look in particular that stood out?

E.G.: I think probably Prince Sanjay’s ball costume was one of the highlights for me. It’s all beautiful handmade embroidery that was done in Poland. It’s a very traditional form of metalwork embroidery. Some of the linens that we use as well, we were lucky to be able to source. There are some beautiful linens from Lithuania and Russia with some of the embroidery using very traditional techniques.

WWD: How did you become involved in costume design?

E.G.: I went a strange route. I studied graphics at college, then I trained to be a tailor. I was a tailor for a while. I worked in theater, assisting designers and then designed myself for theater. I went round that way in sort of an odd route.