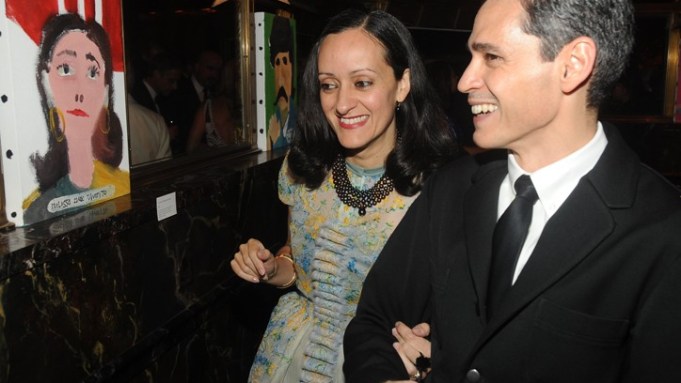 Guests at the annual El Museo del Barrio Gala Wednesday night got more than they bargained for when New York Governor Paterson made an appearance during cocktails at Cipriani 42nd Street.

“I don’t know him,” shrugged co-chair Yaz Hernandez, who nonetheless gamely presented Paterson with a sparkler bedecked birthday cake as a mariachi band serenaded him.

The governor didn’t stay long — “He just needed some votes” remarked one man — but the it was only the beginning of the night’s festivities for revelers like Angel Sanchez, Christian Cota, Simon Doonan, Bibhu Mohapatra, Brian Reyes and Liliana Dominguez.

There was a silent auction of 68 portraits of famous Latin American personalities ranging from Carolina Herrera to Mario Varga Llosa, a collaboration between co-chair Ruben Toledo and children from the El Museo Connections program.

Some of the subjects were in attendance, but Toledo didn’t seem concerned. “Most people love them, some are horrified. I just say, ‘It’s not me it’s the 10 year olds!'” he laughed.

One of the evening’s honorees, Gloria Estefan, was a no-show (she was rehearsing for a concert), but she was there in spirit: after dinner, the number-one-ranked Gloria Estefan impersonator took the stage and performed a series of the singer’s hits, much to the crowd’s delight (Estefan’s husband, Emilio, was apparently a fan).