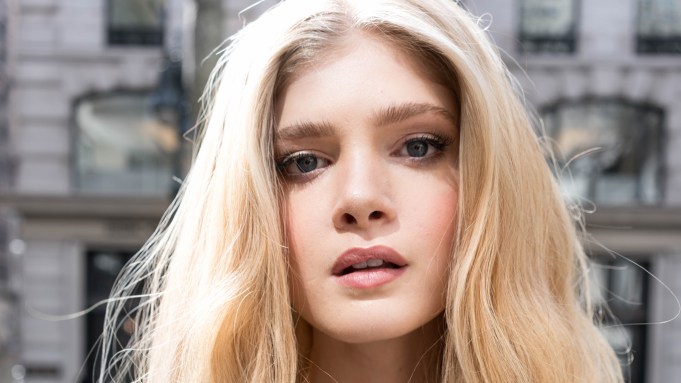 “Nobody ever believes me when I say I’m Greek,” says Elena Kampouris — and at the moment, it would be hard to believe otherwise. The 18-year-old is sporting Greek flag decals on her fingernails, and is days ahead of the March 25 premiere of “My Big Fat Greek Wedding 2,” the sequel to the much-beloved sleeper hit that cost $5 million to make and went on to become the highest-grossing romantic comedy of all time, bringing in more than $241 million. But despite her half-Greek heritage, the uberblonde Kampouris is rarely thought to be Greek. “I almost didn’t audition — I thought I had no chance at this role,” she says. “I was like, ‘My Greek family is going to be so dishonored [when I don’t get it]’ — but it somehow worked out.”

After reading Lord Byron aloud off her phone, showing photos of her “plumpy” white miniature English Bulldog, Petunia, and discussing her plans for fencing, Kampouris and her flag nails sit down to talk. Her excitement for the film is immediately evident. “If it had been out when I popped out of the womb I would’ve seen it then,” she says of the first “Greek Wedding” film. “I see my Kampouris family in the Portokalos family, 100 billion percent. They were on cloud 10 – they still are on cloud 10. They all invited themselves to the premiere — I walked my pappou down the carpet.”

Her mother Ivey is a fashion illustrator who was in Tom Ford’s graduating class at Parsons, and her father Alexander, who joined her on set for her WWD shoot, owns an antique wine store in New Jersey, where she grew up. Her paternal family comes from the sparsely populated island of Kassos in the Northern part of Greece, “where lighter-eyed, lighter-skinned Greeks do exist,” she says. The island, though unpopular with tourists (“There are three beaches — and they’re not even sandy”) is a high source of pride in her family. “My great pappou found fresh water for the island when he was 93 years old,” she says. “We go back every summer usually.”

Acting won out over her other creative interests, which include poetry, photography and botany. Her first role was a bit part on “Gossip Girl.” “I was literally in it for five seconds but at the time I was like ‘Oh my gosh!’” she says. She then moved into film, starring in Jason Reitman’s “Men, Women & Children,” which was “the first time I got to sink my teeth into a really psychological role.” She played a teenage girl struggling with an eating disorder, and dropped to 98 pounds for the character.

After her initial doubts were dashed, she sunk into the “Greek Wedding” part — which imitated life again and again. “Last spring was when I got ‘Greek Wedding,’ I had a plan to go to junior prom, and I was so excited but I had to call my friends and be like, ‘I’m not going to make it’,” she says. “But actually in ‘Greek Wedding’ I got to go to prom, with Alex Wolff. I got a movie prom at least!”

But her “Greekness,” as she puts it, was continually asked about. “Some people were saying, ‘Oh she doesn’t look Greek enough’,” she says. “It’s like, ‘Hello — I’m actually very true to this role. I am half-Greek, I was 17 when we shot it, just like her.’” Still, the blonde hair was an issue. “They had to Greek me up, because I didn’t look Greek enough for them,” she says of her Greek and French-American heritage. And though the dark locks appeased the film’s producers, it didn’t win her favors with her friends and fans. “A lot of people were not down for it,” she says. “I got a lot of swipe-lefts.”

The enthusiasm from the first “Greek Wedding” film is not limited to its box office success — Kampouris was a rare new face on set. “Honey, every single one of the original cast member came back,” she says. “We had the same hair and makeup people from the first movie! We were on the same locations in Toronto, we had the same crew.”

The “traditional, set-in-their-ways family that means well ultimately but is so quirky and overbearing,” is spot-on to her real life, Kampouris says — and was the perfect background for method acting. Aside from dying her hair dark, of course, “I didn’t need to do a thing for this role,” she jokes. “It’s been 18 years of research.”