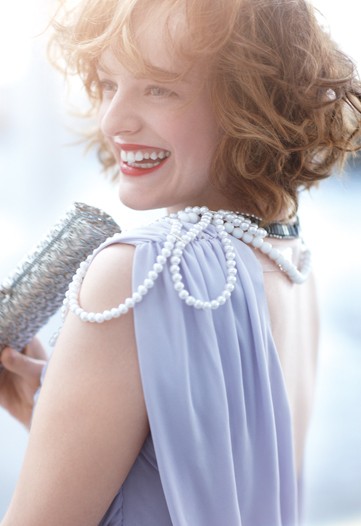 Elisabeth Moss cannot stop talking about this one pair of bejeweled gold Manolo Blahniks. “You’d think they were the only shoes I own,” says Moss, slightly embarrassed, after the third mention during an hour-long interview. “I do have other shoes!” But apparently none more meaningful to the Mad Men actress—Moss plays secretary-cum-copywriter Peggy Olson on the AMC series—who wore the heels in question for her October wedding to Saturday Night Live star (and Barack Obama impersonator) Fred Armisen. “They’re so comfortable,” she says emphatically. “I mean, I wore those shoes for 12 hours and I was fine.”

Her other “prized possession”? A pair of black-and-gold sequined Dolce & Gabbana pumps that she wore to the Mad Men season three premiere last summer. “They’re so beautiful,” Moss contends, “I want to hang them on my Christmas tree.”

Moss knows what she likes and what looks good when it comes to her style (“I like to look like as much of a fairy princess as I can,” the actress jokes). However, all that girliness—replete with dewy skin and shiny hair—disappears on television, where she has spent the last several years wowing critics and audiences alike as a frumpy-but-winning underling at a high-octane advertising agency. Indeed, Moss’ Peggy is an island of bad hair, unbecoming clothes and sketchy predicaments (see season one’s unplanned pregnancy, or season three’s sleeping-with-a-rival-agency’s-executive plotline) in the ultrastylish sea that is Matthew Weiner’s cultish show about Madison Avenue’s Sixties advertising heyday.

And for the most part, that’s fine by Moss. Not that she doesn’t sometimes wish Peggy had better taste. “It’s a little hard, being such a girly girl, when I see what Christina [Hendricks, who plays the agency’s curvy office manager, Joan Holloway] and January [Jones, as housewife/babe Betty Draper] get to wear,” she says, “but at the same time, I love my character so much that if they put me in a paper bag and I got to play her, I would be fine with that.”

Born and raised in Los Angeles, Moss has been acting since the age of six and working in series television more or less consistently since 1999, when she started appearing as presidential daughter Zoey Bartlett on The West Wing. Her extensive experience, including playing disfigured psychiatric patient Polly “Torch” Clark in the 1999 film Girl, Interrupted, has served her well. Over Mad Men’s three seasons, she has molded the character of Peggy into a quietly enrapturing female force, equal parts naïveté, smarts and determination—on a show ostensibly about men.

Not limited to the small screen, in 2008, Moss revealed substantial theatrical chops, going tête-à-tête with Jeremy Piven and Raúl Esparza in the revival of David Mamet’s
Speed-the-Plow on Broadway. As for her fishy castmate Piven, who left midrun claiming sushi-derived mercury poisoning, Moss refuses to see anything but the bright side of his departure. “You definitely want to work with people that want to be there.…And I got to work with [Piven’s three replacements] Norbert [Leo Butz], Jordan [Lage] and William H. Macy—like, when am I going to get to do a Mamet play on Broadway with William H. Macy?”

The past several awards seasons have also been good to Moss and her growing profile. This year, she won both Golden Globe and SAG awards in the television drama ensemble categories with her Mad Men co-stars. (The series is an award magnet, winning three consecutive Globes, two SAG awards and two Emmys since making its debut in 2007.) And last year, Moss was singled out. She was nominated for a SAG award, as well as a lead-actress Emmy, which pit her against the likes of Holly Hunter, Sally Field and Glenn Close, who took home the statue. “For me, to be recognized with the women I was with, who all have these huge careers, for me to be with them, I was like, Good, I’m done. I’m fine,” she says.

But her ambition has clearly not diminished in the least. Take her next project, the Judd Apatow–produced Get Him to the Greek, out June 11, which marks her first foray into bro-tastic comedy. Loosely based on Russell Brand’s outrageous character from Forgetting Sarah Marshall, the film focuses on a record label gopher (Jonah Hill) and his attempt to deliver an unruly rock star (Brand’s Aldous Snow) to Los Angeles’ Greek Theater for a gig. Moss plays Hill’s medical-resident girlfriend, Daphne. And if Apatowian women have been historically maligned—recall Knocked Up star Katherine Heigl’s reported complaints of the film’s shrewlike, humorless women—Moss sought to create the kind of relatable, strong female voice she did with Peggy. “It was very important to me to make sure that [Daphne] had a real place in the film and wasn’t just the girlfriend,” she says, “because I’m not interested in playing that. To me, that’s boring.”

Luckily, Moss had a compatriot in the movie’s director, Nicholas Stoller. “Elisabeth has a very strong screen presence and she’s just, in reality, a strong woman,” he says, adding that he had no reservations about casting Moss in his improv-heavy, balls-to-the-wall comedy. “I loved her from Mad Men and from The West Wing,” he says. “But you don’t really know until someone comes into the audition. And she was really funny. She didn’t just keep up with [Hill], who is a crazy-funny actor, but she kept him on his game.”

Moss is on top of her own game, too, but she still manages to achieve the elusive work/life balance—all thanks, she says, to her husband. Being with Armisen, “allows me to remain really grounded about my work,” she explains, “and to not get too caught up in award shows and movies and things like that. It allows me to be really happy without all that stuff. No matter what happens, I will have a home base of happiness.” With regard to having children, Moss says she’s definitely warming to the idea, but not right now. (Despite numerous Internet rumors, Moss’ publicist denies the actress is already expecting.) “You get older and you do feel like something starts to kick in a little bit, as a woman,” she says. “And then when you meet the love of your life, of course you want to have a family.” At the moment, though, “we just want to be newlyweds and enjoy each other.”