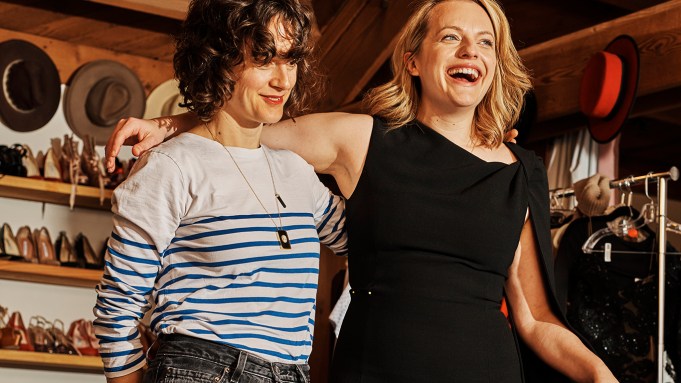 “The Handmaid’s Tale,” Margaret Atwood’s dystopian feminist manifesto, which makes its debut as a 10-episode series on Hulu on April 26, couldn’t be any more tailored for our times. Its star, Elisabeth Moss, is also the perfect foil for the message. Most audiences know Moss from her seven-year stint on “Mad Men” as Peggy Olsen, the shy secretary who came into her own during the Fifties and Sixties as modern politics and feminism were forming.

Since the show ended two years ago, Moss has been busy deepening her mark in Hollywood, in indie film and prestige cable programming, as actress and producer. Her stylist of five years, Karla Welch, has been on the journey with her as friend and image maker, and now the duo have found their dream collaboration with “The Handmaid’s Tale.”

Both women are self-proclaimed feminists, and finding looks for the 25 or so appearances Moss will make this season on behalf of the show (there will be at least another 25 more before the start of awards season) has been a labor of love.

In Welch’s loftlike Hollywood studio, which is packed with clothes and accessories for clients, Moss is running around barefoot in jeans and a white T-shirt, flipping through the clothes on her rack — about 40 or so items, tagged for her April appearances. “How cute is this?” she said of a metallic sweaterdress with a mint green collar by Jourdan. “It’ll be perfect for the Smithsonian event.”

“This is just the first round. We are fitting a month at a time so we have April down and we just got dates for May. This is normally how it is for everything, the long lead press, and then you hope there will be the longevity of it going to awards season,” added Welch.

But first things first. Moss needed to try on the caped black Rosetta Getty gown she wore on April 21 to the “Handmaid” New York premiere. That gown, strong and sexy, was emblematic of the sartorial story she and Welch are building around the project.

“The approach we want to use is socially conscious designers, and I was thinking where possible, for it to be female-driven, a little more independent or political element to it. We’re using a lot of Rosetta Getty, a lot of Prada and Miu Miu and Prabal Gurung, so it’s not limited to female designers, but we are definitely focusing on designers that have a political point of view within looking good — but we’re not going to be supersexy, it’s more strong and chic,” said Welch, whose favorite book happens to be “The Handmaid’s Tale.”

“Margaret Atwood is a Canadian icon and as a Canadian, I lost my s–t when I found out Liz was doing it. And as Liz was saying, we’re right on the money, sadly. It’s a timeless tale, but a dystopian warning.”

“I was going to ask you if I could wear Planned Parenthood and ACLU pins with my outfits,” said Moss.

“Wear them with everything,” Welch replied. “I never tend to over-accessorize and we are definitely going to wear our politics, between the theme of the book and the political landscape. If you have a voice and you want to use it, this would be the time to do. With the platform that Lizzie has and the amount of outreach and visibility, to not wear something would be a disservice. We’re saying it’s sad if people are apolitical these days.”

Moss continued, “It’s tragic. It is actually, it’s kind of, I think, immoral. I think part of the reason we are here is because people haven’t been speaking up enough so it’s a now-or-never situation. For me it’s amazing to play [Offred, her character in “Handmaid”]. The show and working with Karla has inspired my activism to take hold even more in a more public way.”

The trailers have capitalized on the topical issues. “So much of our show is about waking up,” said Moss of the tag lines. “I actually have dialogue where I say, ‘I was asleep then, and now I’m awake to the world,’ and I think as an actor, whenever you have to internalize something and then bring it back out to show people, you can’t help but have it take hold of you in some way.”

As for the clothes she’s chosen, she says, “I feel like it’s several factors — it’s what’s happening in fashion right now and when we have a fitting, the story comes out of that fitting. Last week, this French rock-‘n’-roller thing just kind of came out — sexy but also boss lady.”

Being also a producer on the show, it was important for Moss to project authority at her appearances. “You want something that is going to look respectable and intelligent, while also being sexy. It’s about fashion and now it’s about intelligent fashion and being ahead of the curve, which Karla is very good at.”

Moss is quick to point out, “Being intelligent and powerful has nothing to do with taking away your sex appeal. Embracing your femininity is a huge part of being powerful if that’s what it means to you. It all comes down to showing who you are and everyone has different ways of doing that. If you are wearing a suit and that makes you feel powerful and sexy, fantastic. If it’s wearing six-inch heels, that’s what it is.”

Turns out Moss has both — a navy Frame suit, a sheer dotted Chloe dress, a black leather Rochas circle skirt with a matching sweater emblazoned with an “R” that she says stands for “resistance.” There’s also a Prabal Gurung pencil skirt paired with a “Suffragate” t-shirt, and some Christian Louboutin, Gianvito Rossi and Giuseppe Zanotti heels.

“I would rather do 30 to 40 looks in two months than spread them out over time because you actually get to create like a body of work, like this whole story,” Moss said.

Added Welch. “There is a real classicism that’s rolling through because even the Rosetta Getty gown has kind of like starlet quality to it and so does this Jourdan dress. It has a real Forties vibe, like little odes to Hollywood.

Moss, who is based in New York, has had a busy spring. In addition to “Handmaid,” she premiered two other projects at the Tribeca Film Festival, a short called “The Tokyo Project” that was executive produced by Lena Dunham and Jenni Konner and directed by Richard Shepard, and the feature “Chuck” starring Liev Schreiber.

She’s also filming “Old Man and the Gun” with Casey Affleck and Robert Redford in Cincinnati. She says she owes a lot to “Mad Men.” “For me, that was a no-brainer. It was a fantastic part of my life experience. And it was a huge contribution to the Golden Age of television. Now there’s so much good television it’s overwhelming. I’m turning down TV stuff because I physically can’t do it but the scripts are so good it’s painful to turn down.”

While not every one of her projects has to have a political bent, she says, “that’s what’s so great about art, you can entertain and communicate and perhaps say something that you actually believe in.”

Even in “Handmaid,” there are bits that are funny or romantic. “I think it’s a very true story of humanity and it’s kind of cool, too, to have this journey with Karla right now. I’m coming out as a woman and becoming somebody that I think I’ll be for a while and I definitely found that being an actor on this show was a big turning point. And what Karla is doing, it’s kind of the perfect storm.
This is the biggest fashion story we’ve ever done.”

“Just wait till January,” Welch trills of awards season. “I’ll leave that to them,” demurs Moss. “I’m far from those thoughts. I just think about what I’m going to wear next week.”