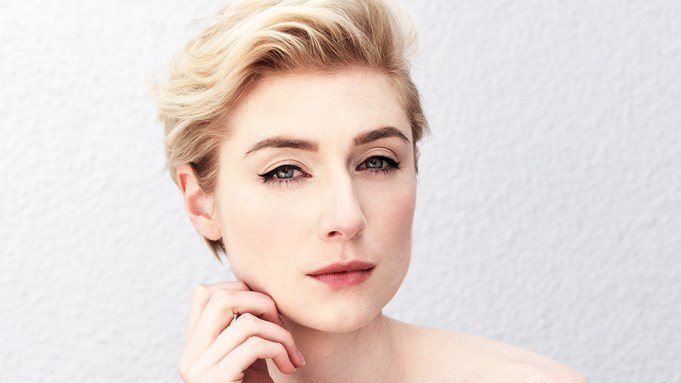 Playing “Guardians of the Galaxy Vol. 2’s” genetically perfect, golden-skinned Ayesha, the beautiful, imperious leader of the alien race the Sovereign is quite a tall order. Fortunately, the six-foot-plus Australian actress Elizabeth Debicki was up for the task.

“I remember thinking, ‘How do you do that in an audition? How do you make yourself look like that?’” chuckles Debicki, who joined the cast of the much-anticipated Marvel sequel after a string of star-making stints (“The Great Gatsby,” “The Man From U.N.C.L.E.,” “The Night Manager”). “I had a lot of faith in CGI: if it’s not looking like that, they can always fix it in post.”

In a film filled with elaborate costumes, Debicki’s throne room look is easily the most ornate and grandiose. “I loved how it looked. I’ve never seen anything like it — it’s really a piece of art,” she says of Ayesha’s golden accoutrements. “There’s something very Space Age Elizabethan/Amazonian queen that I loved, and it feels incredible to have it on. It feels really powerful.

“You can do all your homework as an actor, but it’s not really until you are completely made up and you step into the costume and on that throne that you really understand her and the scope of her,” she says. “The universe of Marvel allows for these women to be just as powerful, larger than life, interesting and badass and all the rest of it, as the men in the films, and I think that’s really important.”

Blessed with a frame most designers would die to drape, Debicki’s own style is decidedly less ostentatious; she works with Australian stylist Annabelle Harron and favors V&A and Giambattista Valli. “I’m always in pants and shirts. I have hundreds of white collared shirts,” she says.

“When I grew up, I was so obsessed with ‘Annie Hall,’” she adds. “Julianne Moore, Tilda Swinton, or even Juliette Binoche — there’s something that’s sort of slightly androgynous quality to them, and I grew up loving that style so much. It’s a combination of me being lazy and being comfortable.”

She’ll trade the action of “Guardians” for raw emotion in her next project, filmmaker Steve McQueen’s “Widows.” “I’m so ready. I’m chomping at the bit,” she says of her eagerness to dig deep and work with the “12 Years a Slave” director. “I’m always really seeking out juicy parts, and someone like Steve really writes juicy female roles.”

When it came to playing the quirkily empathic insectoid alien Mantis in “Guardians of the Galaxy, Vol. 2,” Pom Klementieff kept it simple: “I brought my own weirdness,” she says.

“It’s not like you’re doing a biopic,” Klementieff says of her take on the guileless extraterrestrial with the ability to read and channel emotions. “It happens in space, and you can really have fun.”

That meant following filmmaker James Gunn’s lead and bypassing the character’s sporadic, often convoluted 44-year comic book history. “In the comic books, Mantis is really different,” she says. “I asked James, ‘Should I read everything?’ I wanted to read everything. He said, ‘No, it’s different.’ She discovers everything for the first time. She’s pure and innocent — she’s kind of like a child. She’s wide-eyed.”

Literally wide-eyed: contact lenses to create Mantis’ bug-eyed pupil effect required constant removal, replacement and eye-dropping. “And I have antennas on my forehead. The makeup artists are so good that I forget about it. People are like, ‘Oh, you have stuff on your forehead.’ I’m like, ‘What? Oh yeah, of course.’”

The final effect required no prosthetics, just Klementieff’s inspiration. “I thought of the praying mantis, of course,” she laughs. “The way I hold my hands, like Mr. Burns in ‘The Simpsons’ — like I’m plotting something.”

The Canadian-born actress has built a burgeoning film career with standout turns in “Oldboy” and recent Sundance darling “Ingrid Goes West,” and is enjoying sampling a wide range of designers for her public appearances, including Miu Miu, Acne, Rag & Bone and Chanel, which she wore to the “Guardians” premiere. “I love to create looks,” she says. “It’s just like you’re a different character every day.”

While she looks forward to a full-on action hero opportunity, Klementieff is pleased to add a female character to the Marvel Cinematic Universe that isn’t a butt-kicking icon like the Black Widow or Gamora, but rather “messy and kind of all over the place.”

“Those characters are really strong and badass — which I love, but it’s great to show a different version of being a woman,” she says. “To be more innocent and a little bit weird and not really self-confident. I think it’s important to show that…you can’t be perfect, and you have to embrace the fact that you’re original, and it’s what makes you interesting.”

“Of course it gets me there,” she says of the long, elaborate process, “but I wouldn’t mind shaving [off] an hour-and-a-half. If I just spent three hours doing it, I would be happy. But four to five hours is exhausting. By the time you’re ready to start a 16-hour day, you’re half-beat.”

There was also the lingering aftermath that had her still discovering splotches of green on her person up to a week after shooting. “I shouldn’t have confessed that, but this is the truth,” she laughs. “And it’s usually in places I can’t see. You’re like, ‘What the hell?’ I’ll just find them in the oddest places!”

But for the avid sci-fi fan, who’s enjoyed roles in other spacefaring franchises “Avatar” and “Star Trek,” it’s all worth it to meld grounded reality to fantastical environs. “The themes and the issues are very universal and they’re very deep, so I never wanted to be cavalier with it,” she explains.

For example, Gamora’s newly peaceful aspirations run afoul of her sister Nebula’s burning thirst for revenge over their brutal childhood competition for their evil father Thanos’ favor. “She went from being the most dangerous assassin to somebody that hates drawing her sword,” says Saldana. “I was able to imagine so much more of what she’s been trying to run away from. Then Nebula is like, this mirror that won’t let her get away from it.”

Clad in Altuzzura and simple Levi’s, Saldana’s changing up her style, gravitating toward designers like Issey Miyake, Rick Owens and Paul Arden as she anticipates a significant life shift. “I’m a year shy of turning 40. I’m not going to act as if it’s not affecting me — when you change the left digit versus the right one, it’s very impactful,” she says. “I’m embracing it in everything, because it’s forcing me to address all the issues that I’ve been born into: being a woman, how our youth defines our success and the moment we’re told that our youth is no longer there…I’m battling all these things.”

She credits husband Marco Perego, with whom she has three boys, for encouraging fresh style choices. “He goes, ‘There’s so many other adjectives that you can add into your sense of style. You’re an artist. Be an artist in everything that you do.’” The result has lately led her down a more androgynous path: “I’m channeling Tilda Swinton’s style.”

The next phase of her film career will veer away from science fiction (minus some franchise return engagements) “for at least the first half of my 40s, because I think I dedicated my late 20s and a great deal of my 30s into doing these films,” she says. “I’m forever grateful, but after a decade I think I’ve warranted a break.”

Chanel Cruise 2018: Greece Is the Word