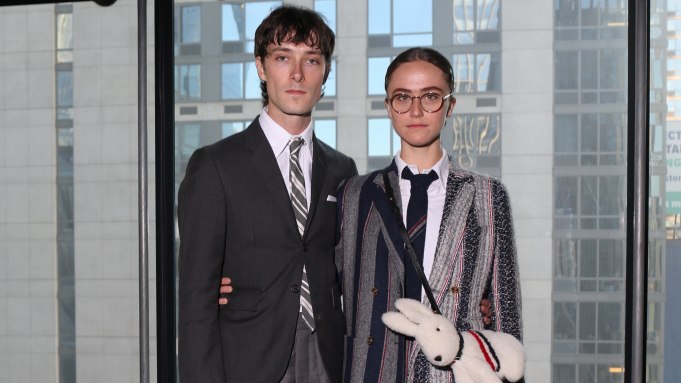 Date night, kilt edition. Thom Browne’s show at The Shed on Saturday evening functioned as a couples’ night out for Vice President Kamala Harris’ stepdaughter (and rising fashion star) Ella Emhoff, and her boyfriend, GQ editor Sam Hine. The two arrived off the elevators onto the eighth floor of The Shed and asked if they could have their picture taken, before moving down the escalator swiftly into the show venue.

Heading up to the event, the ever-ubiquitous “Gossip Girl” guys Eli Brown and Thomas Doherty compared fits with Benito Skinner and his boyfriend Terrence O’Connor ahead of the step and repeat.

“Are there drinks up there?” Brown asked a staffer, who reassured him there would be water. “Will there be alcohol? F–k.”

Upon spotting Skinner, Antoni Porowski put on a mask and went in for a bear hug. “It’s so nice to meet you,” he told the content creator. With all the time we’ve spent on our phones the past 18 months, it’s no surprise how Instagram celebs like Skinner — @Bennydrama7, that is — have become such a hot commodity at fashion events. Maisie Williams, herself a mega celeb thanks to a little show called “Game of Thrones,” was just as delighted to see Skinner, making a beeline for him.

With some time to kill before the show, Brown was inquiring what the Met Ball theme was this year, while Dan Levy looked utterly at home sitting on a table, chatting with whomever came up to him. Lindsey Vonn straightened her skirt for photos as fellow athlete Russell Westbrook toured around the space with photographers for the best lighting.

MJ Rodriguez was dressed in a schoolgirl-like ensemble, which she deadpanned was her “junior year uniform.”

“I’m going to school,” she said. “When I get to senior year, they’re going to put me in something even [crazier].”

Rodriguez will be attending her first Met Ball this week, followed by the Emmys the next weekend, where she is nominated for outstanding lead actress in a drama for her role in “Pose.”

“I got to go to a couple shows, it’s been a whirlwind with fashion week on top of the Met Gala,” Rodriguez said. “It’s crazy, it’s hard to take it all in, but I’m living for it. I’m smiling. All my jitters are inside right now.”