The American actress donned a breathtaking, soft-pink silk gown by the house for the Cannes Film Festival’s opening ceremony, as the youngest member of the event’s jury.

PRETTY IN PINK: With moody storm clouds gathering overhead, all eyes were on the cast of Jim Jarmusch’s zombie flick, “The Dead Don’t Die,” at the opening ceremony for the 72nd edition of the Cannes International Film Festival on Tuesday, with Chloë Sevigny, Adam Driver, Bill Murray, Tilda Swinton and Selena Gomez joining ranks to mount the steps of the Palais des Festivals.

Chaperoned by its maker, Haider Ackermann, Swinton matched the sky in a knotted gray gown embroidered with rhinestones that twinkled back at her in the lenses of Jarmusch’s Ray-Bans; Sevigny was all va-va-voom in a high-split black bustier gown by Mugler’s Casey Cadwallader, with Gomez embodying edgy glamour in a custom-made white leather and satin Louis Vuitton look by Nicolas Ghesquière, pairing a bra, slit skirt and belt.

But in the fashion stakes, all were upstaged by Elle Fanning. As the event’s youngest jury member, at age 21, the American actress looked quite the grand dame sweeping up the carpet in a breathtaking, soft-pink silk Gucci gown with cape and purple and ivory floral embroidery at the waist, giving a romantic dose of old school glamour to the event. Completing the look were dazzling diamond earrings from Chopard’s Red Carpet Collection. Mexican director Alejandro González Iñárritu — who wore a Prada suit — is heading this year’s jury, as reported. 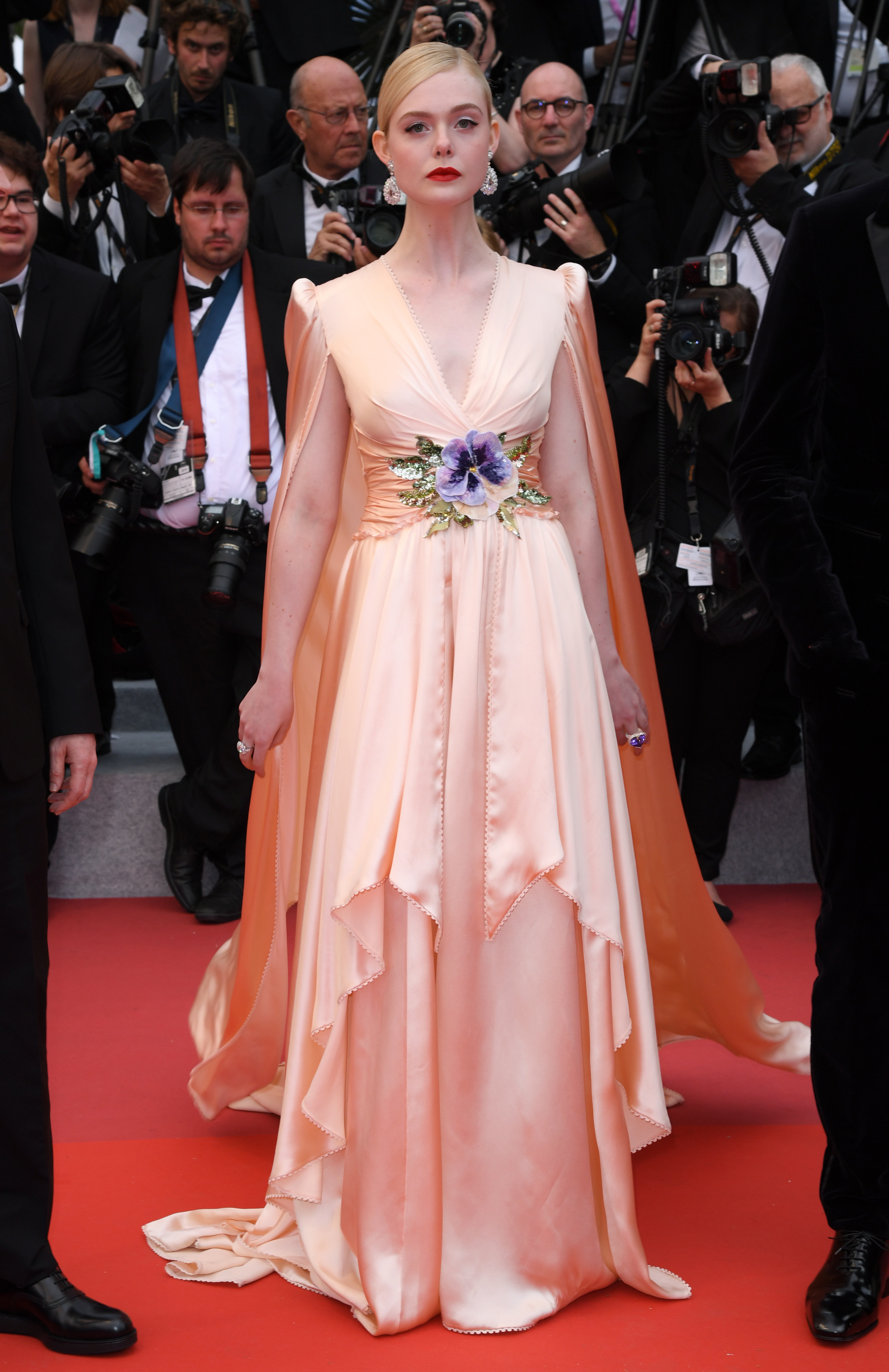 The night opened with a brief homage to the late Agnès Varda, whose children, Mathieu Demy and Rosalie Varda, were in the audience, followed by a poetic performance by Belgian artist Angèle, in a pale green dress by Jacquemus.

Among buzzy events to come, Quentin Tarantino — 25 years after presenting “Pulp Fiction” in Cannes — is back with “Once Upon a Time… in Hollywood,” starring Margot Robbie, Leonardo DiCaprio and Brad Pitt.

Also returning to the Croisette to promote “Rambo V: Last Blood,” Sylvester Stallone on May 24 will take to the stage at the Palais des Festivals to present exclusive images of the film and a video montage of his career, followed by the world premiere screening of the restoration of Ted Kotcheff’s “Rambo: First Blood.”

Also set to see their lives flash before them on screen, Elton John on May 16 is expected to attend the premiere of “Rocketman,” the biopic produced by his production company, Rocket Pictures, and Argentine soccer legend Diego Maradona will be in town for the screening of a feature-length documentary about his career.