The actress seems destined for stardom, or, at the very least, a permanent seat at the cool kids’ table. 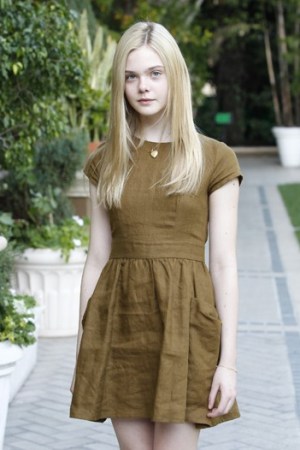 Elle Fanning seems destined for stardom, or, at the very least, a permanent seat at the cool kids’ table. After early turns playing younger versions of big sister Dakota in “I am Sam” and the TV series “Taken,” she’s expanded her résumé with roles in Alejandro González Iñárritu’s “Babel” and David Fincher’s “The Curious Case of Benjamin Button.” She’s currently garnering considerable buzz for her work in Sofia Coppola’s much anticipated “Somewhere,” which premiered in Los Angeles last week. It’s safe to say Fanning has entered the girl-meets-young-lady stage of her budding career.

“I was just talking with Sofia the other day, and she was like, ‘You look so much older now,’ ” said Fanning, who has sprouted seven inches to 5 feet 6 inches in the last two years. She even grew two shoe sizes during the “Somewhere” shoot in summer 2009. She’s now an 8.

It’s hard to say how much Fanning will have risen, literally and figuratively, by the time her next batch of films is released. She just finished J.J. Abrams’ under-wraps action film “Super 8” and Francis Ford Coppola’s equally well-guarded supernatural drama “Twixt Now and Sunrise.” Fanning is said to play a ghost in the latter but remains tight-lipped. In February, she begins filming Cameron Crowe’s “We Bought a Zoo,” in which she plays a 13-year-old waitress who works at a zoo restaurant.

It’s sometimes easy to forget that Fanning is only 12 years old and in the seventh grade. Her sophisticated fashion sense only adds to her grown-up persona.

“I like mixing vintage with new,” she said of her day-to-day style. “I love anything high-waisted, like cropped pants, and I usually wear orange prescription glasses, anything that’s unexpected.”

She’s also proven at home on the red carpet, where she has worn Marc Jacobs (“It’s Sofia’s favorite, and I always love to get her opinion on what to wear”), Elie Saab, Marchesa (“That one was really fun”) and Valentino (“I love anything girly, and the Fifties are really major for me, so I loved those bows”).

Still, her high-pitched squeal, which she seems to let loose every other sentence, and the fact she’s in the midst of reading the young-adult classic “A Wrinkle in Time” serve as reminders that she is, after all, a kid. When she’s not working, Fanning goes to ballet class five days a week (she recently graduated to pointe shoes), rides her horse Goldie and cares for her other two pets, a dog and a fish. And she still looks up to her big sister, who is a senior in high school.

“We have a relationship like any little sister and big sister,” Fanning said. “I always want to do what she does. But our biggest argument is over clothes. She never wants me to wear hers.”