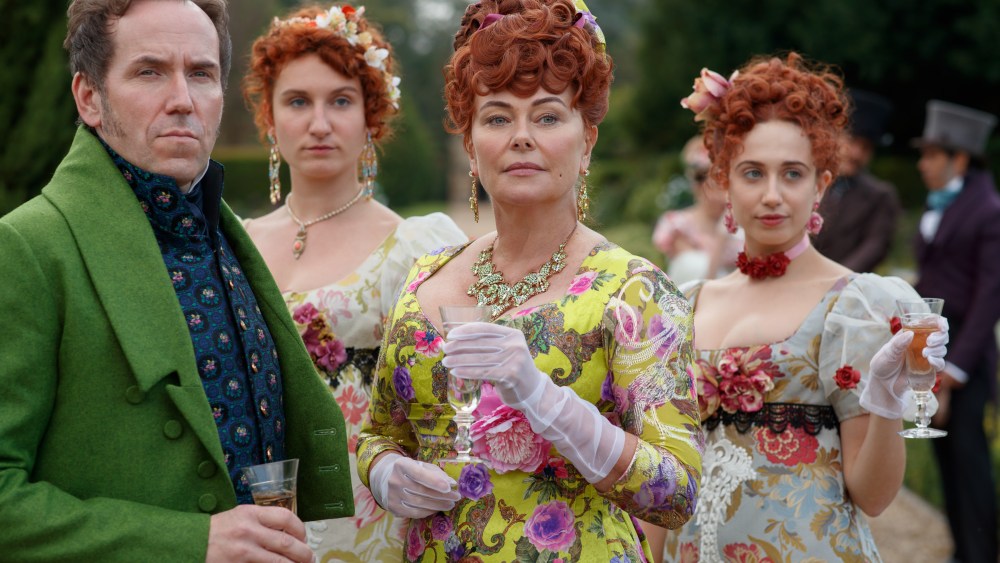 As any society swan knows, a memorable outfit is key to leaving a strong impression — and costume designer Ellen Mirojnick ensured that the characters of “Bridgerton” would stand out in the sea of excess.

Mirojnick was enlisted by production company Shondaland to craft the colorful and fantastical sartorial world of the British period drama. The series, adapted from author Julia Quinn’s historical romance novels, follows several well-heeled young women as they enter 1813 British society with the goal of finding a husband. Add in a gossip newsletter penned by the anonymous Lady Whistledown, the emergence of an emotionally distant duke, and the drama ratchets up quickly from the first episode.

The drama is matched by Mirojnick’s costumes, all created custom for the show, from the leading characters to the background players — around 6,200 costumes total in the span of around five months. The costume department, as a result, was massive — the show established its own costume house and employed a total of 238 people, including cutters, tailors, embellishers, milliners, jewelers, a corset maker, fabric buyers and costume dressers on set.

“Working with Shondaland, their aesthetic is quite aspirational,” says Mirojnick, who worked with Shonda Rhimes’ production company on the pilot episode of “How to Get Away With Murder” and “Still Star-Crossed.” “They like to tell stories in a heightened fictional style.” She was one of the first key people hired on “Bridgerton” to create the visual landscape of the show, and describes the show’s color palette as “delicious.” “It’s like a big ice cream sundae with all the toppings,” says Mirojnick. “It’s frothy and delicious, and total escapism.”

Mirojnick knew that she needed to modernize the costumes while keeping them period-believable and aspirational. She started her design process by doing a “deep dive” into the Regency era of Britain, which created a silhouette foundation for the dresses. But she also let her imagination roam to more recent decades for inspiration. “We were breaking all barriers,” she says. “There was nothing that we had to include, but we respected what it was and then broke with tradition and made it our own.”

Although colorful, Mirojnick qualifies the palette, particularly for the titular Bridgertons, as “powdery.” “The Bridgertons are old money, and they’re sophisticated and they are of a refined social status, and they are more traditional,” says Mirojnick of the family, where the central attention is on the debut of young Daphne, coined the “diamond” of the social season by Queen Charlotte.

“She is absolutely pristine and elegant and sparkly and glorious in the simplest, most glorious way,” says Mirojnick of her approach to Daphne’s costumes. “She had to be this beautiful porcelain doll in the beginning — the simplicity and elegance as if she was Grace Kelly.” As her relationship with Duke Simon (played by Regé-Jean Page) develops, so does the sophistication of her costumes; the coloration gets dustier and richer as the character matures.

“Regé was such a vibrant leading man,” says Mirojnick, who outfitted him in royal-tone velvets. “When Regé came into the room, as the costume designer, you feel immediately what he can and cannot wear. The costumes are of a period fit and a period feel, so not every modern young actor can walk in, put it on and own it,” she adds. “Regé, on the other hand, was able to do it. It suits him so perfectly.”

Counter to the refinement of the Bridgerton family — though no less delightful — is the Featheringtons. “They come from a new monied place of being a little bit too loud and a little but too citrus-y, and a little bit over embellished and a little bit overdone,” says Mirojnick of the other central family to the story, tapping into the oft-quoted philosophy of Gabrielle Chanel of looking in the mirror before leaving the house, and removing one piece of outfit.

“Well, the Featheringtons put one piece on,” Mirojnick says. “They want to be seen, they want to be part of this world that they’ve moved into.” While the book describes the Featherington outfits as ugly or tacky, Mirojnick took a different approach for the show, viewing them instead as a foil to the powdery refinement of the Bridgerton family. Their costumes are heavily embellished and layered — they’re lively.

“The process of embellishing — I have to say, that was where the fun really began,” says Mirojnick. With limited fabric stock available for the quantity of costumes they needed to create, the team turned to the answer of embellishment and layering different fabrics to create new possibilities from the amalgamation of different elements.

“We were very fortunate to live the designers dream — to be able to use color and accessories freely, and be able to try things and be bold and adventurous,” adds Mirojnick, who wrapped her next film, a live remake of “Cinderella” starring Camila Cabello slated for release next year, in October. “It’s an adventure that we all felt so lucky to go on.”

A Closer Look at the Costumes in ‘Schitt’s Creek’