The renowned composer died Monday in New York at age 103. On the occasion of his 100th birthday, Carter spoke to WWD about his work and his life. 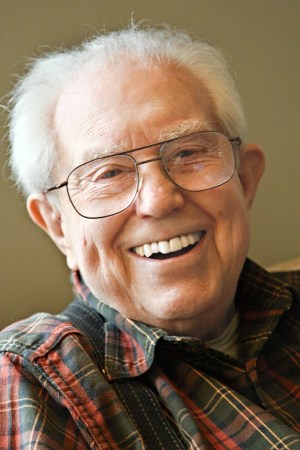 Renowned composer Elliot Carter died Monday in New York at age 103. One of America’s foremost composers, Carter continued to work up until his death. On the occasion of his 100th birthday, Carter spoke to WWD about his work and his life. Here, a look back at the interview:

“Composing is the thing I enjoy most,” says the legend, who has had a major impact on modern classical music. “There’s nothing better than waking up in the morning and figuring out what I’m going to do that day, what I hope to accomplish, what kind of music I’d like to write. Or perhaps, I will try to solve some problem in music that made itself clear to me that evening.

“I used to enjoy writing it down,” he confides, “but now, I’m getting a little tired of that, so I instead try to find things I like in my head before I write them.”

Carter completes a single composition almost every week, one of the reasons for his prodigious output throughout his career. He’s composed more than 140 works—47 in the last 10 years and nine alone in 2007.

“An old man has no memory whatsoever, so I don’t have many pieces in my head,” Carter says in his self-deprecating manner. “I get stuck with whatever piece it is I’m working on and I become a fanatic. I just want to get it down and finish it. I never stop thinking about things in the piece and what to do with them. As I’m getting older, I’m getting more impatient and want to finish pieces soon.”

Most people get birthday presents wrapped up in fancy paper, but for his centenary on December 11, Carter is being honored with concerts around the world, including one at Carnegie Hall led by James Levine of the Boston Symphony Orchestra and Daniel Barenboim, pianist and former conductor of the Chicago Symphony Orchestra.

Levine and the Boston Symphony will introduce Carter’s Interventions for Piano and Orchestra, along with a program that includes Stravinsky’s The Rite of Spring. Barenboim will perform on the piano.

“Elliott is one of the most important composers of the last 50 years—it’s a physical phenomenon that after the age of 85, he developed a new style and I don’t even dare say it is a late style because he might find another one 20 years from now,” says Barenboim. “Many years from now, people will see his music as some of most important music written of our time.”

Several years ago, Carter completed his first one-act, 47-minute opera, What’s Next?, which revolves around a car crash. He wanted to present opera in a more modern setting and based on a topic that is current. “I wanted to write about something in modern civilization that people think about a great deal, and I thought, why not an automobile accident?” Carter says. “I realized if I were to choose a literary subject that’s well known, like The Great Gatsby or Huckleberry Finn, I would have to write music that ‘goes back in time,’ but I wanted to write music that’s about right now.”

Levine says he is especially devoted to Carter’s What’s Next?, and this past summer at the Tanglewood Music Center, Levine took on the directorship of The Festival of Contemporary Music, which was dedicated to Carter’s works. “His music is always very exciting to me—from the vocal ranges to the rhythmic and harmonic intricacies to the way the characters interact with one another—it’s a kind of contrapuntal vitality you can hear through the different textures with each of the voices creating such distinct impressions,” says Levine. “It makes me wish he would continue making more operas since there’s such a degree of vital invention as he challenges opera.”

Challenging conventions has been the main theme throughout Carter’s career, beginning with his decision to study music in the first place.

His father, who was a lace importer, did everything in his power to prevent his son from pursuing a musical career. “My parents weren’t sympathetic toward me becoming a composer. In fact, they found the idea unpleasant,” he says. “They thought, very sensibly, that you can’t make much money out of it, and my father made every effort to get me off ‘the music stuff.’ So he had me move freight cars to help his business.”

His aunt was the one who opened his ears and mind to music when he was age six, and purchased a set of records for him when he was eight. Before he was 16, Carter was studying with Charles Ives, who took him to concerts. He realized he was destined to be a composer when he was 19, and first heard Stravinsky’s Rite of Spring at Carnegie Hall in 1928. “I thought it was the greatest thing I’d ever heard and thought to myself, I’d love to write something like that.” He laughs as he adds, “I remember half of the audience walked out and that’s what I liked, too.”

“It’s rather touching for me to see the halls packed today with people because there were times when I was lucky if I could fill one row at a big concert hall,” he recalls.

In 1932, he left to study in Paris, after completing his studies at Harvard, where he received a degree in English, and a master’s degree in music. Carter honed his technique in Paris, studying with Nadia Boulanger for three years. He was never a devotee of the classical masters, however. “I thought Beethoven and Brahms were boring, and it was only after I studied with Nadia, who had me listen to the whole repertoire of music, that I realized I had different tastes,” says Carter, sitting on the sofa in his Union Square apartment in New York, the only surface not covered in sheet music.

And even though he’s met such music giants as Stravinsky, Ives and Aaron Copland, and in a moment he terms a highlight, actually sat next to George Gershwin during a performance, Mozart is a personal favorite. “Mozart developed the idea of dramatic change in musical composition—a way that music had never been experienced before. I like things that change suddenly, and go off in a new direction. I like something that seems out of the frame, yet still fits into the frame,” he says, describing variations on a theme.

Carter didn’t receive recognition as a composer until midway through his career. He never imagined during the years he struggled that he would one day meet his inspiration— Stravinsky. “He was always a very enthusiastic, lively man, and liked my music a lot, which was very flattering.

“I can say it’s only in my maturity that I began being recognized. I was in my 40s already,” adds Carter.

As his reputation spread, Carter turned to literature, poetry and even films for inspiration, and was heavily influenced by the works of Russian film director Sergei Eisenstein. “I found it very interesting the way he cut his films—the way he featured different shots from the same scenes, but from different angles of the camera,” says Carter.

Reflecting on his present success, he laughs. “I don’t know whether I’ve made it even now,” he says. “What I am certain about is that I’m going to be 100 this year. I cannot but help feel that I’m getting a lot of performances because of my age.” He smiles. “If I had these kind of performances at a time when I was not strikingly old—I would have felt I had made it.”