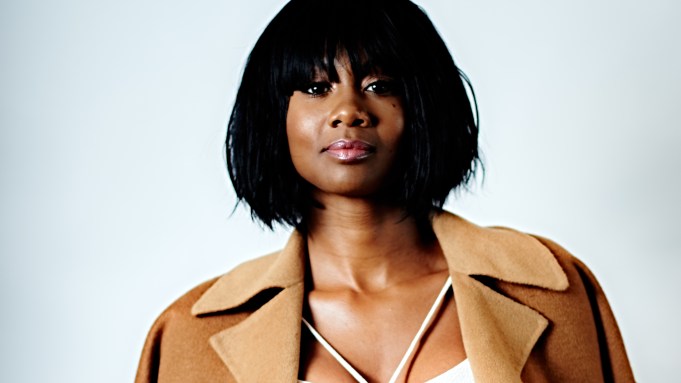 It’s only 10:15 a.m. and Emayatzy Corinealdi is in full makeup, hair and heels. It’s a recent Wednesday and the actress is at West Hollywood’s The London Hotel to promote the highly anticipated Miles Davis biopic “Miles Ahead,” written and directed by its star Don Cheadle.

“This project means so much to him. I just really wanted to do the best that I could,” says Corinealdi, who plays Davis’ first wife Frances Taylor Davis. She won the role via a sent-in audition tape and didn’t even meet Cheadle until filming began in Cincinnati. “He was in character as Miles. It was really intense.”

“Miles Ahead” hits theaters in New York and Los Angeles on Friday with a wide release on April 22. Meanwhile, Corinealdi has a busy couple of months ahead. Next week, she’ll resume filming season two of the Amazon drama “Hand of God” opposite Ron Perlman (she plays a high-priced escort and confidante to Perlman’s vigilante judge) while her indie thriller “The Invitation” with Logan Marshall-Green hits theaters on April 8.

She’ll also appear in The History Channel’s “Roots” reboot, which aims to reintroduce the landmark 1977 miniseries, this time to the Millennial generation. “It’s an honor to do something that’s…made such an indelible mark on culture and society. It’s so much bigger than me,” she says of the four-night, eight-hour series, debuting on May 30. “It’s exciting to have all of these things out at the same time because they’re so different,” she says.

A military brat (her mother is Panamanian and her father is Italian), Corinealdi left her native Fort Knox, Ky., when she was three months old and bounced across the country, even living in Germany. After dabbling with summer theater in high school, the once-aspiring attorney decided on acting. “It was something I always enjoyed doing, but I didn’t think of it as a career choice,” she says, adding that she hasn’t looked back since moving to Los Angeles in the early Aughts. (She also found happiness in a quintessentially L.A. moment: she met her husband in a Macy’s parking lot at a mall in the San Fernando Valley.)

Corinealdi got her big break when she was cast as the lead in writer/director Ava DuVernay’s 2012’s indie drama “Middle of Nowhere” opposite David Oyelowo. She earned a Film Independent Spirit Award nomination for her role as Ruby, a young newlywed awaiting her husband’s release from prison. “We often called that our ‘Thelma & Louise’ moment because we grew so close to each other during that,” she says, noting the trio have discussed working together again in the near future.

Meanwhile, the actress acknowledges it hasn’t always been easy. “I came up in a family that believed in hard work,” she says. “I realized early on that that doesn’t necessarily apply to this business. At the same time, I’ve done the work. I’m committed to this. I also think it’s important to be involved in creating things, to have that part of your psyche exercised.” She hopes to eventually get behind the camera. “Writing and directing is something I’d love to do. I don’t know about [doing it] to the magnitude of which Don has done, wearing all hats at once. He’s been in the game for a while, so I’m going to need some more time.”