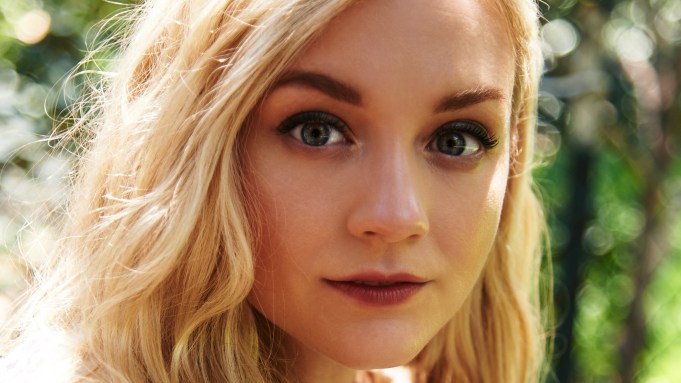 “There’re definitely people who have been, like, ‘I found your music because of Pandora or Spotify, then I realized you were the girl from ‘Walking Dead’ and ‘Masters of Sex,’” says Emily Kinney, over coffee in Manhattan’s East Village.

If such a resume seems busy, it’s simply more of the same for Kinney, who has been balancing — and finding success in — acting and folk music her whole career. Next month, Kinney serves up a double dose, with a role on ABC’s latest drama “Conviction,” and a new record.

Kinney, 31, credits her music education to her parents, who played artists like The Carpenters, “and [I’d] sit in front of the record player,” she says. TV, perhaps forebodingly, was another source of early inspiration. “I remember watching ‘Growing Pains’ and ‘Kids Incorporated’ and being like, ‘Oh, that’s what I want to do.’”

She left Nebraska for New York at age 19 through an exchange program through New York University and fell into the routine of many young actors looking to make it in the city: A day job in a coffee shop balanced with lots of open calls and TV auditions and singing backup for musicians she met. “I slowly got agents to find me more auditions and it was all about auditioning and that seemed to make sense to me,” she says. “Music is different because you are the creator of it.”

She’s pursued both, on Broadway in “Spring Awakening” and “August: Osage County,” on “Masters of Sex” and “The Walking Dead” and in a series of EPs and one full-length album, in 2015.

“I realized that I was really keying into what I was good at. It wasn’t necessarily just the music but stories and the words and connecting with an audience,” she says. “And that’s something you can do with music, but also with movies and TV and it started to become less important to me which avenue.”

The most recent results of her pursuit of both will first result in ABC’s latest nighttime soap “Conviction,” a legal drama poised to be the network’s next “Grey’s Anatomy” or “Scandal,” premiering on Oct. 3.

“I was looking at tons of pilots everyday,” she says, “and then this one I really liked for two reasons: the creators and the writers [are] Liz Friedlander and Liz Friedman, who did ‘Jessica Jones’ on Netflix; and then I really liked her character. When I read it, she reminded me of my little sister who’s in law school and wants to work at a DA’s office, and the show is lawyers basically trying to get people who have been wrongly imprisoned out of prison.”

She’s also set to release a seven-inch record on Oct. 28, of pop-meets-folk-Americana — a long way from those first open mics as an NYU student. “It used to be when I first moved to the city, I never knew how long I’d stay, but it was my rule that I had to go [see live music] at least once a week,” she says. “All of my friends were in music, so I used to go to Rockwood all the time. Now I still try to make a point to go to see music every week.”

She’ll no doubt be balancing shows with her day gig as a polished paralegal, which is in contrast to her years on “The Walking Dead.”

“With ‘The Walking Dead’ we were on the road, so we were wearing the same clothes for six days at a time, dirty too,” she says. “It’s just a nice change. It’s different. Sometimes I don’t feel like I’m acting because I’m too clean and comfortable — I feel like I should be hot and sweaty and dizzy.”