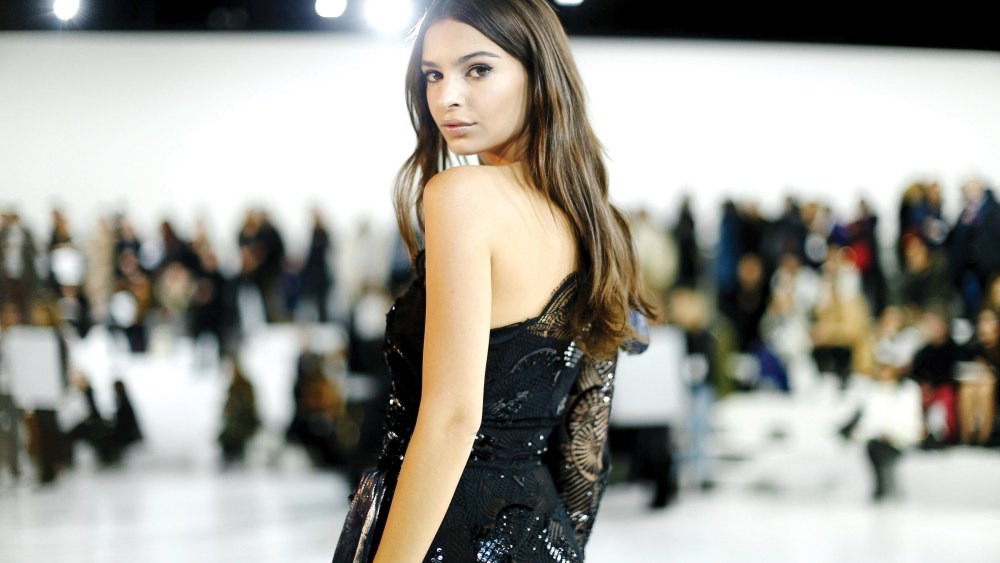 “Oh yeah, that’s my jam right there,” a red-blooded male says, staring at a glowing iPhone screen for a little too long, all too happy to play “research assistant” to this WWD reporter. “What’s her name again?” he asks, his pupils still jumping off his face. “Emily Rata-what?”

Emily Ratajkowski, it would seem, had just won over yet another Instagram follower. And that is precisely the reaction the 24-year-old model-actress-pinup-social media fixation and now, crusader, claims she isn’t after. It’s all, ostensibly, for a cause (more on that later).

Ratajkowski’s celebrity was overnight. She was thrust into the spotlight in 2013 after an appearance in Robin Thicke’s “Blurred Lines” music video, in which she bounced around in nothing but white sneakers, a nude thong and red lipstick. She earned her notoriety as “the ‘Blurred Lines’ girl,” a label she has yet to completely shake. She was then cast in David Fincher’s “Gone Girl” as Andie Fitzgerald, the college student paramour to Ben Affleck’s character. Soon after Ratajkowski — along with half of Hollywood — played herself in a cameo for the “Entourage” movie and later starred opposite Zac Efron in “We Are Your Friends.” Along the way she carved out a place in the fashion world, booking top modeling jobs, most notably working with Katie Grand for several Love magazine editorials and walking for Marc Jacobs before landing a spot in his spring campaign. This despite her curvy frame and not-quite-tall-enough stature of 5 feet 7 inches.

Her appearance — cartoonishly beautiful with bodily proportions that rival Jessica Rabbit’s caricature — have also proved to be a hindrance for Ratajkowski in the acting world, as she is deliberately sidestepping the path taken by plenty of “hot” actresses before her — Megan Fox et al. “It’s not necessarily about taking the most obvious, blockbuster, sexy girl part. Those are the ones I get offers on — the dumb hot girl or the girl the girlfriend’s jealous of,” she says over a breakfast of mixed berries and black coffee in New York’s SoHo. “It’s hard because you get those offers and you’re, like, ‘Wow, I’m getting offered a giant movie.’ But I really believe you are what you do and that’s not who I am.”

Who she is, at least to the public, is most visible on Instagram, her account salivated over by the male masses. She currently has 5.7 million followers. Her goal now — or perhaps it always has been that — is to use her visibility on the platform to make her mark on the topic of feminism.

It’s the cause du jour among the young Hollywood guard, isn’t it? From Taylor Swift’s girl squad to Jennifer Lawrence’s charge against the wage gap, female celebrities are all getting in on the conversation. Ratajkowski’s contribution revolves primarily around the subject of sexual expression. In her view, posting nearly-nude selfies isn’t contributing to the objectification of women. Instead, Ratajkowski argues that her nude photos on Instagram represent an act of empowerment and celebration of her femininity.

Her stance has, expectedly, received its fair share of criticism. Just last week, she posted a topless selfie with Kim Kardashian, a gesture of support after Kardashian’s totally nude shot went viral.

“My response to people saying I post oversexualized images is that it’s my choice and there’s an ownership and empowerment through them. When I take nude photographs, I’m not there for the boys. It’s about owning my sexuality and celebrating it,” she continues, sticking her fork into a raspberry. “And it’s my choice and there has to be room for that in our culture and in our world.”

She wrote a Lenny letter, a sort of battle cry against those who’ve shamed her for expressing her sexuality throughout her life. “I see my naked body in the mirrors of all the places I’ve lived, privately dressing, going through my morning routine…I look at my reflection and meet my own eyes. I hear the voices reminding me not to send the wrong message,” she writes. “And what is that message exactly? The implication is that to be sexual is to be trashy because being sexy means playing into men’s desires. To me, ‘sexy’ is a kind of beauty, a kind of self-expression, one that is to be celebrated, one that is wonderfully female. Why does the implication have to be that sex is a thing men get to take from women and women give up? Most adolescent women are introduced to ‘sexy’ women through porn or Photoshopped images of celebrities. Is that the only example of a sexual woman we will provide to the young women of our culture?”

Let’s face it: Ratajkowski isn’t the first celebrity — or regular person for that matter — to clog their feed with shots of themselves looking hot. After all, this is Generation Narcissism where a carefully crafted social media presence is all about putting out the right image — under the guise of “connecting.” Everyone is their own image consultant. She also isn’t the first person to make a buck off her genetically gifted makeup — she is a model and there’s no shame in self-promotion. All models do it. It’s slapping the feminist label on it that gives pause.

Which is why the questions are endless: Why does she feel the need to express her sexuality in such a public forum, if these pictures are, as she says, purely for self-fulfillment and self-empowerment? And where, exactly, does this wave of empowerment wash over her between the cropping and filter selection? How is dwindling herself down to a silent sex object — even if said objectification is self induced — moving the feminist conversation forward? And aren’t we promoting a body ideal that is, to most human beings, unattainable?

Effectively motorboating her followers with Kardashian was in the name of feminism?

This past Thursday, she tweeted a string of statements on the subject. “On another note: [regarding] nude selfies and the politics of my physicality and sexuality: The politics of my body and figure are not my problem.” Then going on to say, “I am not shamed or apologetic of what my body might represent to you,” and “It’s the body I was given. I’m not less worthy of making political points about feminism or fighting for the reclaiming of female sexuality because of it.”

The next day, over the phone, Ratajkowski says, “We’re existing in a patriarchal society, yes, and the standards of beauty are a response to that. That doesn’t mean I need to act outside of it, I can act within it to make a point,” she says. “For example, I wear makeup but that doesn’t mean I’m not a feminist. I may wear makeup that enhances my features [and] that plays into the standard of beauty that has been set up by a patriarchal society but I’m living within it. I’m not wearing the makeup to please men, I’m wearing it to please myself. I also am not growing out my armpit hair in protest of patriarchy. I wear a bra. Those are things that I don’t feel I need to reject to make a statement about my sexuality.”

The disparity between the flat pixelated Instagram entity and the woman is startling. It’s immediately clear how intelligent she is and she speaks so deliberately that it knocks one back for a second. But the disconnect is also largely in the method of the message.

While it’s true Ratajkowski has created noise about feminism and issues of censorship and has voiced her stance, is it really landing? While most of her followers — in all likelihood — merely slobber over the images she posts, those who do comment on her feminist agenda are largely of the hater variety with most reactions ranging from eyerolls to full-on vitriol. It almost seems like the model-actress-vixen-maybe-feminist is falling victim to one of the oldest adages, that of having your cake and eating it, too.

It’s a blurred line, to say the least.