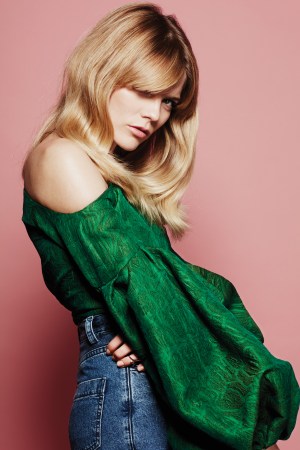 Emma Greenwell has just changed back into her fitted striped T-shirt and frayed jeans after wrapping a photo shoot, and in the process has drawn a gaggle of oglers over her cropped Rachel Comey denim. “They’re coming out with these in black, which is going to be really sick,” she says. “The dark is really good.”

The 27-year-old English actress is set to discuss “The Path,” the Hulu show premiering Wednesday in which she stars alongside Hugh Dancy, Aaron Paul and Michelle Monaghan. But first, there’s some fashion to attend to — she’s just returned from the front row of Miu Miu’s fall show in Paris and it needs to be discussed.

“It was spoiling, it was divine,” she says. “We were out of the show by around 4 p.m., but then there was the dinner with Mrs. Prada, and so all of us sat in the bar of the hotel eating hamburgers, in the most beautiful clothing, trying to keep ourselves pristine.”

Greenwell was born in Greenwich, Conn., to a French mother and an English father; the family moved back to London’s South Kensington neighborhood before her second birthday. She attended the London Academy of Music and Dramatic Art for a year — “It was good, it made me realize that I didn’t want to go to drama school” — before trying her luck at pilot season in Los Angeles. “Shameless,” the Emmy-winning Showtime drama, was her first job. She booked it when she was 22. “I was meant to be leaving on a Saturday to go back to London, and I booked the job on Tuesday,” she says. “I had to rent a car, get a place, and I didn’t end up going back to London for nine months.”

Her arrival onto the American acting scene is, fittingly, something out of a Hollywood motion-picture fairy tale. In the months before “Shameless,” she’d been working as a server at London’s Michelin-starred, Thames-hugging restaurant The River Café. “My best friend growing up was the granddaughter of the owners,” she says. “I really wanted to be the receptionist because I liked to practice my accents on the phone, and I did that a little bit but I think they knew that I was doing that so they were like, ‘No.'”

On her last shift, the night before moving to L.A., she happened to serve André Balazs, owner of Los Angeles’ famed Chateau Marmont and London’s Chiltern Firehouse. “I’d never been to L.A., I had no idea who he was or what the Chateau was,” she says. “My boss said, ‘Oh, Emma’s moving to L.A. tomorrow,’ and André asked what time I got in on Friday and I was like, ‘I get in at 7,’ and he said, ‘OK, come to my party’.”

The casually mentioned party was, in fact, his Golden Globes bash — not bad for a new actress’ first night in L.A. “I was so underdressed,” Greenwell recalls. “I was standing in the penthouse of the hotel next to Cate Blanchett and Quentin Tarantino, it was a crazy first night. And his daughter was then in ‘Shameless’.”

As most Brit thespian darlings do, she’s done the period-piece thing, first in February’s “Pride and Prejudice and Zombies,” and next alongside Kate Beckinsale and Chloë Sevigny in “Love & Friendship,” out in May. But first comes “The Path,” Hulu’s latest full-bodied drama, which is about the personalities embedded in a religious cult and its pathological success. Greenwell’s character Mary is “an incredibly vulnerable girl who gets swept up in the idea of being saved,” she says. “She grew up in a trailer park, her mom died when she was young, and she’s a heroin addict. The show opens where there’s been a tornado through her trailer park and The Path arrive to help out.”

Promoting a show obviously can create more acting opportunities — as well as fashion ones, Miu Miu front rows included. Greenwell, for her part, is a natural scourer. “I’ve only ever bought one designer handbag,” she says, “and I thought that I would like feel something different — which I didn’t — so I don’t think I’ll ever do that again.”