Emma Roberts — along with Laura Harrier, Bruna Marquezine and Chloe Bennet — is fronting the new women’s fragrance Boss Alive, which launches starting in February. The actress shared with WWD her thoughts on being alive, acting and books.

WWD: What does being alive mean to you?

Emma Roberts: The word evokes such a feeling — and it is different for everybody. For me, I feel most alive whenever I’m traveling and get to a new city I haven’t been to, just the feeling of getting to explore and try new things. I remember the first time I went to Paris, with my best friend, and it was the most alive I ever felt.

WWD: What are some things that drew you to the perfume project?

E.R.: When they asked me [to be part of it] I was like: “Well, what’s the concept? What do they want me to look like?” They [said]: “We want you to look like yourself.” And that made me say: “Of course.” How many times do you get asked to do anything where they want you to be yourself? I thought that was such an amazing message to send to all women. 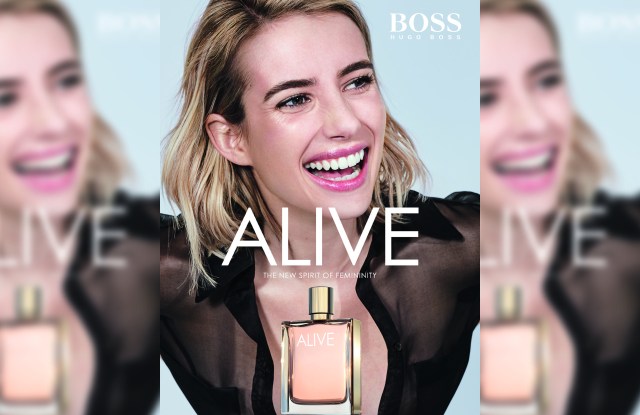 WWD: Do any anecdotes spring to mind from the shoot?

E.R.: Some of it was very surreal. We were driving around in a convertible that was on a rig through Beverly Hills. I remember, having grown up in L.A., thinking how funny it was and crazy that I used to go to school around there, and now I’m driving in a Corvette with the streets shut down.

WWD: What other projects are you working on?

E.R.: What I’m most excited about that I have coming out this year is a Netflix movie called “Holidate.” It’s a romantic comedy. I’m obsessed with romantic comedies.

WWD: Are you also working on other things?

E.R.: I’ve been doing stuff with my book club Belletrist. It’s [my and my best friend Kara Preiss’] book club and a book community. I love to read and recommend. I’m always working on the Instagram, and hopefully we’re going to be developing a couple of shows based on some of the books we choose. So that will be in the long term.

WWD: Which are some books you recently read and adored?

E.R.: I love “The Anatomy of Dreams,” by Chloe Benjamin. It’s a novel that I absolutely devoured in two days. Another book that I was literally canceling dinner plans to finish reading was, “The Light We Lost,” by Jill Santopolo. Cried. Then one of my favorites that we have ever chosen on Belletrist is called “The Rules Do Not Apply,” by Ariel Levy. It’s a memoir that will absolutely rip your heart out.

WWD: Would you ever write a novel?

E.R.: I would love to. I like poetry. I would write maybe a little collection of poetry, but we’ll see.

WWD: What are some types of acting roles that you’ve not yet tried but want to?

WWD: Which directors would you like to work with whom you haven’t yet?