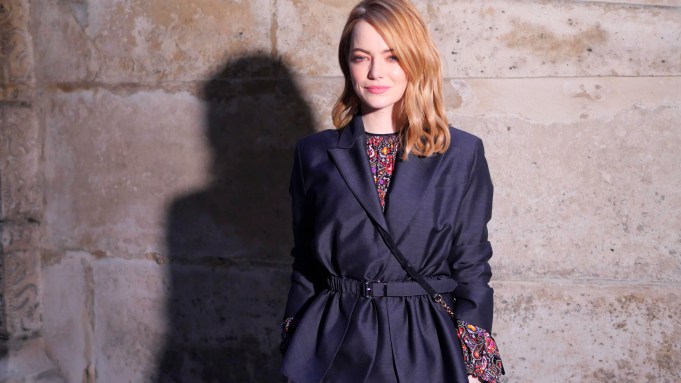 WATCH THIS SPACE: In a powerful juxtaposition of history and future, Louis Vuitton wowed guests at its show at the Louvre on Tuesday with a spaceship-themed runway landed in one of the museum’s courtyards.

Gazing in wonder at the set, surrounded by features including ancient statues of wild boars and wolves, and a pond filled with water lilies, was Ruth Negga, who plays an astro scientist in the soon-to-be-released “Ad Astra,” costarring Brad Pitt, and helmed by James Gray.

Show regular Michelle Williams was equally impressed. “It’s like nothing I’ve ever seen. Every time you think they’ve hit the top, something else comes along to totally take your breath away, more impressive than the last time and the time before that and the time before that,” said the actress, who recently wrapped filming the “Spider-Man” spin-off, “Venom,” with Tom Hardy.

Emma Stone, the brand’s latest ambassador, had already gotten a sneak-peek backstage. “I saw the view from above. I just went back to see Nicolas [Ghesquière], and he was like, ‘Look at the TV.’ So cool,” said the actress. “It reminds me a little bit of ‘Star Wars,’” added Stone, who was sitting next to Justin Theroux, her costar in the TV series “Maniac,” set for release on Netflix later this year. So what was he like to work with? “Oh, is nightmare a strong enough word?” deadpanned Stone, with Theroux chipping in, “Night terror.”

Sienna Miller had flown in fresh from attending the Oscars. But she had the jet lag under control. “Slightly discombobulated, but nothing a bit of TM [transcendental meditation] and a big sleep on the flight can’t help. Motherhood is good training for lack of sleep,” said Miller, who stars in “The Burning Woman,” due for release toward the end of the year.

“It’s about a woman growing up, transforming over time, and life happens and it’s incredibly hard. It’s about the journey of womanhood against all odds,” said the actress. “I live in New York, but to be able to come to the Louvre and have it closed off. This opulence, it’s exquisite.”

A pink-haired Jaden Smith proved the perfect gentleman as everyone clambered on to the runway after the show to congratulate Ghesquière, helping his fellow show guests make their way through. He held his hand aloft as rain pelted down on the show’s temporary tent structure, showering the crowd.

“Raindrops, it’s raining inside,” said Smith. It didn’t dampen his appreciation of the event, though. “I thought it was amazing, everything.”