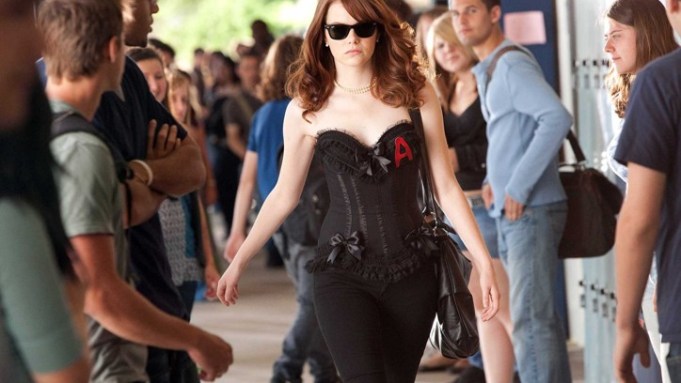 “Easy A,” the high school comedy that hits theaters Friday, is the kind of teenage tale of angst that draws quick comparisons to the oeuvre of Eighties-era John Hughes. And with her red hair and whip-smart wit, star Emma Stone could pass for a latter-day Molly Ringwald. But a remake of “Pretty in Pink” this is not.

“Easy A” casts Stone as Olive, a quirky, precocious type who lives on the fringes of popularity and is seemingly unaware of the effect she has on the opposite sex. When she tells her best friend a little white lie about a romantic escapade, gossip spreads through campus and Olive soon finds herself the school’s resident slut (all the while remaining a virgin). Amanda Bynes plays Olive’s Bible-thumping, abstinence-preaching nemesis, Thomas Haden Church her favorite teacher, Lisa Kudrow a rather troubled guidance counselor and Patricia Clarkson and Stanley Tucci round out the ensemble as her zany, always understanding parents.

The movie has garnered early glowing reviews — Daily Variety poised it as a “potentially career making showcase” for Stone — yet the 21-year-old remains unfazed by the hype.

“I’m pretty realistic about the fact that this could all change. I’m just trying to enjoy the moment,” says Stone, who, while open and friendly, remains tight-lipped on personal details and reports of her romances with musician Teddy Geiger and her “Paper Man” co-star Kieran Culkin. “Trust me, there’s no cameras following me,” she says. “And I don’t Twitter because nobody wants or needs to know that I’m sitting here drinking a coffee, staring at my beige nail polish right now.”

Stone’s right. Her work is exponentially more compelling. She spent the summer stationed in Mississippi portraying the lead role of Skeeter in the movie adaptation of Kathryn Stockett’s “The Help,” co-starring Bryce Dallas Howard, Sissy Spacek, Viola Davis and Cicely Tyson. “It’s such a magical, secret place where they really slow down to enjoy life,” she says of the small town South, where the movie was shot. “I [was living] in a house, with a kitchen, getting eaten by mosquitoes and I loved it. At five o’clock everyone’s got their cocktail.”

Before that, she wrapped the Steve Carell and Julianne Moore comedy “Crazy, Stupid, Love,” where she got to do “my favorite scene ever” with Ryan Gosling. Stone won’t divulge specifics, but it sounds like a slap-stick hook-up with Gosling’s character, a slick swain whose m.o. is to make over Carell’s recently divorced character. Stone also has an upcoming role in “Friends With Benefits” alongside Justin Timberlake and Mila Kunis and an untitled project with Elizabeth Banks.

And unlike others of her generation who seem to expect (and seek out) instant stardom, Stone is quick to express her gratitude for her current wave of work. “I was homeschooled in [Scottsdale] Arizona and I lived in Los Angeles for six years, eating Hot Pockets in my apartment and dreaming of this moment,” she says. “And now that it’s finally here, it’s wild. I can’t believe I get to stay for free at a Four Seasons in Beverly Hills.”