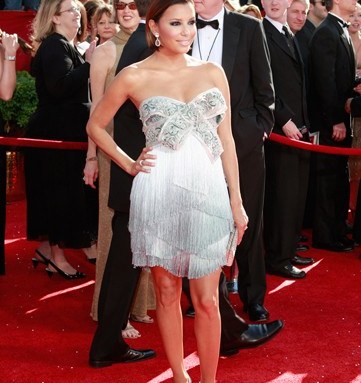 View ALL 23 Photos
Standing out in Red Carpet Land is no easy task. But where there’s a will there’s a way, as many actresses proved at the 60th Primetime Emmy Awards show, held at the Nokia Theatre in Los Angeles Sunday night. While there was a veritable rainbow of solid-colored bright gowns this time round, America Ferrera felt she had pulled a personal best even if she didn’t push any fashion boundaries with her black vintage Werle confection. “I think it’s different than anything I’ve ever worn before,” she offered. Ferrera was not alone in trying something new. “I feel fantastic in this dress because it’s such a senior dress,” said Sandra Oh in a sophisticated Oscar de la Renta number. Another veteran nominee, Rachel Griffiths, chose her vintage Bob Mackie because it reminded her of a “Brothers & Sisters” episode in which she sang karaoke to Cher’s “Believe.” Others in the crowd, however, focused on an oft-neglected red-carpet trait: comfort. “I feel sensual and playful and comfortable in my own skin,” said Debra Messing in Monique Lhuillier. Julia Louis-Dreyfus turned to her favorite standby, Narciso Rodriguez. “I love him because he always sews me right in,” she enthused. But of course, since this is Hollywood, cutting a long, lean line was of foremost concern. “It makes me feel thin,” explained Cynthia Nixon of her Calvin Klein Collection column. Griffiths was more blunt: “I’d like to thank my Spanx. I wouldn’t be anywhere without them.”
Newsletters