The 21-year-old actor, who plays the youngest Lyon son Hakeem on FOX's smash hit, chats with WWD ahead of the season 2 soundtrack release. 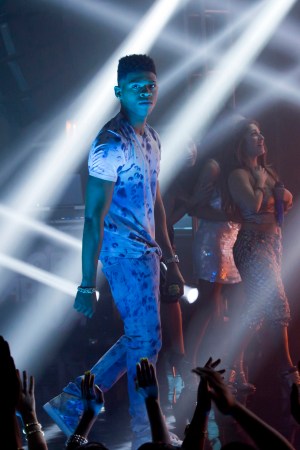 Is there anything bigger than Fox’s “Empire?” (OK, maybe “Star Wars,” but that isn’t out yet.) The drama from Lee Daniels and Danny Strong, now in its second season, has been one of the hottest TV shows since it started airing. From collaborations with Saks Fifth Avenue and front row seats for the cast at New York Fashion Week to a themed line from Hood by Air, the show and its music have taken the fashion industry — and pop culture, in general — by storm. The show follows record label mogul Lucious Lyon, portrayed by Terrence Howard, and features several first-time actors, including one Bryshere “Yazz” Gray, who plays one of his sons, Hakeem, and until about a year ago was a rising rapper in Philadelphia trying to compile a debut album. With “Empire,” it’s all now a different story.

Gray, 21, was raised in West Philadelphia — “where I spent most of my days,” he cracks, quoting his hometown shout-out in the famed “Fresh Prince of Bel-Air” theme song — and prior to acting and rapping professionally, played high school football and worked at a Pizza Hut.

It was while recovering from a football injury that he delved into music, and started to pursue it. “I was in the process of recording an album, I got signed, and from there, I auditioned for ‘Empire,’ and ‘Empire’ just kind of took off and so I’ve been working with ‘Empire’ for about a year now,” he says, in an efficient summary.

His role on the show spawned a record deal with Columbia Records. “When I write music for Yazz, it’s my personal experiences and what’s going on in my life,” Gray, who performs musically under the name “Yazz the Greatest,” explains. “And when I write for the character, it’s all trendy, fun and playful.”

The show draws comparisons to another Fox musical hit, “Glee,” as well as the ABC hit “Nashville.” Much like with those shows, the music of “Empire” has taken on a life of its own; the season one soundtrack debuted at number one on the Billboard 200 charts when it was released on March 10 — beating out Madonna’s “Rebel Heart” album.

On Friday, the season two soundtrack will be released, to much hype. “It’s a good soundtrack, we have some fun records on there,” Gray says. “The music in season two is getting better and better.”

The showrunners have upped the music cred for the second season, bringing in Ne-Yo to work with Jussie Smollett (who plays middle son Jamal Lyon) and Timbaland (the show’s executive music producer) to write with Gray. “It’s amazing working with Timbaland; he’s a phenomenal producer,” Gray says. “He does what he does, he makes magic. He comes into the studio, that mad perfector that he is, and I’m just in the booth, writing lyrics for the cub Lyon. He gives me that special ingredient.”

He’s set a high bar for himself, considering his debut acting job found him in bed with Naomi Campbell, who played Hakeem’s love interest, Camilla Marks, on season one. “She was a doll to work with, she has a beautiful energy,” Gray says of his older on-screen paramour. “She loves fashion, so it was great with our two characters, Camilla and Hakeem.”

While “Empire” has garnered almost equal attention for its fashion as for the soapy drama, Gray insists he takes a much more low-key approach to dressing than Hakeem, who favors Hood by Air and Moschino. “I kind of just throw on whatever I feel like, whatever my energy is,” he says. “To me, it really doesn’t matter what the designer is or the brand is, it’s just about the feeling.”

But, he is quick to admit, “Lyons love fashion.”

He’ll take some time off for Thanksgiving to enjoy “good food, some family love and playing with my niece,” but downtime is few and far between for Gray. “’Empire’ is a great show. I want to keep staying focused on it, keep making an album, and stay focused on my music,” he says. “And that’s about it.”