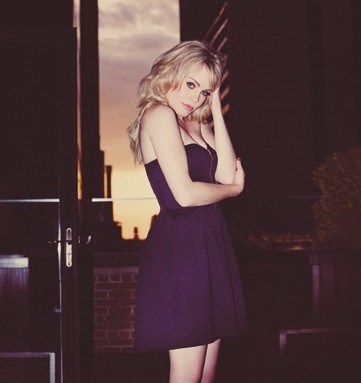 A pixie with a serious set of pipes, the Welsh singer-songwriter Duffy will put her feminine brand of soul into Friday’s fifth annual Fashion Rocks concert, to be held at Radio City Music Hall in Manhattan.

When she released her Northern Soul-inflected single “Mercy” — a fusion of horns, strings and tinkling percussion — in February, that single and her subsequent album, “Rockferry,” shot to the top of the U.K.’s music charts. “Rockferry” later hit number four on the U.S. Billboard chart.

But unlike some of her fellow Brit chanteuses, she seems to have checked any accompanying diva antics and personal dramas at the door. She even takes the grueling pace of touring across Europe, the U.S. and the U.K. over the past few months in stride. “It’s kind of grounding, you know?” says the singer in her melodic Welsh lilt. “To be able to actually focus on the music five days a week is really refreshing and really important, it reminds me what all this is about.”

Not that it’s all work and no play on tour. “I like to have a glass of wine — the occasional sort of letting loose,” she says with a laugh. “[Or] a couple of pints of Guinness — if I can find Guinness — always does the job.”

During her recent U.S. tour, she clocked gigs at Lollapalooza and the All Points West festival in New Jersey, providing her with a whistle-stop tour of the country. “It was hard work because I’m not used to traveling eight hours from one place to another, but I got to see a lot of America,” she says. “I found the people in Philadelphia to be amazing. It was unbelievable, just totally having a great time, everyone was screaming at the top of their lungs, singing along.”

And appropriately for an artist who’s made an equally strong statement with her blonde, back-combed hair and monochrome duds, the singer will round off her U.S. tour experience by playing Fashion Rocks. Duffy won’t yet reveal which of her numbers she’ll unleash on the audience. “I’m doing one track, but we don’t know what we’re going to do yet, it’s not set in stone,“ she says.

And while the singer’s style and sound — along with her moniker, which she takes from her surname — have led to comparisons with one of Britain’s most famous soul exports, Dusty Springfield, Duffy insists that her image is all her own. “I know what I do and do not like. I don’t think clothes should define you, I think they should just enhance your character. I sort of apply that rule to what I do,” she says. “I’ve always loved…vintage, I’m really into the Forties and Fifties, that’s my favorite era, so stylish and cut really well, and it’s kind of very feminine.”

For the singer’s Fashion Rocks performance, she’ll appear as a brand ambassador for Nivea, for which she’s appeared in a series of print ads to mark the concert. Later, some of her tracks will also appear in Nivea television spots.

And belying her thus-far brief moment in the spotlight, she says she’s already au fait with the mugging for the camera that being a spokeswoman demands. “In the beginning, there’s a part of you that thinks, ‘This wasn’t what I thought it was all about,’ you know, but [now] I think that it’s just good fun,” she says. “At the beginning, I used to be really afraid of the camera, but I think what I just realized is that it’s the eyes of the public, just a way of people getting to see me. It wasn’t as though anyone had a gun to my head — [though] you would have thought that at the beginning, that’s how scared I was.”

But despite notching up a beauty campaign relatively early on in her career, she doesn’t plan to roll out her own clothing or cosmetics line just yet. “I would never say never, because you never know, if it was for a good cause,” she says. “But right now I’ve got my hands full, I’m really enjoying the music part of it, I’m not really thinking about branching off or anything. I just feel as though I’m at Day One with everything, really.”