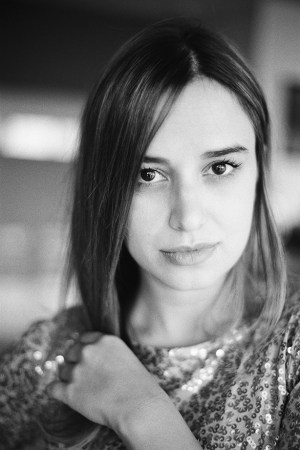 The Moments You Missed from the 2021 Critics’ Choice Awards

“Equals,” out Friday, is a science-fiction drama from “Like Crazy” director Drake Doremus, starring Kristen Stewart and Nicholas Hoult in a dystopian society stripped of emotions. Needless to say, dressing the cast was a tall order for costume designer Alana Morshead. She decided to convey such a mood by crafting minimalist, androgynous looks for Stewart, Hoult and the rest of the cast.

The London-born, L.A.-based designer graduated from L.A. Film School in 2007 and landed in costume design as a hybrid of her passions for film and fashion. After “Equals,” her work will be seen in next year’s “The Hero,” starring Krysten Ritter, Laura Prepon, Sam Elliott and Nick Offerman. Here, she chats with WWD about dressing a world devoid of emotions.

WWD: How did you get involved in “Equals?”

Alana Morshead: I first heard about “Equals” in 2012 — I think in the first draft I read, the women wore long dresses. It was very vague. [But] it’s androgynous, there are no feelings, it’s completely “equal.” Then there was coming up with something that both a man and a woman looked good in and felt good in and was functional. So we went for a very minimal look, kind of like how they live their lives as equals. Their homes are minimal, it’s all about necessity and functionality. [The costumes] were also inspired by the production design because the architecture in Japan, where we shot the film, was so beautiful even though the buildings look concrete and cold far away; when you get up close you see all these tiny details. With the costumes, from afar it looks like a sea of white, and then you get up close and you see this beautiful stitching.

WWD: Were there many variations of what this androgynous look would be?

A.M.: The great thing about sci-fi and working within a completely different world is that you can go anywhere with it. You can create anything you want. But I was always sold on the all-white idea. I just wanted to strip everything away and make it basic; I didn’t want any buttons or zippers, nothing. Everything’s covered; you just have the cleanest, flattest look you can get. It took persuading but Drake [Doremus, the film’s director] was on the same team as me and so we convinced everyone it was the right look. And once everyone saw it on the screen, they were like, “OK, that looks right.”

WWD: Do you have much experience with this genre?

A.M.: No! I have never done anything sci-fi. I have only done a couple of films, but this is how I like to dress, too — I’m into the more simple, minimal. So I took all the futuristic-ness out of it. With the world that they created, there’s not people on their phone or having all these gadgets, everything’s so simple. So I just took all of the technology out of the clothing and made it functional. All of these pieces, either together or separate could be worn today — it doesn’t date.

WWD: A lot of people tend to go into metallics and heavy embellishments when they think of futurism, like what we saw at the Met Ball this year.
A.M.: Yeah, it can go very robotic when you think of sci-fi, like jumpsuits and gadgets and leather and spandex. And I was like, “What if we actually had a world with no emotions today?” I just took it back and went the other way instead of what you think of when you think sci-fi and futuristic fashion.

WWD: What was it like to work with Kristen Stewart?
A.M.: She’s a dream. She really trusts you, once you explain a look — she’s just like, “Got it, cool.” No question. She pulled off the looks so well. Like Nick [Hoult] wears the exact same look as her and she can really pull off the androgynous look just as well. Once she put it on I was like, “‘Ugh! You could wear this out, like put some heels on and go to the premiere like this.”

WWD: What is your background? How did you get into costume design?
A.M.: I went to film school at the L.A. Film School — I knew I wanted to work in film, but I didn’t really grow up thinking I wanted to be a fashion designer. I didn’t really know anything about costume design, I just knew I loved clothes and always loved fashion, but I didn’t want to be specifically a designer — I wanted to be in film. And finally when I was in school I was like I think I can do both!

WWD: In addition to the buildings and architecture in Japan, were there other sources of inspiration?
A.M.:  “Gattaca” was definitely something Drake and I discussed because that is another sci-fi film that isn’t necessarily…it is sci-fi but it doesn’t have that futuristic sense. And then designers I looked to were Chloé, Alexander Wang and some others. Minimalism is such a thing in fashion now, too, so it felt very current. And very easy. And just like street style in Japan, too. You can wear anything in Japan.