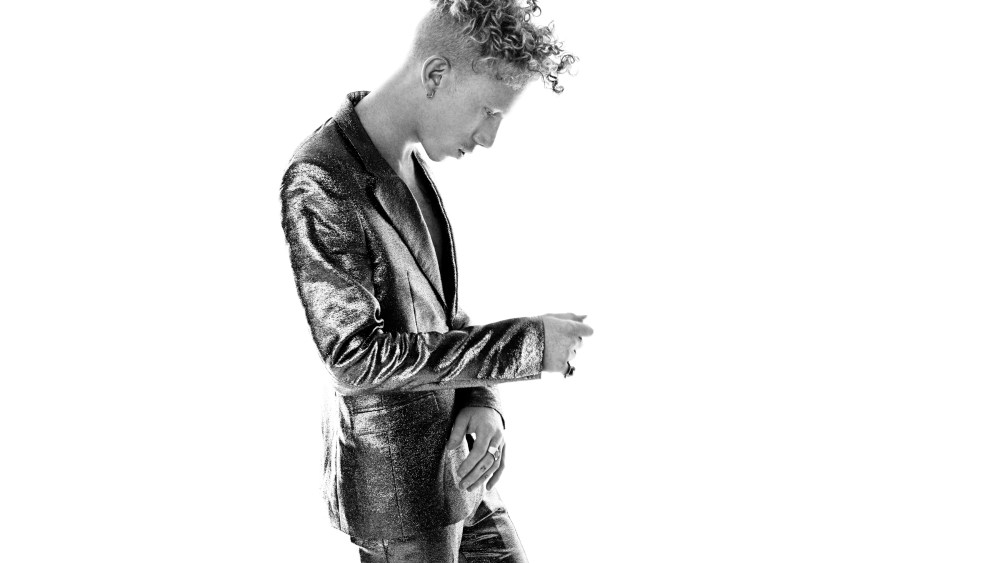 On Wednesday night, an at-capacity crowd filled out Terminal 5 in New York to watch the newest star minted by Sweden’s pop machine, one Tove Lo. But first, they got a good look at the young Swede just waiting to explode next: Erik Hassle.

Age 27 and lanky with a mop of curly hair that recalls Sideshow Bob from “The Simpsons,” Hassle has much to crow about. Though he’s been making music in his native Sweden since 2008 — and songwriting for the likes of TV on the Radio and Rihanna — the past few months have brought him more American attention than ever before: his single “No Words,” from his upcoming full-length album, has clocked 6 million streams on Spotify after shooting up in the global and American viral charts.

On the last day of the tour, he’s sitting in his dressing room at Terminal 5, just hours before he takes the stage, and grabs a Budweiser to discuss his start in music, summers in Sweden, and his latest fan, Taylor Swift.

WWD: How did you get your start in music?

Erik Hassle: The first seven years of my life, me, my mom and dad and my four older siblings lived in a suburb of Stockholm and my mom was very active with directing theater. So I basically grew up at the theater on the floors of the shows, so I was really surrounded with music at a young age. But then when all my siblings moved out, because I’m the youngest, [my parents and I] moved down to the countryside. They made the barn into a venue. And every weekend in summers we’d have shows there, music shows or stand-up comedy mixed with music, and that was only friends of my parents. We could have 30 people in our house when you woke up in the morning, all musicians, and they rehearsed in the living room. And I was always around that, and eventually I started a band so I could play there with my friend when we were sixth graders.

WWD: How were you discovered?

E.H.: I moved up to Stockholm when I was 15 to go to this music school, and in your last year we had a show in the school where all the last-year students would get to do their own show. I was trying to stay away from playing this show, because I hadn’t been to rehearsals, so I slept in and got to school at like 5 p.m. — really bad style, but I knew the show wasn’t going to be any different with or without me. I went up and I sang, and my [now] manager was there and came up to me afterward and was like “I want to meet you.” And that’s where we started. And we’ve just been doing it since then.

WWD: This is your fourth time touring in the U.S. — what have you learned about American audiences over time?

E.H.: I think touring in America lives up to the myth, in all ways of what touring is. So many pretty cities, and it’s pretty easy, compared to touring other places. Like, we had a day off the other day in Providence, and it was nice weather, and I was like, “Wow, this is so good.” I’m fascinated by America. Great crowds — people are very musical. This is also the first tour for me where I’m not only introducing myself, but also people know about me. You feel how it works like that. I feel like it’s starting to become something. In Sweden it happened really quickly back in the day when I started, so I’ve been used to people there knowing who I am. I’ve been getting better throughout the tour [in America], relating to people. At the start I was a bit stiff, and I’m starting to relax.

WWD: Why is Sweden so good at creating pop stars?

E.H.: I think there are multiple reasons, or theories. I was brought into an era of writers. The first time I got into the studio, when I was 17, 18, I got to work with people who were some part of the Cheiron thing, who did all the early Britney Spears stuff, all the early ‘NSync stuff. Max Martin [the music producer], he’s the torch-carrier of Swedish pop success. He’s had more number ones on the Billboards than The Beatles. He and Denniz Pop [cofounder of Cheiron Studios] were doing pretty big things in the U.S., as Swedish writers. They threw that confidence to Swedish pop.

WWD: What can you tell us about your new album, due in a few months?

E.H.: It’s a compilation of songs that came about when I moved to L.A. two years ago, which was a really important step in my life that I decided to go here. I had just finished an album in Sweden, which had taken a long time, and I was only releasing it in Sweden, and it was my second album and it was the first time I had tried to take more responsibility. My band was helping me out for free almost, helping me record in the studio. I had been working on the album in Sweden for two years, and my manager thought it would be a good thing for me to let that go, and go to L.A. and start new. I felt maybe it was better energy to try my own wings a little bit. I started writing so many songs — like 30 songs in the first 30 days. And I was like ‘Whoa, this is so right.’ This is happening by itself. So now it’s been a while, it’s been two years since I started it. So I think that album is going to be like a debut album a bit, of me coming to L.A. and meeting new people. It’s pretty all over the place, like a debut album.

WWD: You’ve characterized your sound as soul — what sorts of music do you listen to as an influence?

E.H.: When I was in London I found house music and techno, and I love that s–t. It’s my go-to music. It’s the closest for me to the old funk of James Brown and the repetitive dance music that I like from the soul music. I’d love to do a live album, like a little bit old school but still progressive, influenced maybe by more electronic music. I like everything, but I don’t know anything about music. So it comes in to a lot of different ingredients. I love hip hop. I’m in a hip hop phase right now, for sure. I loved it as a kid, but I never had the courage to be into that in Sweden. But now I can say, “But this is my music!” I don’t always have to be on what is the newest in music is. I’m slowly educating myself in music. For me, I feel more free in not knowing everything in what I’m doing. You can start making up too many rules for yourself. It should just be love and fun and feeling good.

WWD: Taylor Swift recently Instagrammed a photo naming you at the top of a list of new music she’s loving. What has been the aftermath?

E.H.: That was crazy! My manager said he had never had that much chaos around anything in his whole life. I mean, she had 49 million followers on Instagram two weeks ago [when she posted about Hassle.] It’s just something else. I was at one of the first shows of this tour, and one of the ladies working in the production office stopped me when I was going back to the dressing room and said something cool had happened while I was playing. I think it’s a really good thing to do, to promote up-and-coming artists when you have that power. Big ups.