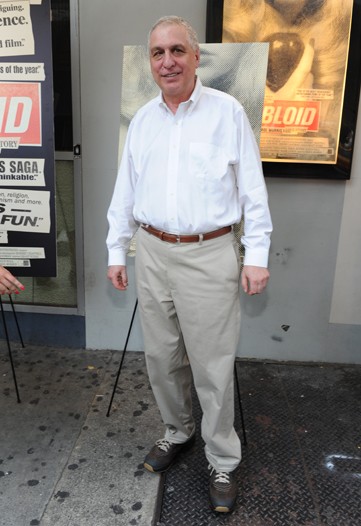 “I don’t generally like anything I do…films, I mean,” director Errol Morris said at a Peggy Siegal Co.-hosted screening of his latest documentary, “Tabloid,” on Monday night. “But, I have to say, I really like this movie. Maybe that means that my faculties are failing me, but I like it. It may lack the gravitas of the Cuban Missile Crisis, but I liked this.”

The film focuses on the story of Joyce McKinney, a former pageant queen accused of traveling to England in the Seventies to kidnap and brainwash a Mormon missionary who was her romantic interest at the time. More accurately it focuses on how the story, dubbed “The Mormon Sex in Chains Case,” played out in the British gossip rags. It’s a tale that features more than one seedy reporter of questionable morals, and is almost too timely, as if Morris had anticipated last week’s meltdown at News of the World, where reporters allegedly hacked into the phone messages and e-mails of crime victims, police and politicians, among other charges.

The fortuitous timing might have had something to do with the enthusiastic audience that packed into the West Village’s IFC Center for the film and subsequent question-and-answer session. Guests included Kirsten Dunst, Spike Jonze, Horatio Sanz, Chiara Clemente, Maggie Betts, a black-tie-ready Courtney Love and nightlife impresarios Matt Kliegman and Carlos Quirarte, who hosted the after party at the Westway.

“It’s the baby in the bathwater argument,” Morris explained to WWD. “I’m sympathetic. We love tabloids. There’s something very deep and essential to tabloid stories. And what happened in that scenario.…It’s not about good or bad, it’s about journalistic excess — and unscrupulous methods where anything goes and anything’s OK.”

The director continued to riff on the primal allure of tabloids.

“Why are we attracted to these stories?” he asked. “I think there’s a double edge to them. The appeal to be really glad that it was something that we didn’t do. Some stories touch us, we can see ourselves in them, as them. Stories which are about everybody and about nobody. The ordinary and the excessive rolled into one nice package.”

Like much of Morris’ past fare, “Tabloid” makes use of unreliable narrators — a term he approves of.

“We’re all unreliable narrators,” he said. “I don’t think there’s any other kind.”