Esther Freud on Family, Ice Cream and the Consolations of the Novel

Freud's ninth novel, "I Couldn't Love You More," draws on the author's family background and on a grim period in 20th-century Irish history.

Not everyone can pop into one of London’s best-known restaurants and order a fancy ice cream dessert named after their father. The novelist Esther Freud can — but she doesn’t, because she’s lactose intolerant. Yet when her father Lucian Freud, one of 20th-century Britain’s greatest painters, was alive, she’d always buckle — and dig into the frosty silver bowl at The Wolseley on Piccadilly.

“It was called Amandine — and it was the most delicious pudding. He always used to order it. He had such a sweet tooth. I always ate some because he could basically get you to do anything,” said Freud of her father who inspired one of the main characters in her latest novel, “I Couldn’t Love You More,” (Harper Collins) which is out in the U.S. on July 13.

The original recipe for the dessert now called Lucian — almond and pistachio ice cream with toffee sauce — remains broadly unchanged, but Esther wouldn’t think of ordering it without him. Plus, she certainly had her share of sweets when her father was alive.

Over an Earl Grey tea and a green juice at The Wolseley, she recalled that when she and her elder sister, the designer Bella Freud, were children, Lucian would sometimes buy them an entire cake and they’d all go home and demolish it. Eating habits were vastly different at her mother Bernardine Coverley Freud’s home, she said, with biscuits doled out sparingly, and healthier food on the menu.

Iterations of the author’s parents often appear in her novels, starting with her first and best known one, “Hideous Kinky,” a ’70s tale of a young, single mother, much like Bernardine, who sweeps her two small daughters off to Morocco in search of spiritual enlightenment. A few years after the book was published in 1992, it was made into a film starring Kate Winslet.

Esther, who is also a great-granddaughter of Sigmund Freud, has mined her family’s past once again in “I Couldn’t Love You More,” imagining what would have happened if her mother, an Irish Catholic teenager who’d had two children out of wedlock with Freud, had she not headed for Morocco. 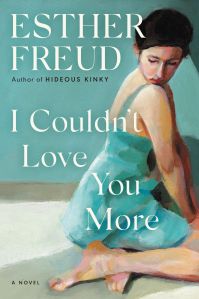 Esther Freud’s new novel, “I Couldn’t Love You More” is out on July 13.

In the book’s acknowledgements, Freud writes that she’s indebted mostly to her “much-missed mother, who, at 18, found herself pregnant and unmarried. Terrified that she’d be discovered and sent to a Home — a workhouse for morally defective women — she kept the news a secret. What would have happened if she’d been found out, or if she’d asked for help from the wrong people?”

She wonders whether Bernardine would have followed the path “of so many thousands of other girls and women,” into the dubious care of nuns who’d humiliate them, force them into backbreaking work, and then sell their babies to adoptive families, or allow them to die.

The novel was published in Britain just a few months after the conclusion of a five-year investigation into Ireland’s infamous mother-and-baby homes where thousands of children born to unwed mothers died between the 1920s and the 1990s. Ireland’s Prime Minister Micheal Martin apologized on behalf of the state and described the period “a dark, difficult and shameful chapter of very recent Irish history.”

The book traces the intertwined stories of three generations of women: Aoife, a married Irish woman who raises her children first in London, and then on a farm in Ireland in 1940s and 1950s; her teenage daughter Rosaleen who has an affair with Felix, an older, bohemian sculptor living in London; and Kate, an artist living in 1990s London with a young daughter and an alcoholic, philandering husband.

“I wanted to write about love, that was the first thought I had,” said Freud, herself a mother of three who remains close to her big sister. “I’d probably be dressed in rags if it wasn’t for Bella,” she admitted, noting that she’s grateful for her sister’s style advice.

Freud was also thinking about her own mother “more deeply, and what it had really been like for her to be single and unmarried in the early 1960s. I looked at the background of the world she came from, and started to investigate the mother-and-baby homes, and read so many devastating things.”

Readers get a glimpse of Lucian in the character of Felix Lichtman, a Jewish émigré from Berlin with a ferocious work ethic — and a love of Soho bars and the South of France. Rosaleen and Felix drink Champagne and devour meals that are worlds away from the teenage girl’s meat-and-potatoes, convent school childhood.

Freud describes one of Rosaleen’s first dinners with Felix in Soho: “’All food should be like this,’ she thought, as sunshine and sea brine slipped down inside her, and she reached for another oyster and tipped it up.”

The book is laced with sweet treats, too.

During their brief stay in the South of France, Rosaleen and Felix buy a bag of “vanilla-scented cakes, eating them straight from the paper, savoring the fluted yellow sponge. Felix told her they made him think of the Sandkuchen he’d eaten in Berlin before the war.”

Later in the story, Lichtman will make a sculpture of Rosaleen in the early months of her pregnancy, a reference to Lucian Freud‘s “Pregnant Girl,” portrait of the 18-year-old Bernardine when she was expecting Bella.

“I did use elements of my father because he’s such an irresistible, charismatic person to create a character from,” said Freud, adding that she gave Felix “more extreme characteristics in terms of his suffering and his compulsion.”

Freud misses her parents, who remained on friendly terms after they separated, and who died within days of each other in 2011. Her impulse, she said, is to write about her memories and feelings, and “all of those lovely things are still there in (my) mind.”

Since finishing the novel, Freud hasn’t missed a keystroke.

She continues to teach creative writing in London — she swapped live lessons for Zoom ones during the pandemic — and is working on a series of interlinked short stories, one of which is called “Desire.” It’s set in 1977 and based on the Bob Dylan album of the same name. Freud said her characters “find themselves in a little strange house in the west of Ireland, and the only record they have there is “Desire.” They know everything about it — and could pretty much stand up on his behalf.”

She’s recently finished reading Nicole Krauss’ short story collection “To Be a Man,” and said it inspired her to write her own. Like everyone, Freud knows that short stories don’t sell as well as novels but she’s enjoying the process, and has sold one of her pieces to The New Yorker.

Writing a short story, she said, offers “a little bit of a lighter experience. Instead of this huge journey [of the novel], you go on a slightly sideways one.”

Freud had trained and worked as an actress right until she started writing “Hideous Kinky,” but hasn’t looked back since, and is a great believer in fiction’s soothing powers.

When she first sent out the “Hideous Kinky” manuscript in the early ’90s, one agent who’d turned it down told her: “’It’s a very hard time in publishing, people aren’t reading so much,'” Freud recalled.

“Ever since I’ve begun, people have been saying ‘Is the novel is dead?’ But no! It will never be dead. There is nothing more sublime and satisfying and self-sufficient as having something you can put in your bag that will save the day when you’re stuck in a traffic jam or on a train. It helps you sleep, it relieves you of worry. Nothing takes over your brain like a book.”