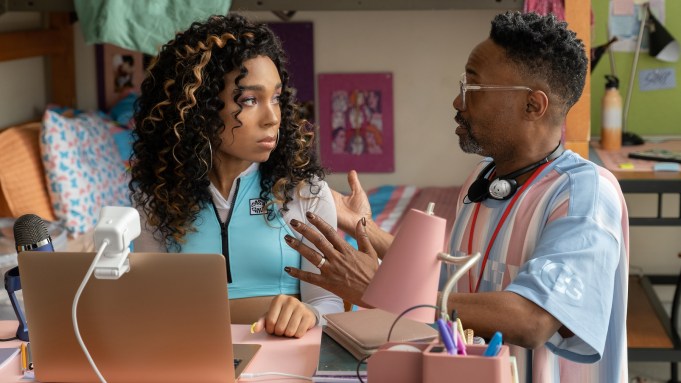 Four years ago, a high school student with a secret crush turned to Reddit for dating advice.

“There is a trans girl [17 F] in my [17 M] school that I can’t get out of my mind,” the post began. The thread went viral — and caught the eye of screenwriter Ximena García Lecuona, who penned the script “Anything’s Possible” inspired by the online conversation. After making the Blacklist, an annual list of the best unproduced scripts, the film landed in the hands of Billy Porter. Out Friday on Amazon Prime, “Anything’s Possible” marks Porter’s directorial debut and the feature acting debut for lead Eva Reign.

“I was like, wait a minute — I think I know about this thread,” says Reign of reading an early version of the script. “When that thread was going viral and everyone was talking about ‘this guy who had a crush on this girl who was trans,’ me and a bunch of my friends were talking about it. It was so interesting to then audition for a project inspired by that.”

The Brooklyn-based actress began auditioning for the rom-com in the winter of 2021 and booked the role at the end of June 2021 — one day later, she flew out to Pittsburgh to begin production on the film. Reign stars as Kelsa, a confident young trans girl who attracts the attention of her cis classmate Khal, who quickly falls head-over-heels. With the support of his fellow Reddit users, Khal musters the courage to ask her out on a date.

Porter has described his “north star” for the project — which is set in his hometown — as joy, and the film stays upbeat even through its moments of conflict. “Billy never wanted even an ounce of trauma to be in this. He was like, ‘I need this to stay happy, stay light,’” says Reign, adding that the vision was to make a high school movie in the vein of a John Hughes film.

“It was such a nice change to see [a film] that was going to be joyous and that was really centering this trans girl’s happiness, and not just trying to heighten her trauma,” says Reign. “This was something I had never seen before, and honestly, something that I didn’t think was possible. I didn’t think a big studio would ever even be interested in something like this.”

Reign recently attended the world premiere with her mother and sister. It was her first time watching the film within a large crowd. “It was very nerve-wracking because I was like, ‘OK. I hope everyone likes it, I hope they think I’m good,’” says Reign of the experience. “It was fun to see everyone’s reactions to everything.”

While the film is rooted in joy, not everyone has been happy with the film’s ending. Without offering a spoiler, Reign describes the ending as authentic, even if it’s an uncommon narrative for the teen rom-com genre. “It’s a very mature moment; a very true to life moment,” she says.

Reign, who’s also established a journalism career writing for outlets like The Cut, Vogue, and Them, first began acting as a teenager in St. Louis, Missouri. “Growing up, I was told that I was talented and all this stuff, but my high school drama director wasn’t very open-minded,” she says. “So being this budding trans person in high school in southern Illinois, it wasn’t really the best fit. So I stopped doing theater when I was 15.”

She was drawn back to acting after moving to New York. “I was sitting with a friend on the beach and she was like, ‘so you live in New York now, what do you wanna do?’ And I was like, ‘honestly, I really wanna act.’ And she was like, ‘OK, so do it.’”

Asked what sort of character she’d like to portray next, Reign offers what at first seems like an unexpected answer: a “witch or a psychic.”

“I was a kid who’s always loved X-Men and always loved movies around magic. I was definitely a Twihard [‘Twilight’ megafan] growing up,” she says. “I think it’s time we see a trans girl play a witch. Which is a very specific thing, but I just wanna name it… I’m just really excited for what the future has.”

As they say, anything’s possible.