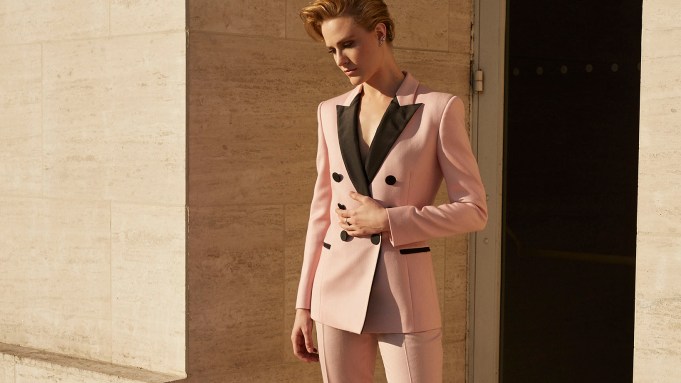 When Evan Rachel Wood walked onto the red carpet at the annual Golden Globe awards in January, where she was nominated for her role in HBO’s fantasy Western series “Westworld,” the simple fact that she was dressed in a suit created a frenzy. A few weeks later, when she again eschewed a dress in favor of a suit at the Screen Actors Guild awards (where she was also nominated), a trend had been cemented.

“I knew that when awards season rolled around I wanted to walk down that red carpet in a Marlene Dietrich suit [and] just take a stance, because I know there’s pressure and I know there’s all this fear involved of not being liked or not being wanted or not making a best-dressed list,” Wood says. “And I just thought I don’t want to live my life like that — and I don’t think other people want to either.”

The role in “Westworld” has provided the 29-year-old with dual opportunities to raise her profile: her performance has been highly celebrated (she is now up for an Emmy, rounding out the season), and the subsequent awards circuit has given her a platform on which to model her commitment to freedom of expression.

Wood is on the phone from California with a nearly lost voice from several days of filming out in Santa Clarita. “We’ve been shooting this really intense sequence for the past week and we’re shooting in the desert, and there’s no service and we have all this stuff to do,” she says, the morning after a long night shoot. “I try to explain it to people sometimes; they’re like, ‘Dude I can’t get hold of you, what’s going on?’ and I’m like, ‘You don’t understand. ‘Westworld’ is all-consuming. Once you’re in, you’re in.’”

The intensity of the show — an average day includes filming in 113 degree temperatures or coming home to “wash dirt and blood off of me every day” — is what has drawn its masses of fans; the series is HBO’s most-viewed first season of an original series to date.

“It transcends the genre that is you think of a sci-fi show — you don’t expect it to be so profound or emotionally riveting,” Wood says of the show’s power. “And I think the themes it touches upon are all eerily relevant. Even though it is science fiction, it still is based in reality, weirdly, and [touches on] where technology is headed and the nature of human beings.”

Her character, Delores, is originally read as the classic damsel-in-distress trope but is revealed to be a much more layered woman. “When the show first came on the scene everyone was really worried because they had seen these images of me getting dragged and [took it as] violence against women and everyone sort of thought, ‘Oh great, here we go again,’” Wood says. “And then it turns out she’s this fierce warrior who is completely breaking that mold and taking a stand and saying no and changing the story.”

The show is tied with “Saturday Night Live” for the most Emmy nominations this year, including one for Wood. The ceremony, on Sept. 17, is the final big awards show for television stars — and the actress plans to arrive in her now-signature suit.

“I knew how I felt as an actress and as a woman, and I figured that if I felt that way, other people must feel that way, too,” says Wood, who has been acting since age 9, including a Golden Globes-nominated role in the film “Thirteen” in 2003. “I remember growing up as a teenager in the industry, there was massive amounts of pressure and a lot of opinions being thrown at you about what is good for you and what is good for your career, that goes against what feels right for you and your identity. I remember being a teenager and doing some photo shoot for a teen magazine and I really didn’t wear dresses — I was very shy and tomboyish and gangly, and had not gotten comfortable in my body yet — and they kept sending me dresses and I kept saying I really didn’t want to wear a dress, and they were, like, ‘You either put the dress on or we’re not taking your picture.’ And I remember doing the photo shoot with tears in my eyes because it was just so f–king uncomfortable.”

Wood is heavily inspired by David Bowie, whom she calls her “high priestess,” and by Dietrich in her top hat and coattails.

“I’d grown up looking at Dietrich, going ‘what a badass’ and that amazing suit that she wore was such an inspiration for me,” Wood says. “I was like maybe if I just go for it then we can start making it OK and have less pressure to feel like you have to fit the mold. And also because it didn’t feel honest to kind of perpetuate that, especially when young women are watching, and they take a lot of the cues from you and pop culture and fashion. So when I found out I was nominated I was, like, ‘All right, that’s it.’”

Wood has worked with celebrity stylist Samantha McMillen since she was a teenager, and together they partnered with Joseph Altuzarra to create custom suits for her various carpet appearances.

“I really admire Evan’s style and confidence to take chances and affect change through her look,” Altuzarra says. “The message she wanted to convey on the red carpet really resonated with me, so to work with her on tailoring options was a special collaborative experience.  She’s such a dynamic individual and her commitment to her look is so powerful, it’s contagious.”

“It’s helping her to express the message that she wanted to send — it was kind of being who you are and wearing what you want to wear and not worrying that you won’t get your picture in the paper or be in the best dressed list because you’re in a suit,” says McMillen of Wood’s choice to wear suits. “Obviously, we try to look our best, but being who you are is the main thing — to be comfortable in what you’re wearing and not being afraid to be yourself and not conforming to what you think everybody has to look like.”

And if equating a red carpet fashion choice with real social power seems trivial, the reception Wood has received this past year — and is likely to see at the Emmys — disagrees.

“Look, I wore the suit and that might seem like a dumb, insignificant thing to some people, but little things like that really do make a difference,” she insists. “Anytime you can put something out in the world that you know people are going to see that might inspire them or change the way they think about something, then do it. Now is the time.”

Laura Dern on Characters and Causes

Tom Bateman, In It for the Thrill of It