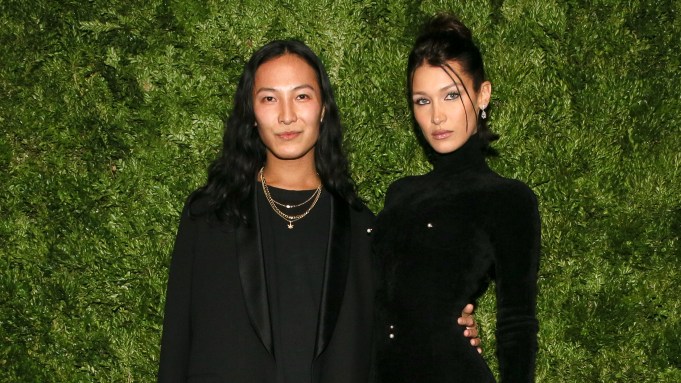 Fashion may be the world’s most widespread form of self-expression, but Monday night’s CFDA/Vogue Fashion Fund gala magnified that theme on multiple fronts.

Designers, models, finalists and other guests were in for more than another is-it-over-yet awards dinner. Roses were in order for Diane von Furstenberg, thanks to presenters Alexander Wang and Prabal Gurung. A group birthday cheer for Anna Wintour was led by last year’s CVFF winner, Pyer Moss’ Kerby-Jean Raymond. But the Vogue editor in chief and Condé Nast artistic director was celebratory about something else. In welcoming the crowd and congratulating the finalists, Wintour said, “I also want to offer all of the finalists my thanks. You’ve made it clear that the path of fashion ahead is bright and filled with diverse ideas and talent.”

This year’s winner Christopher John Rogers’ all-red ensemble was an indicator of fashion’s you-be-you rising ranks. During the post-program celebration, with Champagne flute in hand, the Brooklyn-based designer said Jean-Raymond had advised him from the start, “Just be yourself, because that’s the golden ticket. Your selfness and authenticity — every little nuance and idiosyncrasy that you bring to the table is important. That’s just what I’m trying to do — embrace myself and my team and all the people who have supported me.”

Nearing his third year in business, Rogers “absolutely” knew where some of his $400,000 prize money was headed. “Right now we all are doing this kind of on a voluntary basis, so we’ll definitely be paying ourselves a bit with the funds. We’ll be investing in even better fabrics and even better processes for developing the products and the clothes, and just truly building the business,” he said.

During cocktails at the JD.com-supported event at Cipriani South Street, there was talk of the demise of Barneys New York, Zac Posen’s unexpected shuttering and the forever-changed consumer. However seismic the landscape has changed, several guests were energized by the prospect of ingenuity, using their fashion skills in unexpected disciplines and the creative freedom that entails.

Costa folded into the pre-dinner crowd and momentarily lost sight of his guest Marina Testino, who wore a sustainable floral one-shouldered dress from the Marcia label. As for any advice that stayed with him, Costa said, “Calvin [Klein] said to me at one time, ‘There’s not a right thing or a wrong thing. There’s a right time and a wrong time.’ I didn’t know what he meant at the time, but now I do,” adding that he would love to do fashion again, but in a different way.

The Costa Brazil founder said he plans to come back to fashion one day. “It’s in the cards for sure.”

Introducing the evening’s fashion show, Jean-Raymond recalled his own anticipation before last year’s announcement. “I also remembered the group fashion show. It stuck with me because it was a reminder of the bond formed between my fellow finalists. I hope it does the same for you.”

It is safe to say the CVFF finalists — and the entire crowd — would remember the 15-minute effort, as various vignettes featuring ballerinas, dancers, performers or models dashed between dinner tables  wearing designs by the finalists. Flamenco dancers showed off Alejandra Alonso Rojas’ designs. Hillary Taymour’s Collina Strada collection caught a lot of attention, chiefly because the first model had a fresh take on snakeskin — entwined in a living, breathing snake. Abdul Abasi’s and Greg Rosborough’s Abasi Rosborough looks wrapped up the immersive show, thanks to “Stomp!” performers who lived up to the troupe’s name. Guests also saw the creations of Rogers; Danielle Hirsch; Reese Cooper; Victor Barragán of Barragán; Raffaella Hanley of Lou Dallas; Siying Qu and Haoran Li of Private Policy, and Natalie Ratabesi of Tre by Natalie Ratabesi. A blizzard of metallic-looking confetti then fell from the ceiling.

“Oh my god, what was that?” Graham asked from the stage. “That was amazing.”

With that, the $150,000 runners-up awards were presented to Hirsch for her bridal collection Danielle Frankel, and Cooper for his signature men’s and women’s wear. Hirsch acknowledged the indie spirit, saying, “I never even really thought that bridal would even be considered.”

Cooper was also a bit bowled over, telling the audience, “I did not expect to get this far in the first place. To be here is the coolest part about it, whether we win or not….I’ve said all along the whole time that I feel like we got in here by sneaking in the back door. I guess it paid off.”

Lil Nas X, Tan France and Judith Light were familiar faces to the pre-dinner crowd. A few actors from “The Inheritance,” Matthew Lopez’ two-part show that opens on Broadway Nov. 17, undersold their talents. “We’re in a play. It’s called ‘The Inheritance,’” one explained to a guest, who left them befuddled with, “Wow. It’s like the Academy Awards here tonight.” Not exactly, but the actors could relate to the value of long-lasting career advice. Andrew Burnap said, “A teacher once said to me, ‘Do not waste your suffering.’ That is the number-one best advice I’ve ever been given.”

His castmate Kyle Soller offered, “I live by a Samuel Beckett quote, ‘Ever tried. Ever failed. No matter. Try again. Fail again. Fail better.’ We’re not allowed to fail in life. We should be able to.”

Afterward, other guests shared some lasting advice. Bella Hadid said, “A lot of people honestly told me to truly be myself. You don’t realize that until you’re in the moment of not being yourself. So today to see all of these really incredible designers, it makes me feel like it’s really OK to be yourself. Everybody just comes out with their own ideas and what is very personal to themselves. It’s really exciting to see everybody in their own zone and in their own moment. I’m really realizing that it’s OK to be myself.”

True to his irreverent approach to fashion, Jean-Raymond said the best advice he received was, “Don’t take any advice. Yeah, it worked. I’m serious. My father said, ‘Trust your intuition first and support it with data.’ There are two types of advice. There is advice that is unfounded [as in] well, I think this would happen if this and this…and there is experiential data. So I back up my intuition.”