The rapper and actor has created a Rock the Bells line that reimagines the history of hip-hop fashion.

LL Cool J in a look from his Rock The Bells collection.

It’s a far cry from the streets of Queens, N.Y., to the stage at the Kennedy Center, but that’s the path that James Todd Smith — better known as LL Cool J — has taken.

LL Cool J, who started his career as a rap artist as a teenager and now stars in the CBS series “NCIS: Los Angeles,” has appeared in scores of films and television shows, and in 2017 was the first rap musician to receive a Kennedy Center Honor for lifetime artistic achievement.

But while his accomplishments are many and varied, he hasn’t forgotten his roots.

On Tuesday, LL Cool J will launch Rock the Bells limited-edition apparel and accessories, a collection of T-shirts, hoodies and jackets that speaks to the heritage of the hip-hop movement. Rock the Bells was the title of a hit song in 1986 that the entertainer has parlayed into a number of arenas, including a classic hip-hop channel on SiriusXM satellite radio that launched in 2018.

“We’d been trying to get the station going for five years,” he told WWD after wrapping the day’s shooting on the set of “NCIS: Los Angeles.” But since the station made its debut two years ago, “it blew up,” he said. “We realized that classic hip-hop had not been presented to fans in an authentic way and realized that they wanted more.”

That also translates into their apparel with many fans of the music seeking out authentic reinterpretations of the looks that defined the original hip-hop era.

LL Cool J said Drop 1, which will be offered on the Rock the Bells’ web site starting Jan. 28, will reference the four pillars of hip-hop: graffiti, DJs, breaking, or break dancing, and MCs, the rappers who put the musical genre on the map. “We’re staying true to where the culture came from, but reimagined for now,” he said.

“When I recorded Rock the Bells in 1986, my heroes were people who embraced and lived the four elements of hip-hop. Drop 1 honors that spirit, while looking through the lens of current culture.” 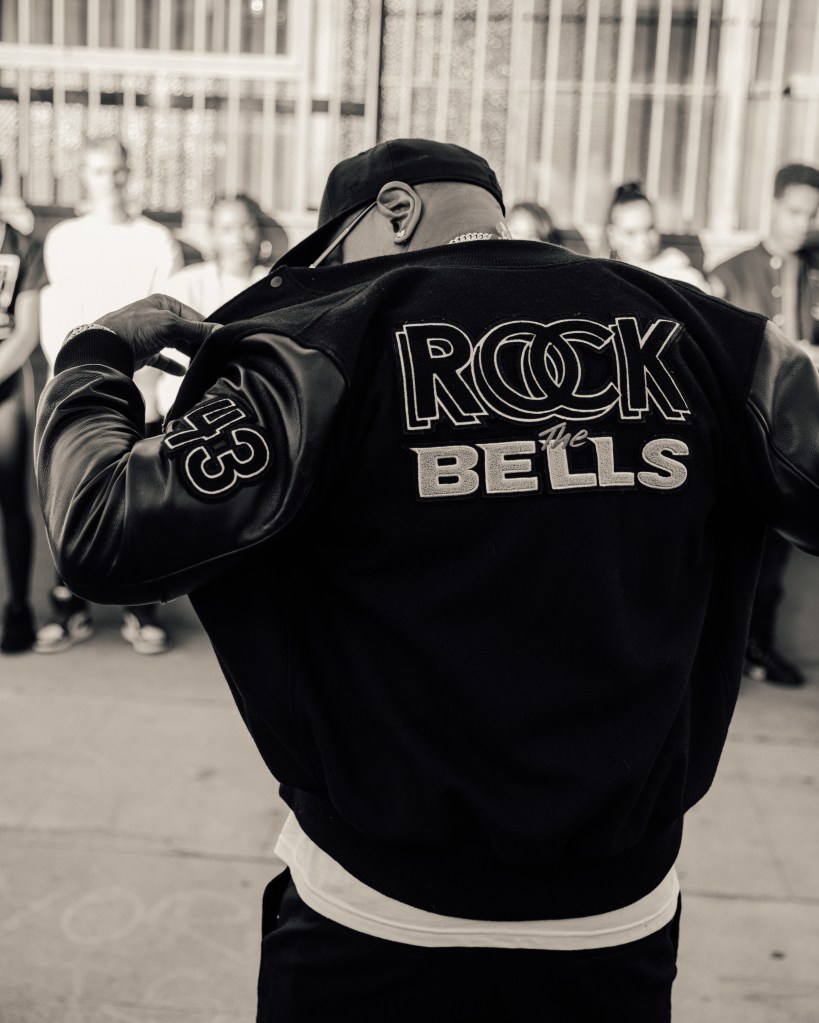 The actor sporting the varsity jacket.

He said the collection was created by the Rock the Bells team, “but we give the culture the real credit for the design,” he said. “It’s true and real and we really lived it.”

Each piece has a story, such as the Fat Cap T-shirt, which refers to the larger caps graffiti artists borrowed from oven cleaners to get a wider arc for their spray-painted creations. The shiny medallions worn by Kurtis Blow, Big Daddy Kane and Slick Rick are used on hoodies.

But while he’s passionate about the whole collection, LL Cool J is perhaps most excited about the logo for the line, which was created by artist Shepard Fairey. “I called him myself and asked him to design the logo,” he said. “It really captures the energy of the original song and the brand in general. It’s really dope.”

LL Cool J said his personal favorite is the Rock the Bells x Roots varsity jacket, which was inspired by the piece he wore to the launch of the radio station. “It’s amazing,” he said. “It’s a classic jacket that has a nice blend of leather and cotton and has the number 43 on it, which is the number of the SiriusXM station. It reminds me of the original days when the Def Jam artists had jackets like that. That was a big part of the team-building and culture.” 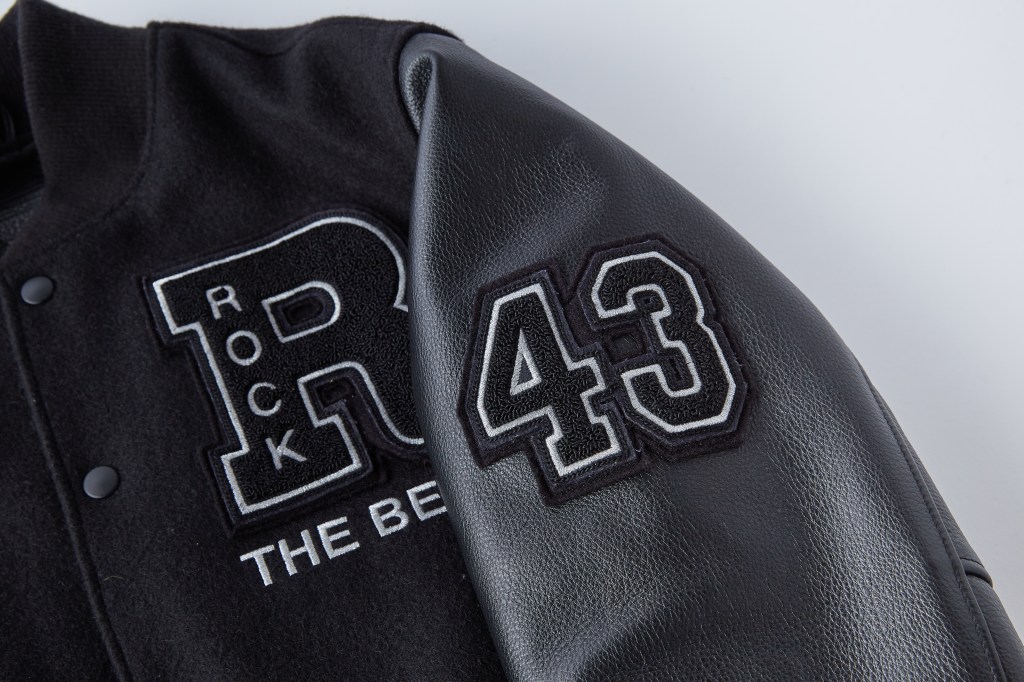 The logo was designed by Shepard Fairey.

He’s also partial to the medallion hoodie. “It looks like you’re wearing big gold chains,” he said, but the jewelry is actually printed onto the piece. “Chain jewelry was part of the culture from Day One,” he said.

The “drip Ts” designs is an “ode to graffiti. “That actually predates hip-hop,” he said. “People were writing on the streets and wanted their names out there.” The message on the 4 Elements sweatshirt features Mellie Mel’s microphone, Flash’s turntable, Crazy Legs’ dance floor and Lee’s spray can, four iconic elements of the era. “If you know, you know, if not, it’s just a cool shirt,” he said. “Everything is truthful.”

Although LL Cool J has transcended the hip-hop scene with his successful career, he said his roots are always evident.

“You’ve got to be yourself and I’m just being me,” he said. “The Kennedy Center Honor was the highest honor in America and I still wore my two-finger Cool J ring with ice on it. I don’t pretend to be someone else. I’m an authentic person.” 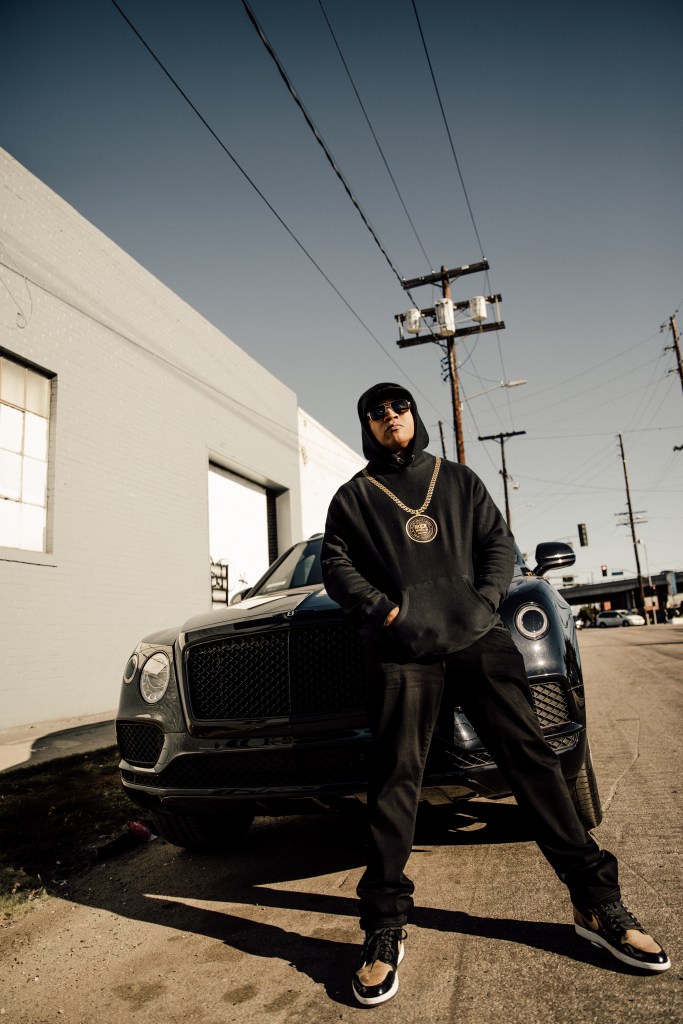 LL Cool J was one of the originators of hip-hop culture.

This is not LL Cool J’s first foray into fashion. Back in 2006, he teamed with Sears on an urban apparel collection. In addition, his “NCIS: Los Angeles” costar Chris O’Donnell is the brother of Johnnie-O founder John O’Donnell. “It’s all in the fam,” LL Cool J said.

Although he has done everything from host the Grammys and the American Music Awards to walk many a red carpet to promote his projects, for right now, his primary focus is Rock the Bells.

“There are a lot of cool things coming. Stay tuned. This is just the beginning.”