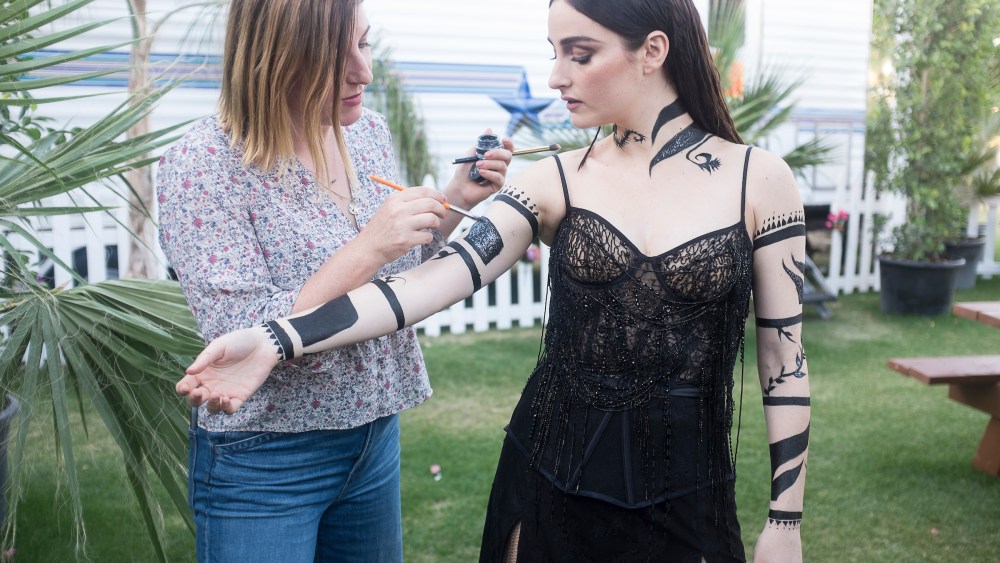 Much hullabaloo is always made about Coachella Weekend One, but it’s Weekend Two when many artists hit their stride — not to mention when most celebrities like to come to enjoy the concerts instead of press-laden parties. Banks, née Jillian Rose Banks, is one such artist. During her coveted 7 p.m. (aka sunset) performance slot on the main stage, she also unveiled an edgy new body makeup look by her longtime makeup artist, Rachel Goodwin.

Goodwin, known best for her red-carpet work on Oscar winners Emma Stone, Brie Larson and Alicia Vikander (you can’t get much better than that), is also an artist at heart, so she took WWD backstage for an exclusive look as she created the body — and face — look for Banks hours before her Friday night show.

“We’ve worked together for over three years and she’s a super interesting artist,” said Goodwin of Banks. “I love sitting down with her and coming up with ideas and visuals. I love her sensibility and we speak the same artistic language. We love to delve into feelings and emotions and rituals, so with her shows we were talking about it for a while.”

The pirate theme came from the embroidered Alexander McQueen pieces her stylist Christian Classen chose for her performance, in particular the black lace bustier dress embellished with sea life motifs that she wore to open the show. The look dovetailed perfectly with the darker, Goth-like vibe Banks was going for with her new album, “The Alter.”

“I wanted to create something that had this ritualistic feel that’s really where she’s at. It’s like an empowerment feel, this sort of witchy woman vibe we’ve been having a lot of fun with,” said Goodwin, noting that last week’s look was different, a more futuristic, glittering modern approach, whereas Weekend Two was “more earth goddess.”

“Once I knew what she was going to be wearing that I looked at the embroidery themes that were going on in that collection and I took a lot of my inspiration from that. All the pieces had this sort of shipwreck feel so we were riffing off of that. I didn’t go as far as taking the anemones and sea horses, but I wanted it to have this flowy feel.”

Goodwin also added her own touches, such as the “sinister vine” that winds around Banks’ neck like a choker. “I wanted it to have a carnivorous flower feeling, almost like she’s being swallowed or devoured by this thing.”

Goodwin sketched out her plan for Banks’ arms and neck with a waterproof black pencil and used tape to make lines for the shapes, then went over it with waterproof paint made from acrylic and glue.

“This was really challenging because I needed it to stay on. It was much hotter than last weekend, like 100 degrees. She was also going to be wearing at one point this heavily beaded velvet jacket that she’d also be taking off,” Goodwin noted.

On Friday, she created all the looks freeahand, which took about three hours, including drying time. She also added layers of glitter gel to some spots to bring out dimension on stage.

When it came to Banks’ face makeup, Goodwin went for a fresh and easy look.

“For her face, I wanted there to be a duality between the tough and sinister feel of the body and this ethereal lightness, so I used soft colors like pale and shimmery pinks that really picked up the sunset light and gave her flushed cheeks and let her freckles come through. I just defined her brows and cheekbones with a little bit of bronzer but I was really the juxtaposition of the two that made it really beautiful. There are two women that live inside her a lot and our approach to her beauty is always coming from that place,” she said.

Goodwin, who is director of pro artistry for Nars, used the brand’s Radiant Creamy Concealer on her face; Dual Intensity Blush in Fervor on her cheeks; Sun Wash Diffusing Bronzer in Laguna on her cheekbones; and Dual Intensity Eye Shadow in Cassiopeia, and Velvet Lip Glide in Unlaced.

She was tickled to get to show her more arty side with Banks. “People always focus on the end result, but not a lot of people talk about how you get there. Banks is one of those people who’s really fun because we have so much fun planning it out. Plus there’s this heightened energy of being in the desert, this magical feeling that you can’t explain.”