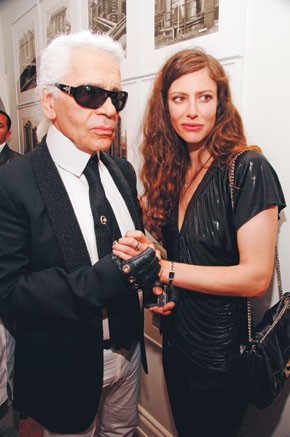 MIAMI — “Is he here yet?” Zoe Kravitz wondered, waiting for Karl Lagerfeld’s arrival at the Chanel-hosted dinner at Casa Tua Wednesday night. “I am sure he will make some entrance.”

Kravitz couldn’t have been more on the money. Even with the presence of Diane Kruger, Anna Mouglalis, Irina Lazareau and Barbara Becker, Lagerfeld’s arrival sparked a flashbulb frenzy worthy of some of the best red-carpet moments.

The designer was being feted on the eve of his new cruise collection, which was unveiled at the Raleigh Hotel Thursday night.

“This is my favorite restaurant,” said Kruger. “I was in Los Angeles and on my way to Paris, so this was a perfect stopover.”

Like many others who flew in for the occasion, Kruger planned to top off her tan. Mouglalis, meanwhile, had just arrived from Paris earlier in the day, but already found the time for some R&R. “I took a good bath in the ocean, which is great,” Mouglalis said, adding she couldn’t help but marvel at the Miami scene. “I love the contrast of the Art Deco buildings with the architecture the people here redesigned for themselves,” she mused. “There are so many fake faces, fake boobs and fake muscles.”

The dinner was almost like a family affair. Just before the first course was served, Lagerfeld decided he wanted to dine alfresco, and his dinner companions, including Kruger, Stephen Gan, Ingrid Sischy and Sandra Brant, joined him at a large, candlelit table outside. The city’s casual vibe seemed to mesh well with the designer: At dinner, he took off his ubiquitous black shades, and when the party ended past midnight, he and his entourage decided to walk back to the Raleigh.