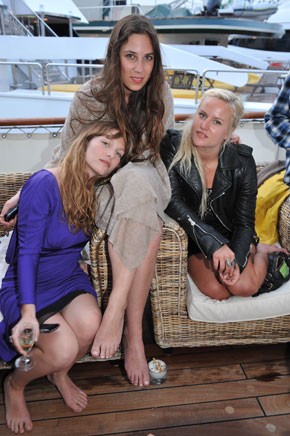 CANNES UPDATE: The pouring rain didn’t keep Alberta Ferretti from playing hostess Tuesday aboard her yacht Prometj. “It wouldn’t be Cannes without all these strong, modern women here,” she said of the cast of “Che,” the four-hour long Steven Soderbergh biopic starring Benicio Del Toro that premieres here Thursday. Catalina Sandino Moreno, Franka Potente and Julia Ormond, who play the three pivotal women in the revolutionary’s life, sipped Champagne and mojitos on the bobbing deck.

Moreno dressed down for her role as Che’s wife. “Hell no, I’ve got no vanity about looking gritty on screen,” she said. She and the other guests cleaned up well for the festivities, also attended by French starlets Zoe Felix and Aissa Maiga. A gaggle of Euro socials – including Tatiana Santo Domingo, Olympia Scarry and Josephine de la Baume – also cozied up on deck, which was covered by a canvas roof. “I’m not working here,” said Santo Domingo, who is said to be “helping out” at Vanity Fair. “We’re on holiday.”