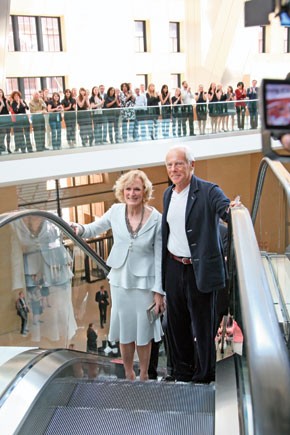 Looking no worse for wear after the Costume Institute gala at the Met, the designer did a question-and-answer session at the Fashion Institute of Technology early in the day, then headed uptown to the Hearst Tower, where the Couture Council of The Museum at FIT gave him the first Couture Council Award for Global Fashion Leadership. When he and Glenn Close ascended the escalator, dozens of black-clad men and women broke into applause. A Swarovski-sponsored luncheon hosted by Harper’s Bazaar and its editor in chief, Glenda Bailey, attracted the likes of Sarah Larson, Eugenia Silva and Ziyi Zhang.

This story first appeared in the May 7, 2008 issue of WWD. Subscribe Today.

“I actually made the worst-dressed list before I met Mr. Armani,” Close admitted.

Against the backdrop of the skyline, Armani couldn’t help but show his appreciation for Manhattan. “It is a very beautiful city, and I found it even more beautiful this time,” he said.

As he prepared for his return to Milan later that afternoon after his three-day stopover in New York and a vacation in Antigua, he was left with one question: “I would like to ask Nadja Swarovski how I can get through security with this?” Armani joked, referring to the award.

At FIT, students greeted him dressed in black T-shirts with “I Met Giorgio Armani” on the front and “at FIT” on the back.

The designer told the group, “You must not take advantage of people who are willing to live off fashion. Keep in mind that the goal of your product is the same goal I have had for so many years — to improve people’s image through fashion. You must remember that fashion serves a purpose: to make people feel more attractive when they get up in the morning, get dressed and look at themselves in the mirror.”

Before Armani left, the students gave him a T-shirt that read, “I Met the Students at FIT.”

But Armani’s trip to New York was as much business as pleasure. After touring the site of his upcoming Fifth Avenue flagship Sunday, on Monday he drew a crowd of 500 to Saks Fifth Avenue for a signing of Roger Hutchings’ book, “Armani Backstage.” “We were originally scheduled to have Armani back on 9/11, but we haven’t had him since, so to have him in our flagship store is a very special event,” said Stephen I. Sadove, Saks’ chairman and chief executive officer. The Armani products are in 38 Saks doors.

Since Friday, retail sales for the L’Oréal-owned brand totaled more than $100,000, according to industry sources. Armani unveiled a prototype Armani beauty counter, and L’Oréal plans to roll out the new design to all stores over the next few years. The redesign is expected to increase sales up to 25 percent, said Stephane de la Faverie, general manager of Giorgio Armani Beauty.

“This is a significant step up in Giorgio Armani’s beauty business development,” said Laurent Attal, president and ceo of L’Oréal USA. “The business has a lot of potential in the U.S.”