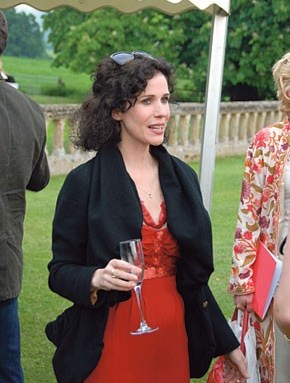 London’s fashion and art crowd decamped to the wilds of Gloucestershire on Saturday to take in a series of sculptures dotted amidst the grounds of the Elizabethan Sudeley Castle as part of an exhibition called “The Artists’ Playground, Reconstruction #3.” One of the most buzzed-about works at the party, which was cohosted by Phillips de Pury and Chanel, was a maze of steel mirrors placed in the shadow of the Cotswolds castle, by Danish artist Jeppe Hein.

“I’ve been having fun with the mirrors, but they’re not very flattering,” said Rosamund Pike. “I beat a hasty retreat,” she laughed.

Guests including Astrid Muñoz, Allegra Hicks, Jessica de Rothschild, Justin Portman, Alfie Allen and Jaime Winstone joined the exhibition’s curators Mollie Dent-Brocklehurst — the castle is her ancestral home — and Elliot McDonald, to take a tour of the 14 acres of lush gardens. Pieces on show included an eerie fiberglass sculpture titled “Kids on a Tomb” by Kevin Francis Gray and an ornate wax turret by Henry Krokatsis “growing” out of one of the castle’s trees.

After dining on roast beef and asparagus, guests took to a checkerboard dance floor, sipping Champagne and Pimm’s as they rocked out to tunes from the “Bugsy Malone” soundtrack and The Gossip. “I lost all my records when I DJed on my birthday,” said an anxious Henry Holland, who was at the decks with Alice Dellal. Though impressed as he was by the surroundings, Holland made it clear he wasn’t bunking down at the castle. “My room’s the one without the roof,” he said, gesturing to the uninhabited, 11th-century ruins.