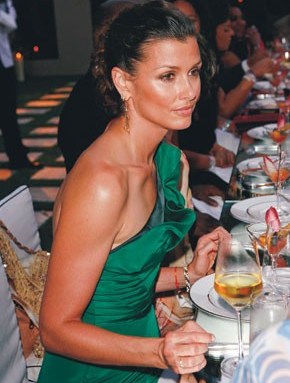 Cartier held its third annual Loveday dinner at the Los Angeles home of Bill and Maria Bell on Wednesday night, achieving the rare feat of perfect attendance by every Love Ambassador embossed on the invitation. Ashanti, Common, Hilary Duff, Eve, Fergie, Janet Jackson, Joel and Benji Madden and Emmy Rossum strolled around the grounds of the Wallace Neff-designed Bel-Air mansion, once the home of both Elvis Presley and Prince Rainier. “It’s great to see everyone here tonight, and even better that we don’t have to sing,” said Fergie. “I’m just playing a few dates this summer and giving myself some time off. I could play tons of dates and make millions, but who needs that much money?” Instead, Diana Ross treated the crowd to two songs on the terrace after dinner.

Meanwhile across the country, the New York State Theater at Lincoln Center was packed for Damian Woetzel’s final performance with the New York City Ballet. Anne Bass, Michael Eisner, Barry Diller, Graydon Carter and Lesley Stahl filled the house to see the star dance Jerome Robbins’ “Fancy Free” and George Balanchine’s “Rubies” and “The Prodigal Son.” For his final bow, confetti rained down on the stage as Woetzel took half a dozen curtain calls, received a 10-minute standing ovation and was given enough flowers to outfit the entire Tournament of Roses parade.

Afterward, Woetzel’s wife, Heather Watts; Fran Lebowitz; Bruce Weber, and Alba Clemente headed to O’Neal’s. “As Mel Brooks said, I feel ‘surprisingly good,'” Woetzel said, downing a beer per his regular postshow routine. “It’s very much a ritual [to come to O’Neal’s]. My table is up there in the corner.”

On Tuesday, Viktor & Rolf turned London’s Barbican gallery into a dollhouse, with their past collections displayed on scores of porcelain dolls. Guests became very nostalgic. “I filled up when I saw it,” said singer Róisín Murphy, who was dressed in a pink baby-doll dress with a PVC Pierrot collar from the Dutch design duo’s spring collection. “It’s a little girl’s dream.”

Murphy joined hosts Viktor Horsting and Rolf Snoeren, Princess Mabel van Oranje-Nassau, Roland Mouret, Hussein Chalayan, and Zadie Smith. In lieu of a red carpet, the crowd traipsed in on a black one strewn with pink rose petals — in reference to the designers’ Flowerbomb fragrance — and drank rose martinis with pink petals floating in the glasses.

Earlier in the week, a crowd descended on the Getty family’s estate in Wormsley, Buckinghamshire, England, for the De Beers Cricket Cup in support of Tara Getty’s Africa Foundation for African communities and conservation.

Ben Elliot, Imogen Lloyd Webber, Matthew Freud, Kelly Hoppen, Rupert Murdoch and Emily Oppenheimer sipped Champagne and Pimm’s while they watched teams play on the late John Paul Getty II’s private cricket pitch. But not all the guests were there for the sporting action. “The last time I played cricket, it was the last time I could see my feet,” joked Clement Freud.